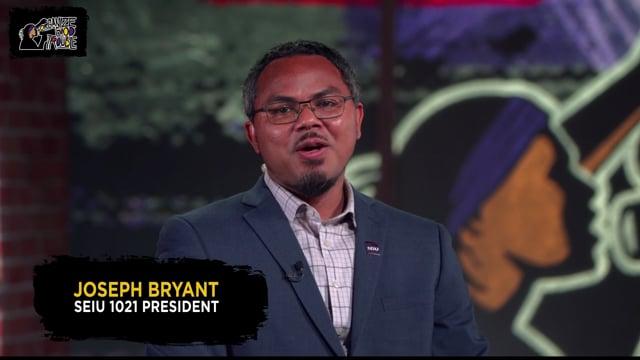 Saturday, September 25, 538 voting delegates and rank and file members, staff, and guests showed up for the SEIU Local 1021 Virtual Convention for four hours of powerful talks from special guest speakers, discussion and debate, as well as some entertainment and fun. The task before the voting delegates: to lay out the union’s priorities for the next three years.

The theme of this year’s convention was “Organize Good Trouble,” in a tribute to the late civil rights leader and Congressman John Lewis, whose life “gives us a blueprint for how to get into the kind of good trouble we need as we plan for the future,” as SEIU 1021 President Joseph Bryant said in his opening remarks—a roadmap that is the logical extension of important gains and accomplishments the union has already made.

“Since the last convention, our union has developed emerging new leaders, staged powerful strikes, and taken on our employers to win strong contracts. We passed ballot measures to secure almost $1.5 billion in new revenue for our services and elected candidates who share our values,” he detailed. “We led coalitions with other unions and community organizations to mobilize thousands of people into the streets after the murders of George Floyd, Breonna Taylor, and Ahmaud Arbery to demand police accountability and justice.

“We have marched for climate justice and called out the biggest polluters in our communities,” President Bryant continued. “We are pursuing transformative organizing campaigns in sectors like fast food and the gig economy so that we can raise the floor for working families everywhere. Throughout the COVID crisis, we’ve fought off concessions and the threat of thousands of layoffs while protecting the health and financial well-being of members. We made sure members had access to adequate PPE and won additional COVID-19 leave above and beyond what was allotted by the state and federal governments. We have also made huge strides, including winning over $300 million dollars in total pay increases for members across our union since the last convention.”

Saturday’s event was actually the culmination of months of hard work and lively debate by the convention planning team, including 1021’s elected leaders and hundreds of delegates. Through an iterative, highly participatory process, the planning committee discussed, drafted, amended, edited, and finalized the six planks of the 2021 convention platform: racial justice; economic justice; environmental justice and climate action; unions for all; member unity and power; and reclaiming our democracy.

Consistent with past conventions, these planks were presented for an up-or-down vote. All six were approved by an average of 95% of voting delegates—a powerful consensus on where 1021 will focus its organizing efforts and resources, and on the priorities we will lead Northern California unions, working people, and partners on.

You can learn more about each of these six planks and watch their presentation at the convention at the links below:

Despite being held online due to the ongoing covid19 pandemic, the SEIU 1021 Virtual Convention was a huge success, with strong member turnout, high engagement, lively conversation, $5,000 in gift cards raffled off to five lucky members, a live DJ, and some great afterparties. Most importantly, the convention accomplished its goal: Delegates adopted a powerful platform that serves as a roadmap for a bold path forward, poising SEIU 1021 to lead labor in an intersectional movement for equity, dignity, safety, rights, and justice.