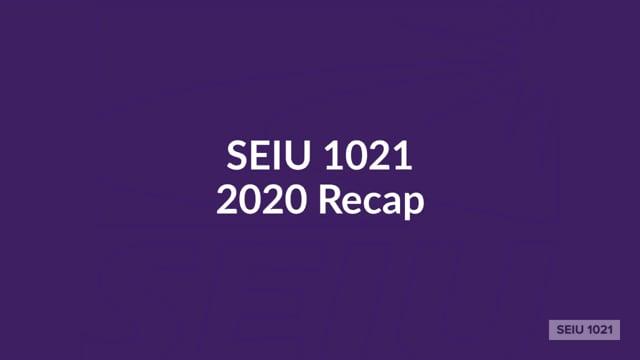 It’s no secret that 2020 was a challenging year for all of us. It was a year that often felt like it lasted a decade, making it easy to lose sight of the many obstacles we faced and overcame over the last 12 months. When it was all said and done, SEIU 1021 members had lots to be proud of.

Despite all of last year’s unforeseen difficulties, our union fought hard to protect the physical and economic health and wellbeing Northern California’s frontline workers. We took on a number of high-profile fights, secured strong protections, and added new benefits for workers during these difficult times.

2021 will bring countless more obstacles and challenges. We have strength in our numbers, however, and working together we can fight for the public services we need to guide us towards an equitable recovery from the COVID-19 pandemic and it’s effects.

The first step? Make sure you and all of your coworkers are signed up as members of our union. If you’re already a member, consider joining COPE (our Committee on Political Education), which means making a voluntary recurring donation to help fund our political work. Being a COPE member is a great way to have a voice in shaping our union’s political priorities and endorsements. You can do both by clicking here.

This recap represents only a small fraction of the work done by our union last year, but we’re proud to remember some of 2020’s biggest moments for our union.

In San Francisco, SEIU 1021 members took on a number of high-profile fights and came away with some solid victories despite a score of challenges.

Back in February, even before COVID-19 dramatically transformed our economy, the Mayor’s office already had their sights set on unnecessary cuts to city services and workers. We fought back by taking to the streets and rallying, sending hundreds of emails to elected leaders, having thousands sign our petition for a Budget for All, and more—and we won. We protected services, avoided layoffs, and retained the raises we need to make sure that both the physical and financial health of frontline workers were maintained.

Members also won strong COVID-19 protections and standards for workers, led a number of racial justice actions, and took on a fight over safe staffing in SF’s hospitals.

Members at the nonprofit Felton Institute/Family Service Agency also secured a strong new contract this year, providing 5% pay increases with retroactive pay and longevity recognition for workers with many years of service. We also secured a neutrality agreement to make it easier for other Felton/FSA workers to join our union and grow our strength at work and at the bargaining table.

In the November election, we successfully passed every revenue measure endorsed by our members. This new revenue will be essential for funding a just and equitable recovery from COVID-19 while continuing to fund the critical services we provide to San Francisco’s communities. We also elected a number of allies to a number of local offices, including the San Francisco Board of Supervisors and school boards. These allies will be an important part of campaigns to come, as we fight against future austerity and push for the funding our work requires.

You can read a more in-depth recap of the victories secured by SEIU 1021 members working for the City and County of San Francisco in 2020 here.

Across the East Bay, SEIU 1021 members tackled a number of issues and were able to prevent layoffs and concessions while protecting the services and jobs that our community depends on. We led a labor coalition that beat back furloughs and protected the jobs of workers who provide services for our community. We also created a comprehensive agreement that set the standard in the region, including improved leave policies with COVID leave banks, work incentives, and raised vacation caps in addition to enhanced and expanded telecommuting options. We also improved access to equipment, better PPE, and sanitizing procedures.

Our BART members reached a new three-year contract extension which included protection for workers against COVID-related layoffs and bases future wage increases on returning to pre-COVID ridership levels starting at 60%. Members at the City of Berkeley also ratified a new agreement, providing them with a number of important COVID-19 benefits and layoff protections.

This fall, over 3,000 workers at Alameda Health System went on strike over management’s unfair labor practices, chronic understaffing, and massive proposed takeaways. In the wake of this powerful strike, the AHS Board of Trustees was removed and their CEO resigned, leading to a new Board being sworn in which included SEIU members. Our fight at AHS continues.

Our nonprofit members also had a big year in the East Bay. Members at the Oakland Housing Authority ratified a new three-year deal with wage increases and equity adjustments. At La Familia, we secured an agreement that management would pay for workers’ healthcare during three months of the pandemic and members at Native American Health Center won bonuses for members who continued to work and put themselves at risk during COVID-19. At the Spanish Speaking Unity Council, members won additional paid holidays to better help workers weather the strain of COVID-19 and the depletion of their leave balances.

Politically, members worked hard to elect allies to important positions, including supporting Carroll Fife in her successful campaign for Oakland City Council, as well as helping secure the re-election of Councilmember Rebecca Kaplan. We also won Measure W in Alameda County, which will bring in $150 million annually for homeless services.

In Richmond, we helped secure a progressive majority in City Council with the elections of Gayle McLaughlin, Claudia Jimenez, and Melvin Willis. Our work was also instrumental in passing a gross receipts tax measure, which will bring more revenue into the city to fund our services.

We also organized a large march for racial justice, which brought thousands of people out into the streets for a powerful march from Rockridge BART to Sproul Plaza at UC Berkeley.

Members in the North Coast were busy this year, and our hard work paid off big.

Even despite COVID’s uncertainties, we secured new contracts at the Marin Municipal Water District and Community Action Partnership which both included wage increases. We united to successfully fight back against significant layoffs in Sonoma County. Members at Dominican University secured a grievance settlement totaling over $700,000. At the Sonoma Courts, our union stewards successfully pushed back against the CEO for adequate PPE once the shelter-in-place order began, and workers at the Community Action Marin Chapter had six new coworkers step up to become Stewards in our union.

Longtime 1021 member Tim Tuscany was elected to the Sonoma County Employees’ Retirement Association, giving members a voice in the administration of their retirement.

Politically, our members supported a number of successful candidates in races in our cities, counties, colleges, and water boards. We also played a role in passing several revenue measures that directly benefit our members, including Measure O in Sonoma County which will bring in an estimated $25 million per year for mental health, addiction, and homeless services.

One of the biggest fights our union had this year was the ongoing contract negotiations in San Joaquin County. Our members were up against a difficult employer who showed little interest in cooperation or finding common ground. Ultimately we had to escalate to drastic tactics such as blockading the County landfill and holding a two-day strike across multiple County worksites, including the hospital, near the onset of the COVID-19 pandemic. Our fight paid off; in October, members overwhelmingly ratified a new agreement after a difficult 19-month fight.

We were also proud to welcome workers at the Calaveras Public Utility District to our union and helped these workers secure their first contract as SEIU 1021 members in 2020.

Across the entire North Central region, we were able to fight off layoffs in every worksite they were proposed, which is a significant victory. This included the City of Napa, which proposed layoffs to over 20 of our members in the Parks and Recreation Department, claiming shortfalls in revenues necessitated the needs for the cuts. Our members fought back, showing up in force, rallying outside of City Council meetings and voicing their concerns during public comments. Not only did we prevent even a single layoff, but members are now looking forward to their scheduled pay raise in 2021.

Additionally, despite the uncertainty caused by the pandemic, SEIU 1021 members at the Mosquito Abatement District in Solano County, the Far Northern Regional Center, and North Bay Regional Center were also able to reach agreements that included wage increases which will help our members and their families weather this economic storm while remaining focused on serving their communities.

SEIU 1021 members working in our school districts successfully reached COVID-19 agreements across the board. Our agreements helped ensure adequate PPE, secured worker protection protocols, protected salaries for permanent and substitute workers (including winning a court battle for substitute workers’ pay at Fremont Unified), and added new pay and stipends for many workers on the frontlines of the pandemic. We also secured sick leave banks for many members who tested positive for the virus, irrespective of whether or not they previously received benefits. Notably, our education units avoided layoffs in 2020 as a result of our members’ hard work and diligence.

In higher education, our union has fought back to convince governance boards to keep institutions afloat at places like the San Francisco Art Institute and Notre Dame de Namur University. At the California College of the Arts, workers have waged a strong campaign, including taking the streets in Oakland, as part of an ongoing, nasty bargaining fight for a fair contract.

Members at Dominican University also secured a settlement totaling around $750,000 for members during recent negotiations. The settlement is split into two pots of money—the first was a severance package for adjuncts who have had their course load diminished or cut altogether.  The second portion of the settlement was to put to rest a grievance over unpaid breaks and lunches.