2020 was a difficult year, but SEIU 1021 members in San Francisco fought back—and we won

It’s no secret that 2020 has been a challenging year for all of us. In a year that has often felt like it’s lasted a decade, it’s easy to lose sight of the many obstacles we’ve faced and overcome over the last 12 months (and the last nine in particular).

That being said, despite all of this year’s unforeseen difficulties, our union fought hard to protect the physical and economic health and wellbeing of San Francisco’s frontline workers. We took on a number of high-profile fights, secured strong protections, and added new benefits for workers during these difficult times.

It’s always important to remember that none of these things were given to us by management out of the goodness of their hearts—we had to hold the line and fight for every single one of the things we accomplished in 2020. Without the strength of our union, management would have had the power to slash services, cut jobs, cancel raises and diminish our pay and benefits, plus so much more. That’s why it’s important that, if you haven’t already, you make sure that you sign up or renew your membership with SEIU 1021. A strong membership is the best defense against future austerity and cuts.

Click below to check out some recaps of our work this year: 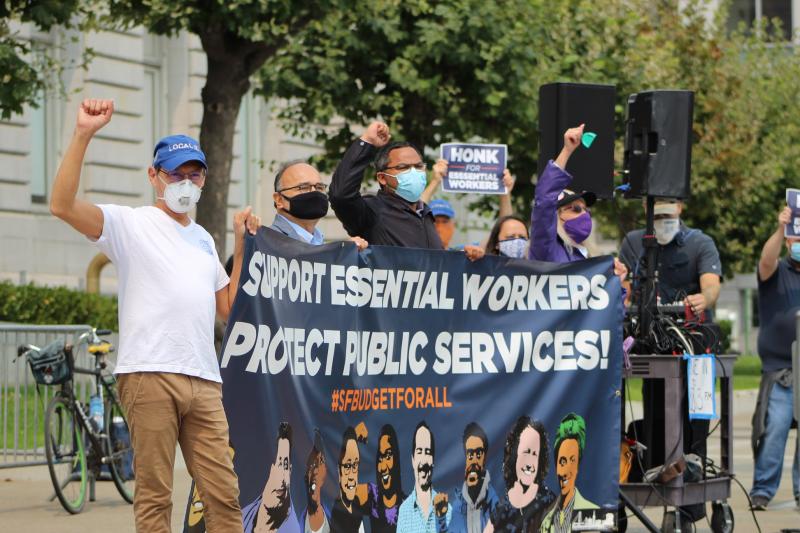 Back in February, even before COVID-19 dramatically transformed our economy, the Mayor’s office already had their sights set on unnecessary cuts to city services and workers.

SEIU 1021 members immediately began to plan and fight back, with the arrival of COVID-19 accelerating and escalating our fight.

Over the course of many months, we took a number of actions to protect services and our jobs. This included over 5,500 SF union members signing our petition demanding that the Mayor spend down the emergency reserves to protect jobs and services and support new revenue measures. Additionally, nearly 1,500 more workers sent emails to the Board of Supervisors asking them to stand with us and pass a budget for all. We organized car caravans and rallied outside of City Hall to make our voices heard. 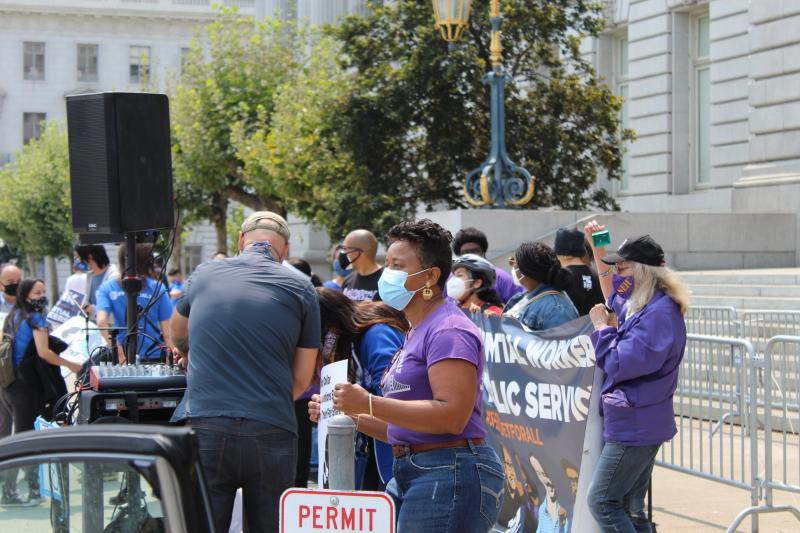 We fought—and we won. We protected services, avoided layoffs, and retained the raises we need to provide for ourselves and our loved ones. The full San Francisco Board of Supervisors voted to pass a budget that honors our contract, protects our raises, and prioritizes public services. Effective December 26, all members received a 3% wage increase.

After months of hearing from our members, Supervisor Matt Haney said, after the Board voted to pass the budget we fought for, “Our frontline workers, our city workers, our nurses, the people who are literally saving lives right now, it means so much that we are having their backs. They should not take a hit in this moment. We have a reserve. We have prepared for this. We have made commitments to them. We should honor those commitments.” 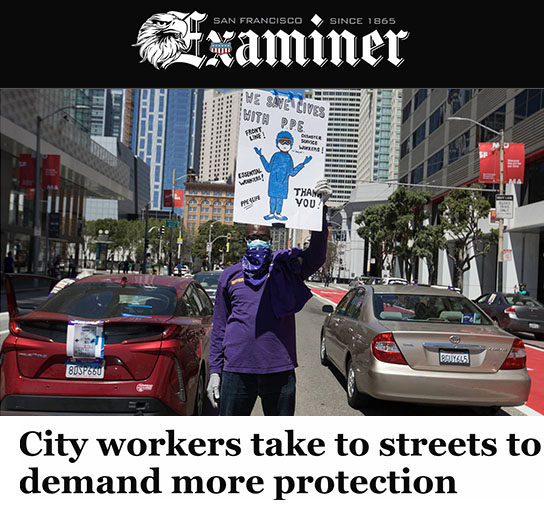 From the onset of this crisis, SEIU 1021 members in San Francisco jumped into action to ensure that the health, safety, and economic well-being of our members, families, and communities were protected.

In addition to our negotiations with management around new protocols, procedures, and benefits for frontline workers, we also took to the streets to demand safety and adequate PPE for members in a car caravan around Moscone Center (read about it in the SF Examiner). We fought to ensure that appropriate personal protective equipment was provided and available everywhere it is needed.

“We are caring for the sick, supporting San Francisco’s seniors, children and vulnerable populations, and helping people get where they need to go,” said Theresa Rutherford, VP of San Francisco, at our car caravan in April. “Adequate PPE keeps us safer. Universal testing is needed to figure out where the virus is, who is positive, and where it is going, who has fought it off, and whether the San Francisco residents are gaining immunity.”

“Essential front line workers are risking their lives, so we can live ours,” said SEIU 1021 President Joseph Bryant. ”Their mission is to stop this virus from spreading. We need to make sure they have the essential protections to beat this virus.”

By working together as a union, we won:

SEIU 1021 has a vision for a just society where all workers are valued and all people respected, no matter where we are from or the color of our skin. All families deserve to thrive in a more just and equitable society but until Black communities and other communities of color can thrive, none of us can truly thrive.

“As a union that unites 60,000 working people across race and other backgrounds and identities, we must continue to actively dismantle structural racism and fight for justice and dignity both in and out of the workplace. The racism that drives calling the police on a bird watcher, a child selling water or a group of people having a bar-b-que at the lake comes from the same racism that can lead to the egregious killings that we have witnessed over the past few weeks. Structural racism manifests itself in all facets and systems of the United States’ society; if we want to build a better and different future for all people, Black, Brown, API and White, it is the duty and responsibility of all Unions and Union members to tenaciously fight for racial and economic justice, as our fates are linked,” said SEIU 1021 President Joseph Bryant.

Our union is a committed anti-racist organization, and this year we took action to pursue our racial justice goals in a number of ways. 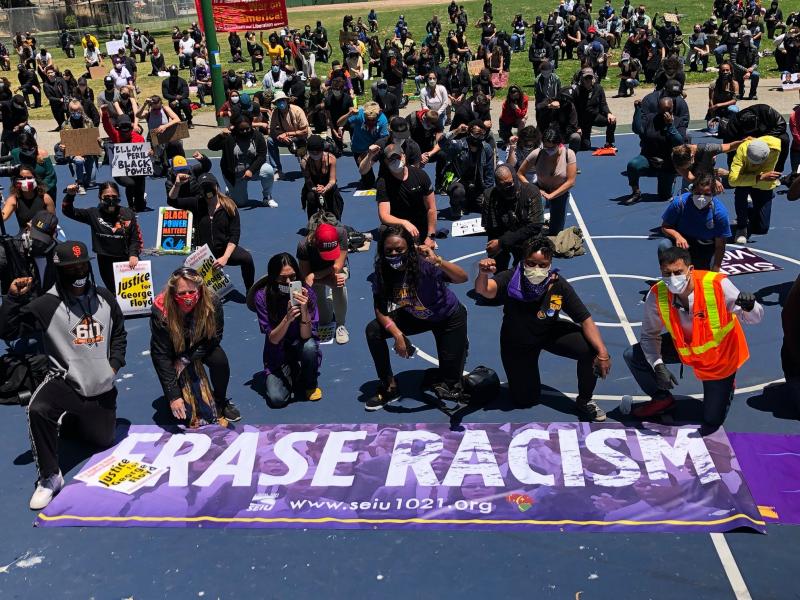 On Saturday, June 6 SEIU 1021 led a march with hundreds of people throughout the Bay Area in remembrance of George Floyd, Breonna Taylor, and others who have lost their lives to police brutality. We were joined by other unions, San Francisco elected officials, clergy, community groups, and residents as we converged at Candlestick Park, the former site of the San Francisco 49ers stadium where Colin Kaepernick first took a knee to protest police brutality and systematic racism.

We then marched through the Hunter’s Point neighborhood before speakers delivered passionate speeches addressing police accountability, systematic oppression, and Black liberation. Then, we all took a knee in silence for 8 minutes and 46 seconds while the names of lives lost to police brutality were read out loud.

On July 20, we rallied with thousands of union and community members as part of the nation-wide Strike for Black Lives (read about it in the Mercury News). We rallied outside City Hall and called for an end to state violence against Black people and demanding a robust investment in the public services that protect vulnerable communities and combat the effects of systemic racism. 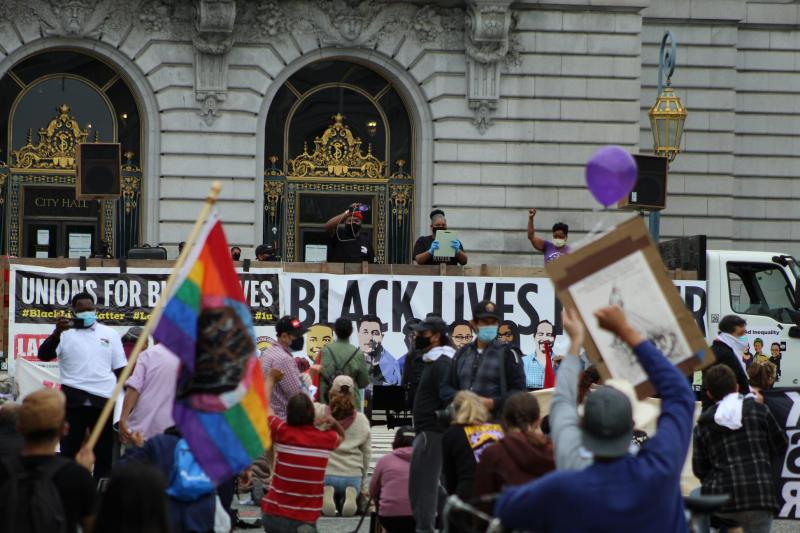 In addition to ending police violence against communities of color, we also understand that we must tackle the fundamental obstacles to our vision of a more just society, including structural racism, corporate power, widening inequality, and the defunding of public services. These obstacles are all intertwined, and they all disproportionately harm communities of color and other vulnerable populations.

“Brothers and sisters, we are fighting two pandemics: COVID and systemic racism. These two diseases impact the same demographics—Black, brown, and API people…we saw this with our own eyes with the deaths of George Floyd and Breonna Taylor. It’s time to hold the police accountable. They are civil servants who are supposed to protect the community, not murder them,” said SEIU 1021 VP of San Francisco Theresa Rutherford. “We demand that the police be treated like every citizen—when they are wrong, when they break the law, they must be held accountable.” 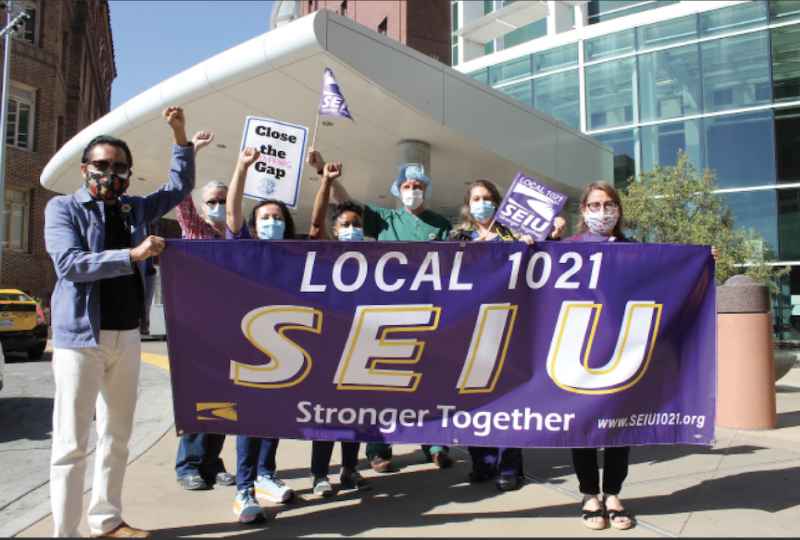 Back  in March, hundreds of public healthcare workers rallied at a press conference and testified at a hearing at SF City Hall calling for registered nurse vacancies to be filled across San Francisco. RNs, doctors, social workers urged the Board of Supervisors to boost staffing and provide safer working conditions at San Francisco Department of Public Health (DPH) facilities, especially in the face of the COVID-19 pandemic.

The impact was immediate.  The Board of Supervisors pressed DPH officials to resolve our issues as the threat of COVID-19 loomed, and the city committed to filling 100+ RN vacancies. Supervisor Ahsha Safaí called on public health administrators to speed up the hiring process to as short as 30 days.

“It’s about making sure that we have the resources, we have the training, we have that skill sets so comfortably ingrained that when you show up at the door, the focus is all about you,” said Heather Bollinger, ER nurse at SF General Hospital.

This year we also filed a lawsuit against the City & County of San Francisco’s Department of Public Health over violations of the federal Fair Labor Standards Act. In short, DPH is engaged in wage theft with respect to many of our dual status RNs.

We estimate that on average 90,000 hours of overtime have gone unpaid every year, and that DPH is using this wage theft to hide just how understaffed we are. We filed suit to correct these issues.

The solution to understaffing is not to have nurses working four or five twelve-hour shifts each week. That is dangerous for patients staff and it results in nurses burning out, leaving for other jobs, or retiring. DPH needs to hire an adequate number of nurses to meet the needs of our patients and they need to pay nurses fairly and adequately.

If you’re a dual status RN working for the Department of Public Health, you can learn more and opt in to our lawsuit by visiting seiu1021.org/lawsuit. 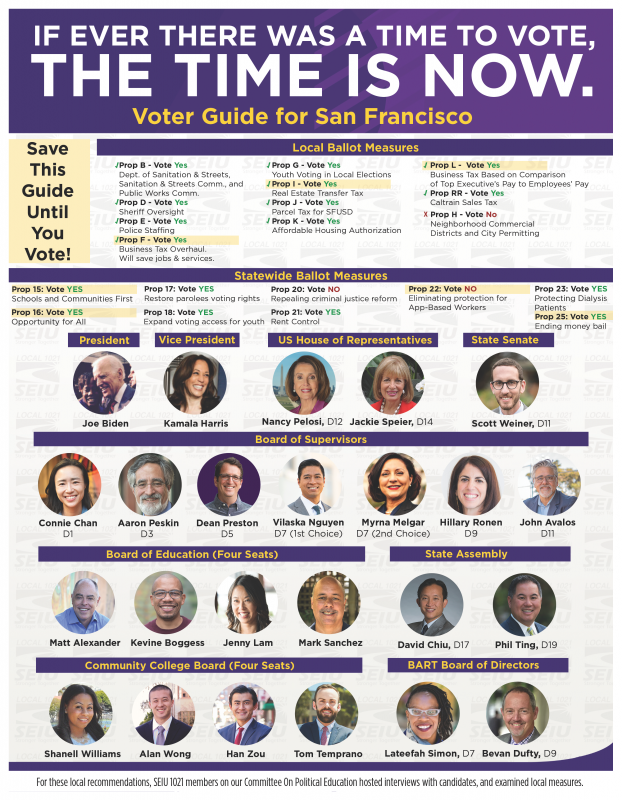 We knew coming into this election that in order to maintain funding for services and avoid layoffs, it would be critical to secure new revenue.

Over the several weeks and months leading up to the election, our members worked hard to make that happen. We made phone calls, sent text messages, and dropped literature on doorsteps all across San Francisco—and our efforts paid off.

Every SF revenue measure our members supported and worked to get out the vote for this year passed, many of which were badly needed to protect services and jobs.

These revenue measures will bring in hundreds of millions of dollars every year. This is a huge victory for our communities and the services we all work hard to provide for San Franciscans—and this victory would not have happened without the hard work and support of union members across our city.

To avoid cuts to services and layoffs for city workers, the budget adopted by the Board of Supervisors this year depended heavily on passing Proposition F, which passed overwhelmingly with 67.48% support.

Also critical to future budgets and upcoming negotiations was Proposition L, called the Overpaid Executive Tax, which was overwhelming approved with 65.06% support.

We also elected allies to the Board of Supervisors like Connie Chan, Aaron Peskin, Dean Preston, Myrna Melgar, and Hillary Ronen. All of these elected officials will be essential to the success of ongoing budget negotiations, as we fight to fully-fund our services, which will be crucial to San Francisco’s recovery from COVID-19.

Here’s how we did on a number of other propositions our members weighed in on this year: