Sonoma County Chapter President Jana Blunt Is Kicking A$$ for the Working Class Now She’ll Have an Award That Says So. 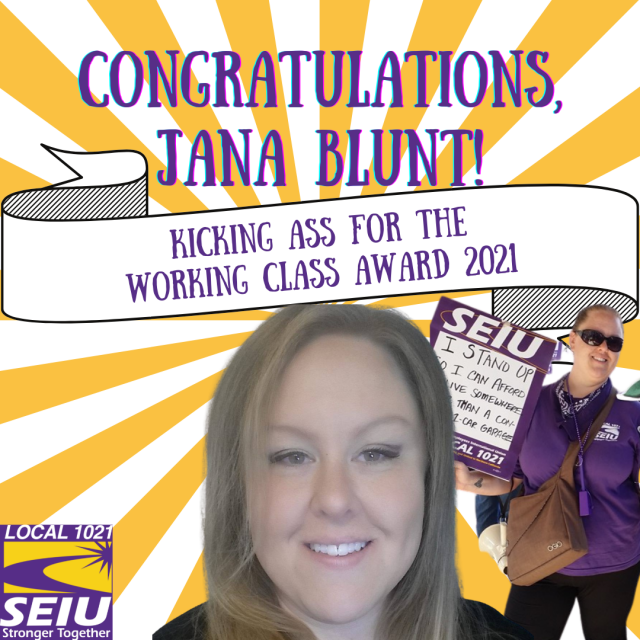 Folks who know SEIU 1021 Sonoma County Chapter President Jana Blunt and are familiar with her work with the union agree: She is an amazing leader who gets s*%t done. Her fierce, persistent, and creative organizing and advocacy was crucial in successfully saving 45+ County workers’ jobs in less than a year and, most recently, winning hazard pay for all County employees for their work and sacrifice throughout the pandemic. And she is still fighting hard for an equitable countywide telework policy.

So it should come as no shocker that she was nominated for–and won–the prestigious David Grabill Kicking Ass for the Working Class Award this year from the North Bay Labor Council (NBLC).

“Jana is really something special,” said NBLC Political Director Maddy Hirshfield. “She has really dug in her heels throughout this pandemic to make sure everyone had what they needed. She’s been a real hero.”

Like many great union leaders, it was first hand experience with what can happen in a nonunion workplace that pushed Jana into activism. “The last unrepresented job I ever had was at a nonprofit that had extremely abusive management,” Jana explained. ”Wage theft was rampant–mandatory unpaid overtime–and emotional blackmail was rampant. Police had to be called on the CEO for a physical altercation and even drug abuse. This was a highly esteemed organization. It broke me. I finally came to the point where I realized, ‘If I don’t get out of here, I’m part of it.’ I finally got up in the middle of a meeting and walked out. And then I realized I had just completely lost who I was. It was like boot camp, where they break you down and rebuild you. I ended up having to take the place to the Labor Board for unpaid wages for myself and others I worked with. It took over three years–I was well into my job at the County when it came to fruition. But we got everything we demanded–and it was so life-affirming to get away and take them to task. I think that’s what spurred me.”

After quitting the hostile workplace at the nonprofit, Jana was determined not to take another nonunion job, applying for dozens of positions with the County before landing a position at the county clerk’s office. Within a year, they were on strike–and Jana was a strike captain. “That was fun,” she recalled. “That led to becoming a steward, then the chapter secretary, then the chapter vice president.” She became chapter president unexpectedly when her predecessor was laid off due to bad funding choices at the County–and a month later, COVID-19 hit.

The pandemic was an early test–one Jana has passed with flying colors. “For the first year [I was in office], our days were spent meeting and conferring with county management over insufficient safety measures. During nights and weekends, we spent time doing weekly YouTube updates for the workforce,” she explained. “Last fall, the county came to us with pandemic-related budget cuts and placed over 30 jobs on the chopping block. I was able to lead membership through this strenuous messaging campaign and worked with district supervisors to locate usable funds. We were able to save all those jobs. This spring, we came into the same problem–14 jobs on the chopping block but we were able to save them again.”

Jana will receive her well-deserved David Grabill Kicking Ass for the Working Class Award at the NBLC COPE Dinner this Friday, Dec. 17, where SEIU 1021 President Joseph Bryant will be a featured speaker. But she is far from done kicking ass for the working class.

In addition to continuing to push the County to adopt an equitable telework policy–through meetings with the Board of Supervisors, “we’ve gotten movement, but we’re coming back just as strong”–Jana is also leading an effort to launch a medical funds trust for retirees. And in the long term, she’s concerned about protecting public employee pensions, which are under constant attack from corporate interests and the organizations they fund.

“There’s so much misunderstanding,” she said. “We take a pay cut in the short term to be able to retire in the long term. Instead of people saying, ‘How can I get this for myself?,’ too often they say, ‘I don’t have this, so you shouldn’t either.’ What if we got this for everyone? Unions for all!”

Congratulations, Jana and the entire SEIU 1021 Sonoma County Chapter! Your win is a win for all of us!