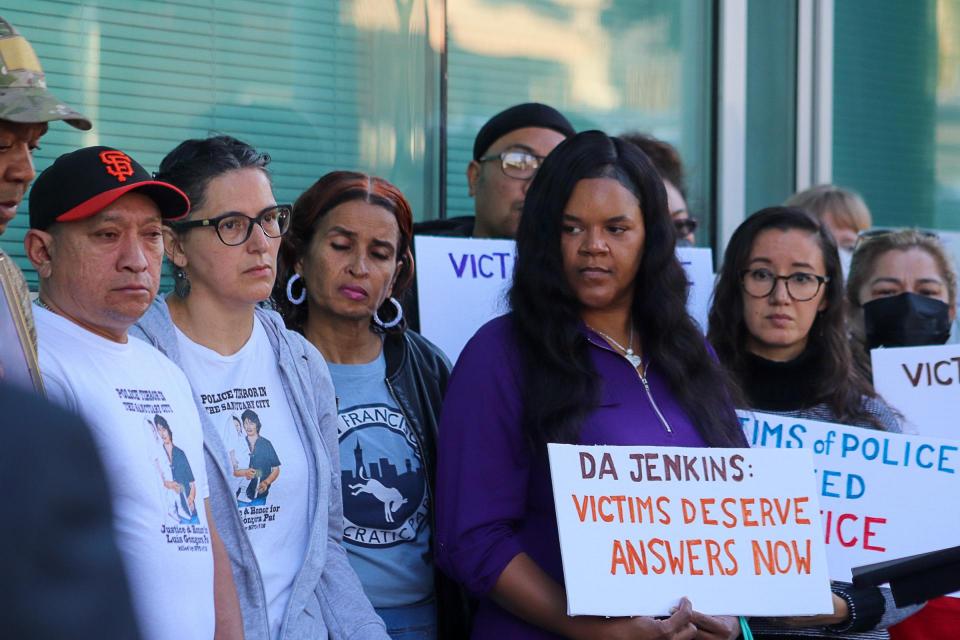 On Thursday, October 20th at 10 am, SEIU 1021 members joined the families of police shooting victims Keita O’Neil, Sean Moore, and Luis Gongora Pat at a press conference and rally outside District Attorney Brooke Jenkin’s office. The families of the three victims urged Jenkins to commit to prosecuting the officers, citing civil lawsuits and settlements awarded to the families, as well as independent investigations and disciplinary actions.

“It is unacceptable that this interim district attorney is delaying justice for these families. Justice delayed is justice denied. We will not let this go. We will stand with these families every step of the way to make sure they get justice,” said Nicole Christian, Social and Economic Justice Committee Chair of SEIU 1021.

Attendees demanded that interim DA Jenkins follow through with the prosecution of the SFPD officers who murdered O’Neil, Moore, and Gongora Pat. Advocates and families alike said these cases offer a preview of how DA Jenkins will approach future police shootings and excessive use of force cases.

“The officer who killed Keita O’Neil was fired from the San Francisco Police Department. All three families have won civil lawsuits over these cases. Even the police department and city believes these officers did something wrong. So why isn’t the district attorney working with complete urgency to hold them accountable?” asked James Burch, an activist leader with the Anti Police-Terror Project.

In 2016, SFPD officers Michael Mellone and Nate Steger shot and killed Gongora Pat, an immigrant worker who was unhoused at the time, in the Mission neighborhood. Witnesses say Mr. Góngora was just sitting alone on the ground, minding his own business, when he was attacked by officers with a bean bag rifle and firearm rounds. The Department of Police Accountability, an SFPD oversight agency, found the officers breached SFPD time and distance policies in his killing. The Independent Investigations Bureau under D.A. Chesa Boudin was preparing to file charges when his term in office ended.

In 2017, rookie cop Chris Samayoa shot and killed the unarmed O’Neil. A few months after the shooting Samayoa was fired by SFPD. In November 2020, DA Jenkin’s predecessor, former District Attorney Chesa Boudin, filed felony criminal charges against Samayoa for voluntary and involuntary manslaughter, excessive force, and assault with a firearm.  But when DA Jenkins took office, she demoted the attorney working on the case and delayed the hearing against Samayoa until November.

In 2017, Officer Kenneth Cha shot Moore who was unarmed and standing in the entryway of his home. Moore subsequently died of health complications due to his gunshot wounds in 2020. Former DA Boudin also brought charges against the officer who killed Moore in 2021. That same year, the victim’s family reached a settlement in a civil lawsuit with the City of San Francisco.

“My son was diagnosed with a mental illness. He didn’t deserve to die. Police officer Kenneth Cha should be held accountable, but DA Jenkins has given us zero information about his case. I hope that District Attorney Jenkins will serve justice,” said Cleo Moore, mother of Sean Moore.

“We have deep concerns with how DA Jenkins has treated the families of these victims and with the direction she is taking their cases. These families deserve swift and timely action to hold the officers who killed their loved ones accountable,” said Abdi Soltani, Executive Director, the American Civil Liberties Union of Northern California

You can see a full recording of the press conference by clicking here. You can also read more from the San Francisco Standard.