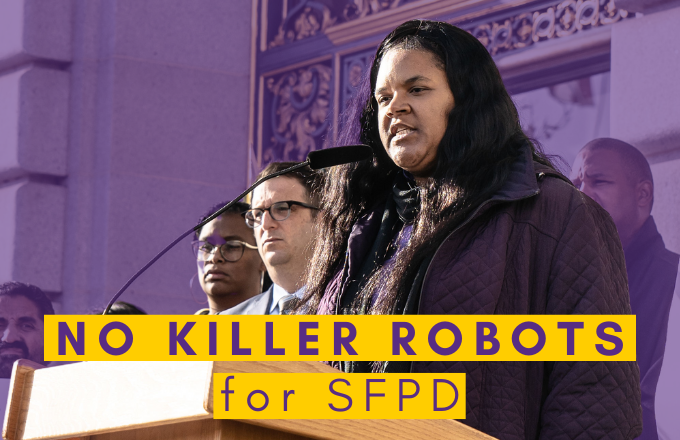 Several weeks ago, the San Francisco Board of Supervisors voted to authorize the San Francisco Police Department to deploy remote-control robots that were capable of using deadly force against residents. SEIU 1021 activists, along with racial justice groups, civil rights and civil liberties organizations, LGBTQ organizations, and other unions, jumped into action to oppose this dangerous and scary policy.

The policy passed with a vote of 8-to-3 at the end of November, sparking public outcry from around the world and here at home. Supervisors Walton, Ronen, and Preston were the initial votes opposed to this policy. Knowing that giving SFPD authorization to deploy killer robots would require a second follow-up vote before it could become official, activists immediately jumped into action.

People began a letter-writing campaign, asking folks to email the Board of Supervisors and reverse their vote on the killer robots policy. Community groups organized a huge rally and protest outside of City Hall on the day of the second vote. Nicole Christian, Chair of SEIU 1021’s Social and Economic Justice (SEJ) Committee, attended and spoke out at the rally.

Afterward, when the Board reconvened to vote on the issue a second time, it was clear that we had made our voices heard. When the item came up for its second and final vote, enough supervisors had changed their votes that it was defeated 8-3 in a significant reversal from the first vote. We thank Supervisors Mar, Chan, Melgar, Peskin, and Safai for changing their votes and of course are grateful to Supervisors Walton, Ronen, and Preston for opposing this dangerous policy from day one.

“Giving killer robots to SFPD was a terrifying and dystopian proposal from the beginning, and I’m glad that a majority of our Board of Supervisors voted this idea down. The proposal put city residents, workers, and visitors in danger. Between 2013 and 2021, Black people in San Francisco were 9.7 times more likely by population to be killed by SFPD as a white person and Latinx people were 4.3 times as likely. There’s no reason to believe that these already-unacceptable trends wouldn’t continue with weaponized robots capable of deploying deadly force. Defeating this proposal keeps all of us safer,” said Nicole Christian, Chair of SEIU 1021’s Social and Economic Justice Committee.

We thank all of the groups who signed onto this letter, and the many groups and residents who attended the Stop Killer Robots rally outside of city hall—this victory would not have been possible without you.