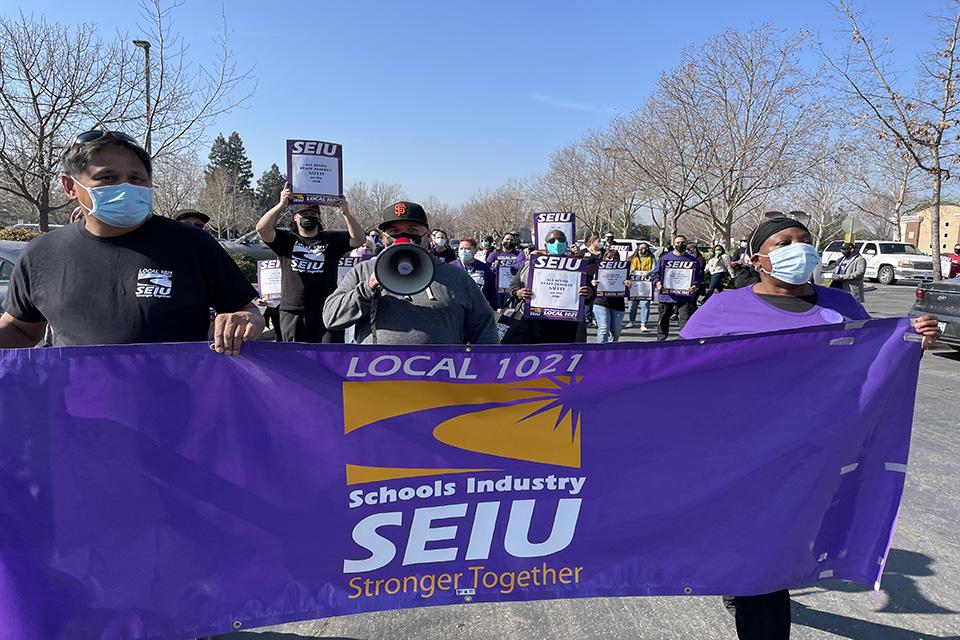 District employees are frustrated over inadequate staffing and a lack of support for students, despite unprecedented levels of state and federal funding and the district running record surpluses.

Every day 3,000 Sac City students go without a substitute teacher and 571 students who are waiting to be enrolled in independent studies get no instruction at all.

NOTE to editors and reporters: At 7:30 pm this evening, SCTA and SEIU 1021 will announce via Zoom the results of the strike authorization vote. Members of the media can receive the Zoom link by emailing jennie.smith-camejo@seiu1021.org. Results of the vote also will be posted on the SCTA website at: www.sacteachers.org

SACRAMENTO – Today, the Sacramento City Teachers Association representing 2,800 certificated staff along with Service Employees International Union Local 1021 representing 2,100 classified staff will announce results of separate votes by SCTA and SEIU members on whether to authorize a strike. If authorized, the union’s leaders can call a strike if the Sacramento City Unified School District continues to negotiate in bad faith on key issues related to staffing, the quality of instruction, and health and safety protocols. Just today, CalOSHA issued a citation against the district for pushing staff who had tested positive for covid or who were experiencing covid symptoms to continue reporting to work, cutting janitorial services when the need for sanitation is greater than ever, and other failures that have resulted in students, staff, and their families being needlessly exposed to covid.

Since the return to classes from winter break on January 3, on an average day, 3,000 Sac City students have gone without even a substitute teacher. On some school days, the number has spiked to nearly 5,000 students. For example, At John F. Kennedy High School, on multiple occasions, students from as many as13 different classes have been crowded into a school auditorium due to a lack of substitutes. Perhaps most egregious, district administrators have completely neglected 571 students from across the district who are unable to attend school in-person and have gone without any instruction this school year due to a lack of independent study teachers.

The staffing crisis also extends to other school employees. There are currently over 400 vacancies among classified staff, yet instead of trying to fill those positions, district management is pursuing layoffs of classified staff. “Students need instructional aides in the classroom. They need bus drivers and campus monitors, office managers, and nutritional service workers,” said Karla Faucett, a professional development specialist with 18 years in the district, who serves as the SCUSD chapter president of SEIU Local 1021. “We’re prepared to strike to ensure that all Sac City students receive the education they deserve.”

Sacramento is an outlier. Despite the additional funds and skyrocketing inflation, Aguilar has demanded a five-year wage freeze for certificated staff and a $10,000 cut in the average educator’s annual take-home pay of $10,000 through cuts to health benefits targeting SCUSD employees with families.

The proposals on the bargaining table are only the latest in a history of poor management decisions by Aguilar directly tied to the staffing crisis. Prior to the pandemic, the district sent layoff notices to hundreds of educators, only to rescind the layoffs–but many educators chose not to return. During the early days of the pandemic, Aguilar refused to pay substitutes or to use them to assist with virtual instruction, despite receiving state funds to compensate these school employees. Many of those unpaid substitutes then went to other districts. Making the Sac City staffing crisis worse is a national shortage of certified teachers. It’s predicted that SCUSD will see a wave of teacher resignations and retirements at the end of this school year.

Yesterday, Aguilar sent to district employees and the school community an inflammatory and misleading email that contained blatant sins of omission and false claims about the status of negotiations and proposed compensation for substitutes and nurses, among other issues. The superintendent failed to mention in his correspondence that SCTA had reached agreements with the district on increased compensation for both nurses and substitutes, but the district has chosen not to institute them. Aguilar’s email would lead one to believe that the independent study failure could be solved with teachers simply volunteering to take on extra work. It can’t. Recently, the district backtracked from its vaccination mandate for students due to its inability to staff independent study. The students who have been waiting since September have already overwhelmed the understaffed program.

“Mr. Aguilar’s correspondences are filled with misinformation and disinformation and are designed to foment tension rather than unite our community in this time of great need,” said Nikki Milevsky, SCTA’s vice president and a school psychologist. “The simple facts are: He created the staffing crisis through his policies. A Band-Aid approach won’t fix it. And bashing Sac City educators won’t attract new teachers to the district or help retain current staff.”