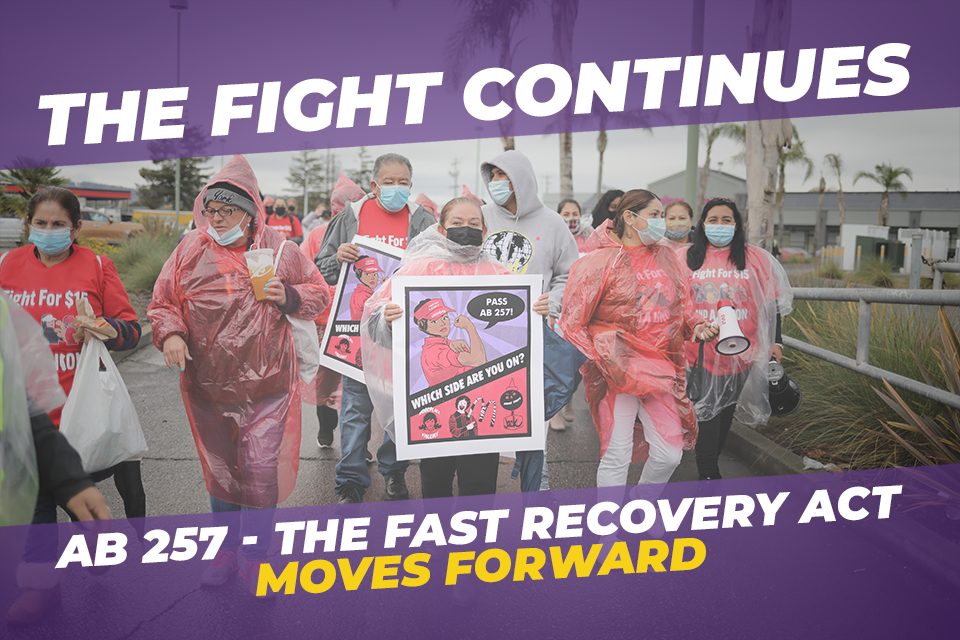 Coming off of last week’s worker-led legislative victory with the California State Assembly passing AB 257 – the Fast Food Accountability and Standards Recovery Act or FAST Recovery Act - fast-food workers are ready to take the fight for workplace justice to the State Senate.

AB 257 – the FAST Recovery Act would become a game-changer for an estimated five-hundred-seven thousand workers if enacted into law. Most fast-food workers are people of color and women who earn a median annual wage of just under $26,000, and two-thirds say their families rely on social safety net programs. On top of low wages, workplace conditions are incredibly rough. Sexual harassment, working in severe heat, and encountering workplace violence have afflicted fast-food workers. The COVID-19 pandemic has further heightened the nature of fast-food workplaces.

Imelda Rosales, McDonald’s worker and a member of the Fight for $15 and a Union movement, spoke about how the FAST Recovery Act will change workers’ material conditions, “It’s going to be a lot easier to have a voice at the table and make changes, that way they’re not going to have to continue with the same strategy of having to do strikes. The corporations should’ve been responsible for what’s happening in the franchises, to begin with. Now, we have to pass the State Senate, then for the governor to sign. That won’t be easy. It took us one and a half years to get this far and strike at over three hundred locations. We’re going to need every worker in stores across California.”

One of the significant parts of the FAST Recovery Act is the creation of a Fast Food Sector Council. This new statewide regulatory body would meet every three years to negotiate and recommend industry-wide minimum standards concerning pay and working conditions like safety and training. In a huge step forward for workers, the creation of this body would guarantee our state’s more than half-million foodservice workers the ability to negotiate with franchise owners and corporations for better wages and workplace standards.

The statewide regulatory body would be made up of eleven appointed members by the governor, the speaker of the Assembly, and the Senate Rules Committee. The body would include representatives of the state public health, occupational safety and health, labor standards, industrial relations regulatory agencies, and six members representing franchisers, franchisees, and employees.