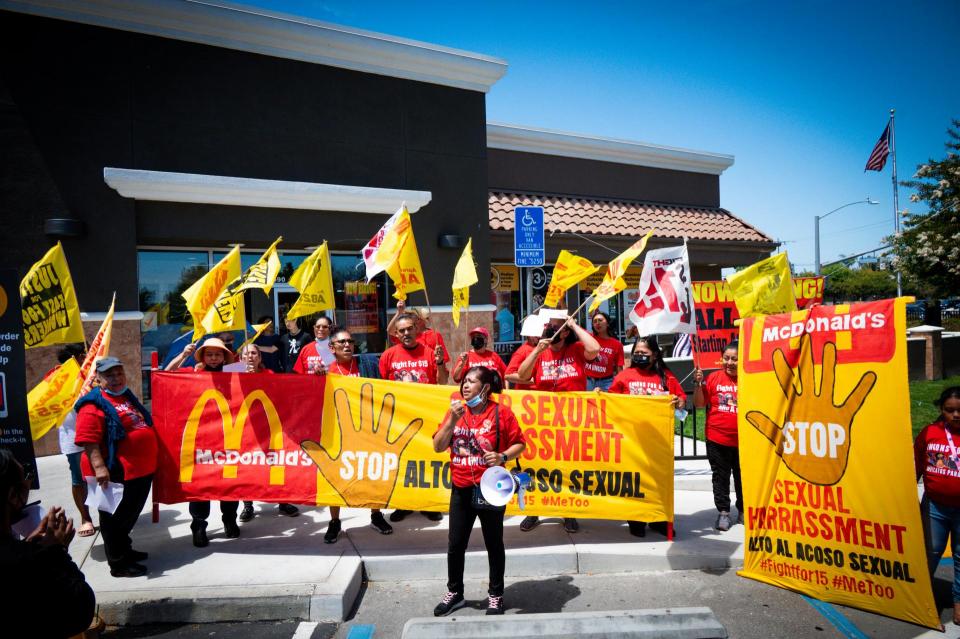 During the summer of action in the fight for a “fast recovery” for the fast-food industry, workers took action at a Saratoga McDonald’s. A former employee at the Saratoga McDonald’s filed a discrimination complaint against McDonald’s Friday, alleging sexual harassment and wrongful termination. Around thirty members of the Fight for 15 and Union movement held a rally on Thursday, August 4, 2022. The group marched through the store with signs that read “Stop Sexual Harassment.”

The fight at the Saratoga McDonald’s is part of a more extensive campaign to win Associations Bill 257 – the Fast Food Accountability and Standards Recovery Act or FAST Recovery Act. “McDonald’s leaders, we need safe workplaces free of intimidation from higher ranking staff,” said Pagaza. “California state senators: Support healthy workplaces. I’m asking you to support AB 257, so we can have a say in making sure that companies like McDonald’s take sexual harassment seriously and set better policies and trainings to prevent it from happening to others.”

Fast-food workers across California are speaking out against sexual harassment and other systemic issues in the industry in support of AB 257 – the FAST Recovery Act. The measure would create a statewide fast-food sector council that would include fast-food workers, government officials, and industry representatives to set minimum health, safety, and employment standards across California for the over half-million people working in the industry.

“We need changes like AB 257, where we could make sure workers get effective training on sexual harassment because right now, a lot of people don’t even have a clue what it is,” said Rosalia S.H., another McDonald’s employee. “This is why we need a voice to hold these companies accountable when they are not following the rules- which we’ll get with AB 257. We are here today because we need change in this store and in the entire fast-food industry. We will continue to fight to ensure that we have a voice in our work so that we can improve conditions and win justice.”

AB 257 – the FAST Recovery Act aims to give workers and franchisees a seat at the table to help shape sector-wide workplace standards to hold corporate franchisors accountable.

The bill is scheduled to be heard on August 11 in the California State Senate Standing Committee on Appropriations before heading to a full Senate vote later in the month.