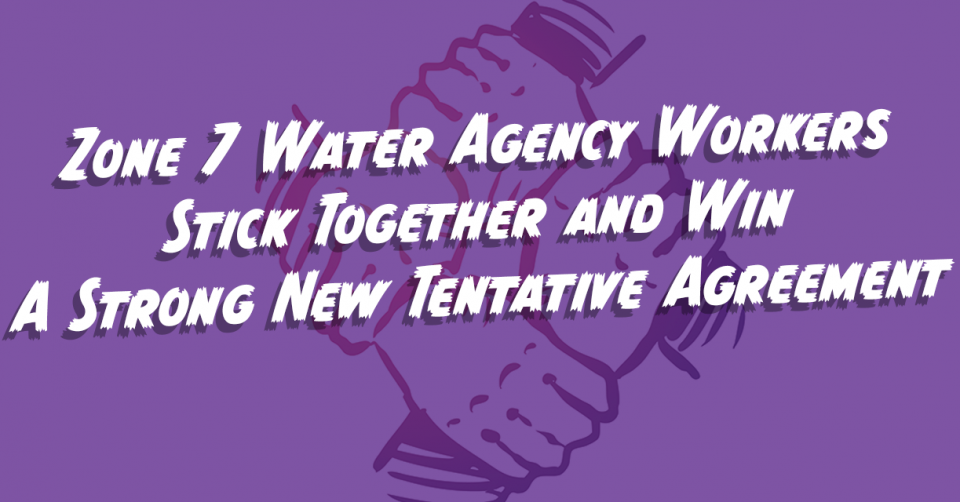 Workers at the Zone 7 Water Agency are responsible for providing flood protection and safe drinking water for the Livermore-Amador Valley. Recently, their bargaining team, including Tom Hempill, Alfonso Espinoza, and Mike Garguilo, went through wage negotiations with management, securing a three-year deal, with Cost of Living Adjustments (COLAs) of 6% in the first year, 5% in the second, and 4% in the third. They also proposed doubling the boot allowance to $400 for a number of classifications, but that is still pending a closed session of the Board on June 15. Next, the Zone 7 workers will have an opportunity to vote to accept the tentative agreement on June 8, 2022.

Alfonso Espinoza has been a water treatment operator at the Del Valle plant for the past three and a half years, and recently became a union steward. This was his first time on a bargaining team, and he said, “I’ve heard horror stories about negotiations, but this wasn’t like that. Their negotiators were coöperative, and we felt respected at the table, like they were willing to listen to us.”

Away from the table, the bargaining team met with the Board of Directors of Zone 7 to explain their needs and their priorities, and showed up to a board meeting to speak about the economic hardships they are facing, with sky-high inflation and off-the-charts gas prices. Espinoza said, “I think the deal is great. You always wish you had more, but their offer was a good one, and it means a lot to have that security now.”

His advice for other union members is to, “Trust the process. Bargaining might be difficult sometimes, and you might not feel like you’re seeing the progress that you want, but stay involved and keep asking questions whenever the opportunity arises. You can’t give up halfway though your journey! Stick together in your union and you’ll get where you’re going.”