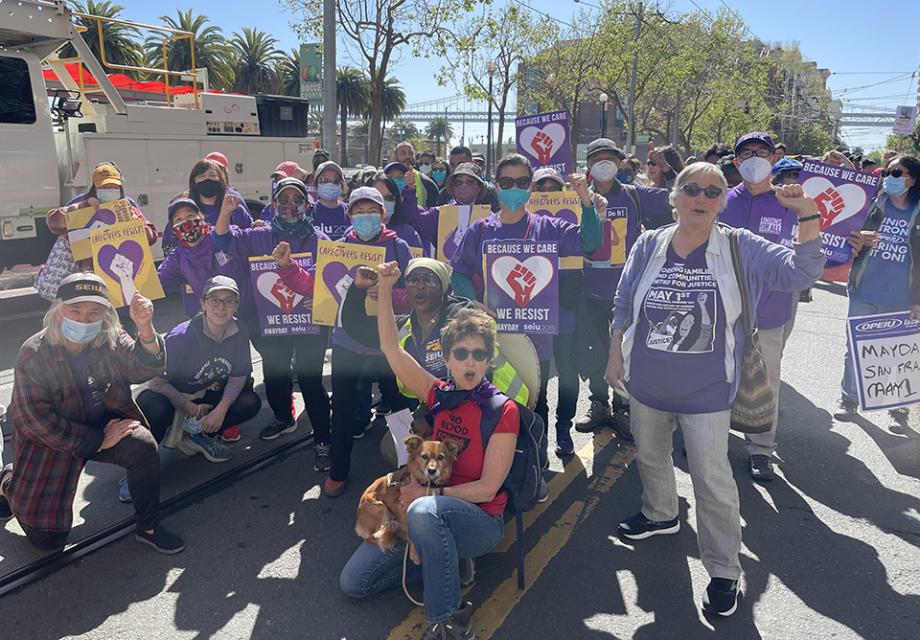 On Sunday May 1, thousands of workers from around the Bay Area marched down Market Street from Embarcadero to San Francisco’s Civic Center to commemorate International Workers’ Day in a recreation of the famous 1934 May Day March. The march, which was sponsored by several Bay Area labor councils, concluded with a rally at City Hall.

Celebrations of International Workers’ Day, also called May Day (and, in most other countries, Labor Day), date back over 100 years to the fight for an eight-hour workday. In San Francisco, May 1 has also played host to a rich history of collective action by workers.

This year’s march was full of profound meaning on the heels of two years of COVID and how its effects have highlighted the racial and economic disparities, amplifying pre-existing income inequality and racial injustice. At the rally, participants heard from speakers including famous political activist, scholar, and former Black Panther Party member Angela Davis, who impressed upon the crowd the importance of voting no on the recall of San Francisco District Attorney Chesa Boudin.

“All workers need to come out and mobilize,” said Sheleka Carter, community health outreach worker at Highland Hospital and AHS chapter vice president. “We are standing on the shoulders of people who have fought for us in this movement for workers’ rights. It’s important that we come out and demonstrate our strength and our numbers to show we are the workers, and we are important.” 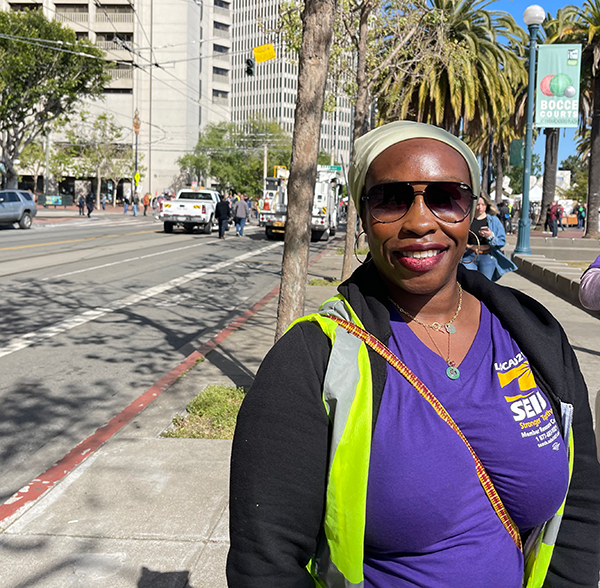 Shaleka knows firsthand workers and the communities we serve win big through our strength in numbers. In October 2020, she went on strike alongside thousands of her coworkers with Alameda Health Systems hospitals. They won a historic contract, forced the CEO to resign, and changed the face of the Alameda County’s healthcare governing board to improve patient care system-wide.

Cynthia Landry, who works for Alameda County Social Services and is an executive board member, was also part of the march. “This is our day for workers to join in solidarity with all workers internationally and locally. Workers are the foundation of the workplace. As I march down Market Street, I’ll be thinking that we need to do more to protect workers from harassment by the boss–all types of harassment. Whether it’s bullying, workplace discrimination, or singling out workers for the wrong motives. We must join forces.” 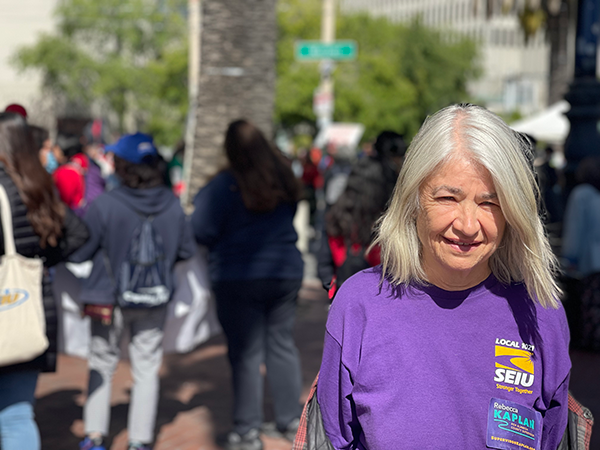 Martha Hawthorne, SEIU 1021 West Bay Retiree Chapter leader and former San Francisco RN, wore her May Day message on her shirt: No Blood for Oil. “I’m out here because May 1 is Workers’ Day. In the face of militarism only escalating and fueling the climate crisis, we must come out for the survival of workers. We have to care about it because we have a very small window to turn this energy economy around. It can be done if we listen to our members and scientists. We have to manage the phaseout of fossil fuels and war. If we don’t put those two things together, we are going to lose the human species.” 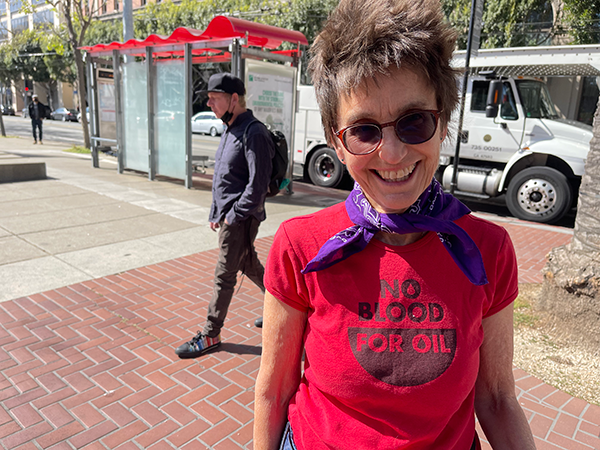 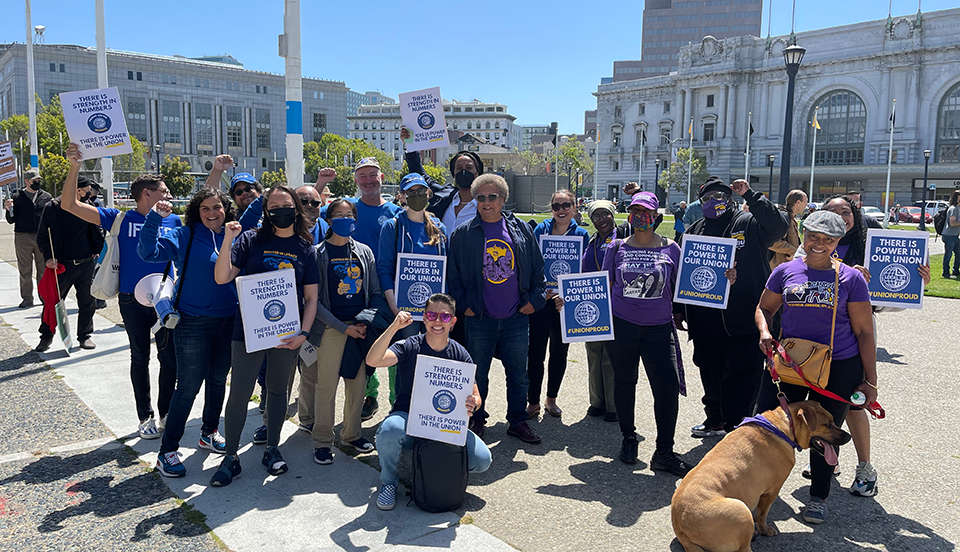 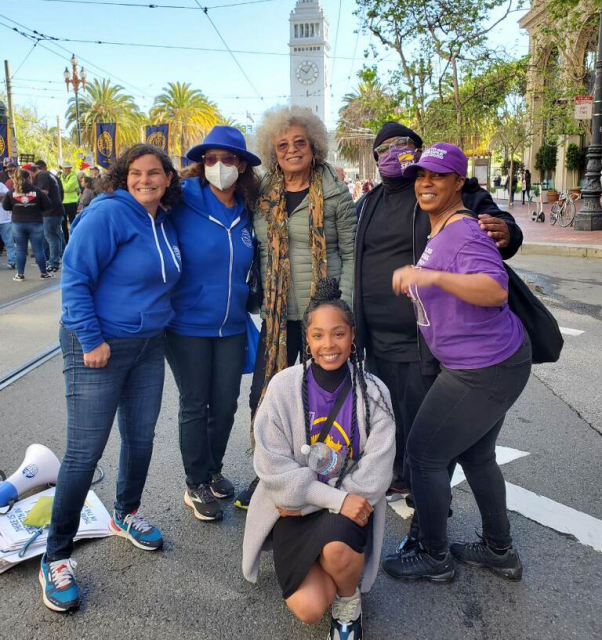