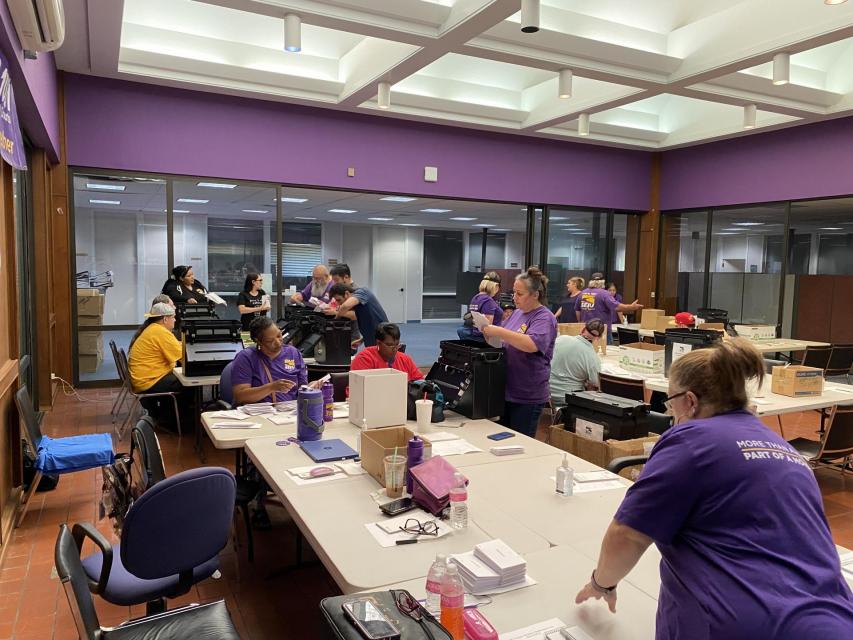 The contract was ratified, with ninety-seven percent voting in favor of ratification.

“What we did was a team effort,” said Taffie Walter, the president of the SEIU Local 1021 San Joaquin County chapter and vice president for Region E (San Joaquin, Calaveras, and Amador counties) on the SEIU 1021 Executive Board. “We made significant wins through collective unity between rank-and-file members, the bargaining team, the contract action team, and chapter leadership. Our first cost-of-living-adjustment raise will be six percent. Then, we will a five percent next July. That means we will receive an eleven percent increase within the first nine months of our new contract. Following that, we will get a four percent increase and then a three percent increase. That is an eighteen percent increase over the life of our four-year contract. That’s more than we have ever received.”

“I’m really proud of the bargaining team overall,” said Monique Baca, secretary of the SEIU Local 1021 San Joaquin County chapter and Budget and Finance Committee member for Region E (San Joaquin, Calaveras, and Amador counties) on the SEIU 1021 Executive Board. “We came together, we listened, we took all of our concerns from our individual departments, and we fought to mold the best possible outcome for everyone involved.”

Make no mistake: The new 2022 to 2026 contract for SEIU Local 1021 San Joaquin County members is the union difference. The chapter is coming out of the latest contract negotiations more robust and stronger together.