SEIU 1021 Shows Up to Support Sheng Thao for Oakland Mayor 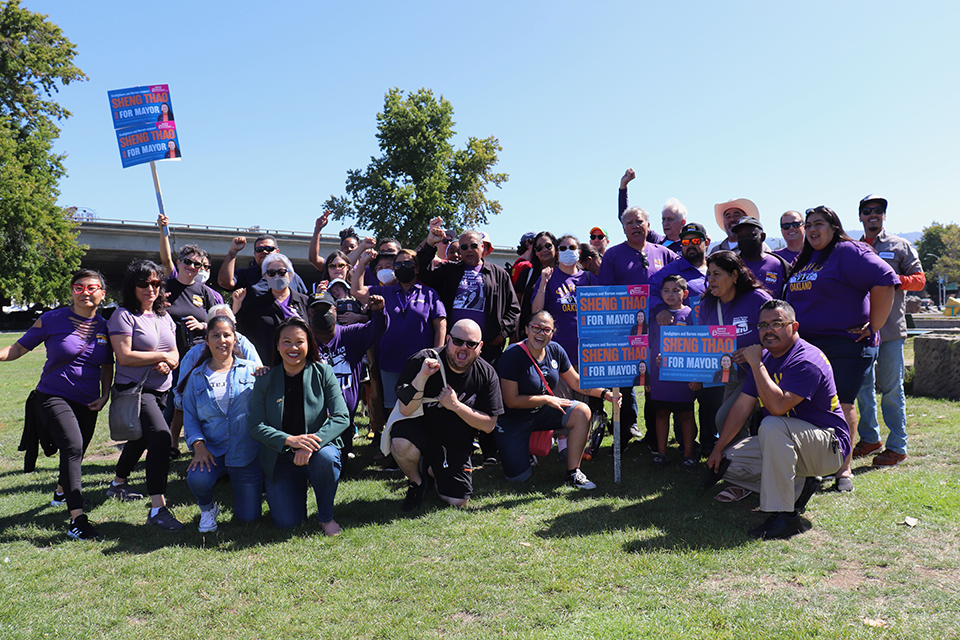 Oakland is at a political crossroads, with long-time mayor Libby Schaaf not eligible to run again after serving two terms, and three City Council seats up for election in Districts 2, 4 and 6. District 4’s current representative Sheng Thao is running for Mayor, and she kicked off her campaign on Saturday with plenty of support from SEIU 1021.

City of Oakland chapter president Felipe Cuevas said, “I’ve known Sheng for years, going back to her time on Rebecca Kaplan’s staff. She has always made the effort to reach out to us, and, as a former City worker herself, she understands our issues well. She has advocated for us on City Council and showed up to support us on our picket lines.” He called for everyone who lives and works in Oakland to support Sheng Thao: “This race is vitally important for us as City workers and union members. Getting a pro-worker Mayor into office will give workers a greater voice in the policies and priorities of Oakland.” 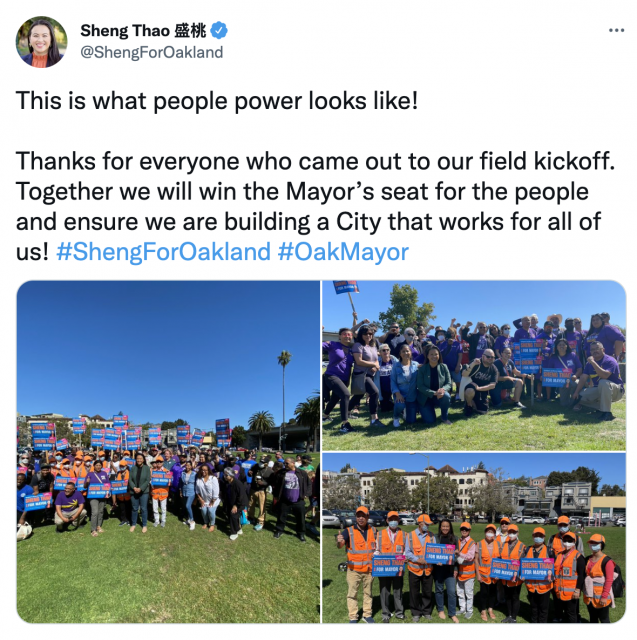 Thao has served on City Council since 2018, when she became the first Hmong American councilwoman in California. She’s the daughter of an immigrant family, and has experienced homelessness and been a single mother, experiences which have helped give her a deep understanding of the issues working people face. She’s one of two renters on City Council, as well.

In her time on Council, she has been honored by the Alameda Labor Council, and has championed causes like wildfire prevention, street paving, better funding for parks, public safety, with the innovative MACRO program providing non-police responses to people experiencing mental health crises, Oakland’s eviction moratorium, and funding for affordable housing,

Steve Lavoie is a Senior Librarian who has been an Oakland City worker for more than 30 years. He serves as the Chapter’s Delegate to COPE, the Committee on Political Education. He said, “Sheng Thao is exactly the person Oaklanders need as their mayor. She was elected to council because she knows how to get things done in this city and as mayor, she can take on even bigger assignments. She values us workers for what we are: the bedrock of the city’s vitality and success. Oaklanders have gone too long having their City Hall serve as little more than a stepping stone to higher political ambitions. Councilmember Thao’s ambitions are directed toward making a great city truly great by giving it a mayor who cares deeply for the people who live here and who depend on everything Oakland has to offer.”