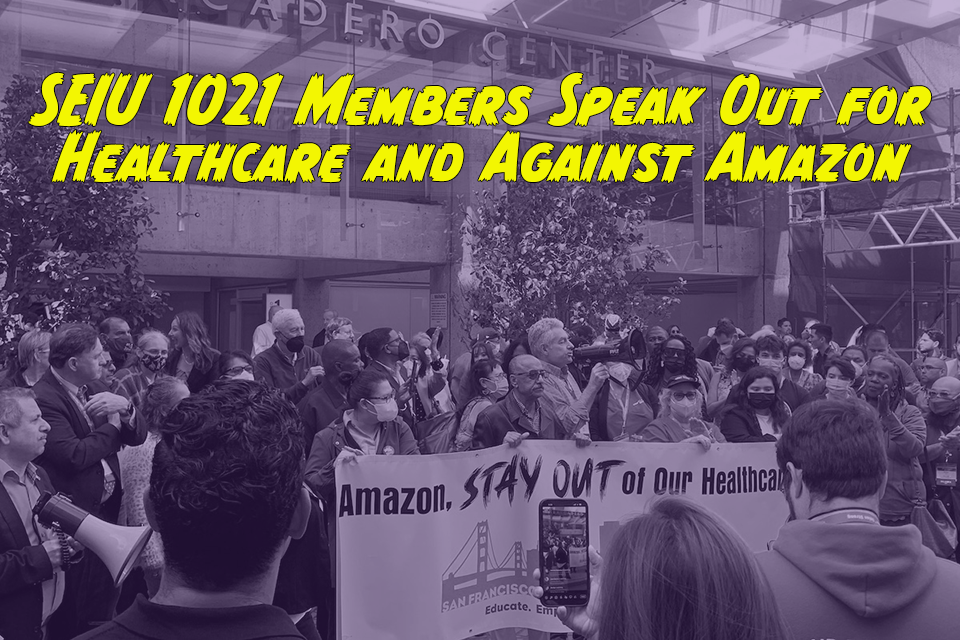 Wherever voices are being raised to rein in corporate power and stick up for working people, you’ll find SEIU 1021 members. Last week was no different, as hundreds of union members and community activists marched through San Francisco’s financial district to rally outside One Medical’s headquarters to protest their impending acquisition by Amazon, with SEIU 1021’s own Nicole Christian leading the way.

Nicole is an SFMTA worker and serves as the chair of SEIU 1021’s Social and Economic Justice Committee. At the rally, she called attention to Amazon’s motivation for buying One Medical, which is a direct provider of medical services at over 200 locations across the nation: access to medical records and the consumer data they might contain.

Medical records are for patients and doctors, not for for-profit companies. As Nicole told the Liberation website, “It’s disgusting — being a delivery company and now trying to take on healthcare — that’s 15 years of medical records! Why would anyone be privy to that? This is the same fight we took on against Mark Zuckerberg and Facebook; why do you need that access to medical records?”

The march took place amidst the California Labor Federation convention. Union activists from the San Francisco Labor Council, California Nurses Association, Teamsters, and a number of SEIU locals from around California all participated. Also at the front of the pack was Chris Smalls, who is President of the newly-formed Amazon Labor Union.

As corporate power continues to grow, it’s more important than ever for working people to keep themselves informed. We must also be willing to speak up and work together to win the better world we know is possible, one where private medical information isn’t used by the world’s wealthiest people to make even more money.