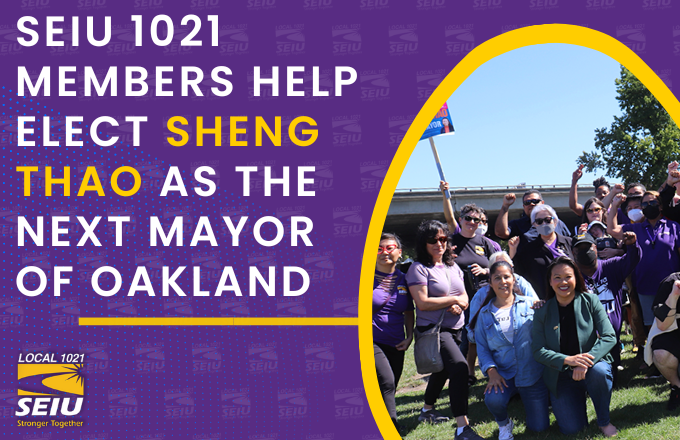 The dust has settled, and Sheng Thao will be the next Mayor of Oakland. From the moment she announced her candidacy, SEIU 1021 members have been on the front lines doing the work to talk to voters and support her candidacy.

If you’ve been to an SEIU 1021 rally, protest, or picket line in Oakland in recent years, there’s a good chance you saw Sheng Thao there too, standing with us.

In her time on Council, Sheng has been a strong ally for working people in the city. She’s been honored by the Alameda Labor Council for her work, and has championed causes like wildfire prevention, street paving, better funding for parks, public safety, with the innovative MACRO program providing non-police responses to people experiencing mental health crises, Oakland’s eviction moratorium, and funding for affordable housing.

During the campaign, SEIU 1021’s City of Oakland Chapter President Felipe Cuevas said, “I’ve known Sheng for years, going back to her time on Rebecca Kaplan’s staff. She has always made the effort to reach out to us, and, as a former City worker herself, she understands our issues well. She has advocated for us on City Council and showed up to support us on our picket lines. Getting a pro-worker Mayor into office will give workers a greater voice in the policies and priorities of Oakland.”

SEIU 1021 members were proud to knock on doors, make phone calls, and help spread the word about Sheng’s candidacy for Mayor. Now, we’re excited to see how she’ll continue to be a champion for Oakland’s working families.