Mills College Staff March on the President’s House Demanding a Fair Contract & Just Transition The college is scheduled to be acquired by Northeastern University this summer, and there have been no guarantees in writing that employees will keep their jobs. 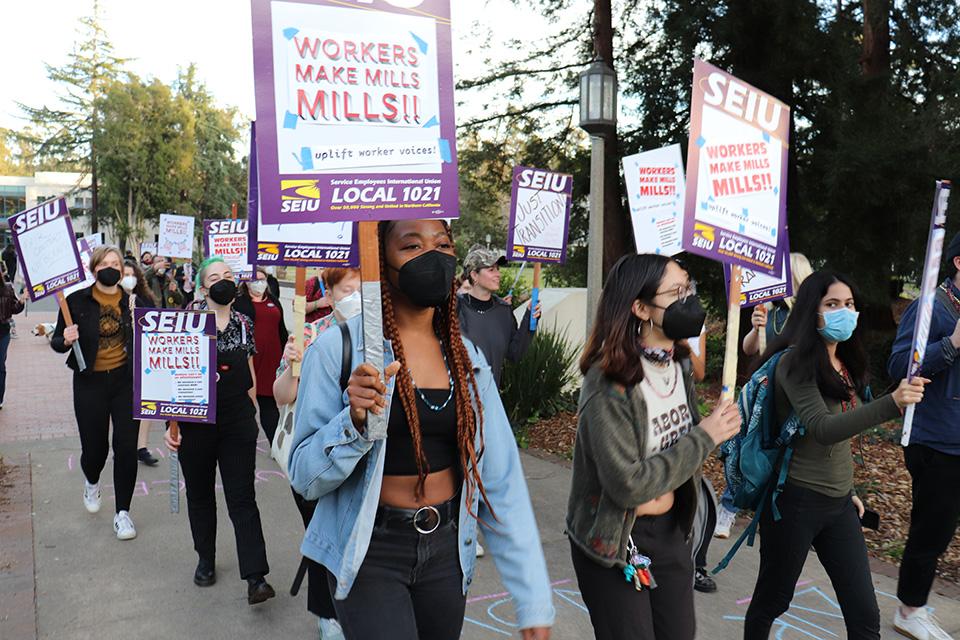 Last Tuesday, March 1, dozens of Mills College staff, faculty, students, and alumnae converged on Holmgren Meadow to make administration hear their demands for a just transition. They started with a festive Mardi Gras-themed gathering, followed by a march to the on-campus mansion of the college president, Elizabeth Hillman, where they led a spirited rally and a candlelight vigil.

Mills staff are seeking a fair contract that will put them in a strong place to negotiate with Northeastern University when it acquires the college this summer. While Hillman has talked a lot publicly about the acquisition saving jobs, no such assurances have been put in writing. In fact, administration has continued to delay and slow-walk the collective bargaining process, seemingly hoping to run out the clock until Northeastern takes over the college.

“After nine months of bargaining, at a time when staff with unstable futures have been given the monumental task of transferring ownership of the college, Mills responded to the staff union’s economic proposals of modest raises and better severance with a wholesale rejection of every article,” explained Brendan Glasson, technical director of the music department. “Mills uses the language of social justice while ignoring the very real needs of the people it employs. We want the president of Mills and the board of trustees to know that staff didn’t unionize with 94 percent of the vote in order to maintain the status quo–we did it as an expression of mutual aid with our colleagues. Labor justice is social justice.”

Publicly, President Hillman has claimed that the move will save programs and prevent layoffs. In reality, neither Mills nor Northeastern has been willing to put any such assurances in writing. Not a single staff person or adjunct professor has been given any guarantee of having a job after July 1, when Northeastern takes over. In fact, at a faculty town hall just last week, administrators announced that Mills cannot offer any majors that compete with majors offered on Northeastern’s Boston campus—meaning departments such as biology and English will be decimated, while current students may find themselves unable to complete degrees in their chosen majors.

Mills College staff voted by nearly 95 percent in March of 2020 to join adjunct faculty, who teach 75 percent of courses at Mills, in SEIU 1021. Yet nearly two years later, they still do not have a first contract. Administration has hidden behind notorious union-busting lawyer Mike Vartain—who leads negotiations for administration at California College of the Arts as well. The staff there recently went on a four-day unfair labor practice (ULP) strike in February to combat the use of stonewalling and delay tactics to avoid reaching a fair agreement.

Mills staff are also considering an unfair labor practice strike to push administration to settle a fair contract that sets a precedent as Northeastern takes over. While adjunct faculty have a current collective bargaining agreement in place, they too demand assurances that they will keep their jobs and that their contract will be honored by Northeastern—which both Mills and Northeastern have so far refused to provide.

“This idea of a just transition is really important to us because it’s something that affects not only staff but all of us here,” said Glasson at the rally Tuesday. “There’s a feeling that the people of this institution are an afterthought. You can’t make a plan for the buildings and the assets without taking care of the people here, and that seems to be exactly what Mills is doing. We’ve given them every opportunity to show that the people here are important and they’re not doing it.”

Other staff, students, adjunct faculty, and alumnae also spoke at the rally. “I think that administration needs to care about the workers. Workers make Mills Mills. We are here for the students, but the students can’t be a part of this institution without us. We help it function for them. Despite the difficulties I’ve had since I started, I’m here 3.5 years later because of my colleagues, my community, and the students,” said Alana Guth, an administrative assistant.

You can catch some of the rally on this coverage from KTVU.