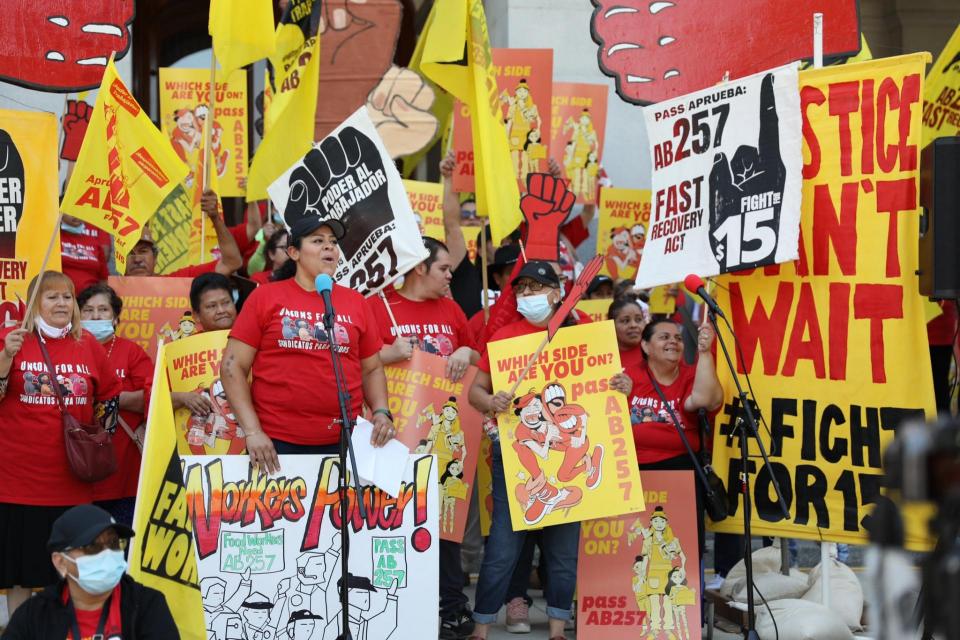 On Tuesday, August 16, 2022, hundreds of fast-food workers rallied at the state capital building in Sacramento and across the city at various fast-food restaurant locations, demanding that California state senators pass the FAST Recovery Act and for California Governor Gavin Newsom to sign it into law.

The clock is ticking. Fast-food workers across California are gearing up for one final significant push to bring Assembly Bill 257, the Fast Food Accountability and Standards Recovery Act, or FAST Recovery Act, home. A full vote on the floor of the California State Senate is expected any day now. After passing the California State Assembly in late January, fast-food workers with the Fight for $15 and a Union movement and SEIU Local 1021 members have been working tirelessly to ensure that California’s over a half-million fast-food workers win workplace justice and the right to form a union. With more than 557,000 workers across more than 30,000 locations, California’s fast-food industry stands out as one of the state’s largest, fastest-growing low-wage workforces.

The FAST Recovery Act is the culmination of years of worker organizing across the state that immigrants and people of color have led. AB 257 gives workers the power to tackle systemic economic and racial justice issues that have plagued the fast-food industry because they will be at the table crafting the solutions they want to see.

By passing AB 257 – the FAST Recovery Act, California will create a sector council where workers, fast-food employers, and government officials work together to craft common-sense solutions to the issues that have long plagued the industry. Frontline workers are best-positioned to help propose and implement solutions to the daily problems they face on the job. The FAST Recovery Act brings workers to the table and gives them a chance to rewrite the rules so that rules keep them safe.

“Throughout the pandemic, we have heard that frontline workers are essential. They get paid lip service and nothing more. When you have workers, mostly Black and Brown, who have been regularly assaulted, robbed, spat on, yelled at, sworn at, and told to go back to ‘their country,’ we need more than lip service. We need more than empty platitudes.

When you have massively large corporations like McDonald’s making $7.545 billion in profit last year, and it all goes to its CEO, board of directors, and shareholders, you know something has to change. Violent activity and workplace safety at fast-food restaurants across California lead to tens of thousands of 9-1-1 calls a year, to the detriment of workers and the surrounding community. Meanwhile, fast-food corporations refuse to take concrete steps to address the problem. Through hundreds of strikes and actions across California, fast-food workers have exposed how fast-food corporations like McDonald’s and others are mistreating and outright ignoring their workers. So, what do we, as workers, do when we’re under attack? We stand up and fight back.

Like workers across all industries, fast-food workers will no longer tolerate having a lack of a voice on the job or a seat at the table. That is why we are out here today. We demand justice. Assessment Bill 257, the FAST Recovery Act, would give workers a seat at the table to increase corporate accountability across the fast-food industry. AB 257 allows fast-food workers and employers to set binding standards to address the violence crisis and enables franchisees to push corporate franchisors to provide the resources needed to prevent violence and operate safe restaurants. No worker should feel unsafe, especially when we have to work through a worldwide health pandemic.

The working conditions I hear and see, such as COVID-19 outbreaks at stores, are harrowing. With billions of dollars in profit, these corporations can’t provide proper personal protective equipment and tell workers to wear doggie diapers or coffee filters as masks. Then, when workers do get sick, they’re forced to continue working under the threat of retaliation. Hell, they don’t even get paid sick days when they are lucky enough to take time off. When fast-food workers come to work every single day, during pandemics, extreme heat waves, the threat of violence, and more, they need protection. When we say that SEIU is pushing ‘unions for all.’ We mean ‘unions for all.’ Every worker in California deserves to feel safe at work, regardless of race, gender, or where they were born.”