Felton Management locks workers outside of building during lunch rally 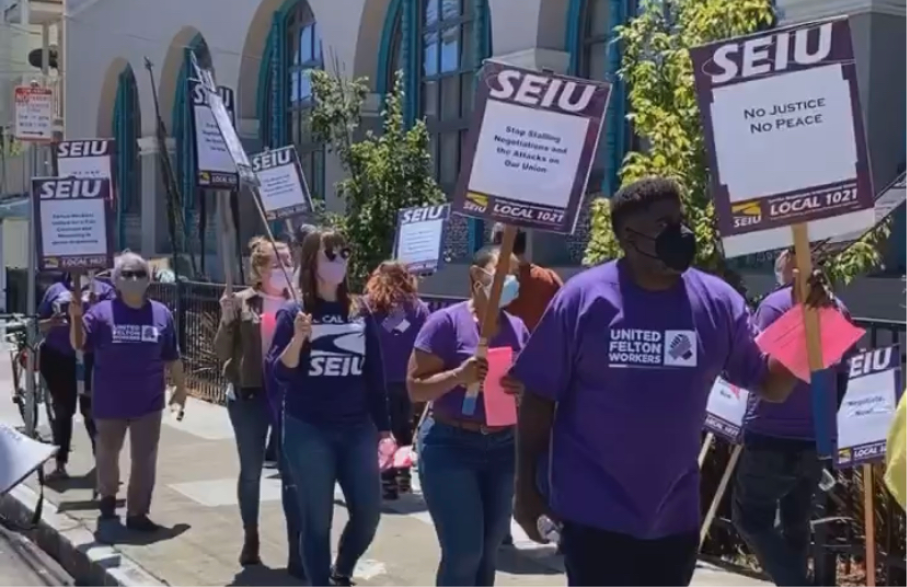 On August 9, workers marched and rallied at a lunchtime break action outside the Felton Institute’s Family Developmental Center building. Workers were voicing their frustration with management’s unwillingness to negotiate a fair contract with existing members at Felton while also protesting management’s attempts at intimidating the not-yet-union workers attempting to join SEIU 1021.

The situation at Felton has been unfolding for some time. SEIU 1021 represents dozens of workers at Felton currently, but the majority of the workforce is still nonunion. While a handful of workers currently represented by SEIU 1021 are fighting for a new contract, the rest of the Felton workforce is organizing to join their colleagues in our union. Management has chosen not to honor a neutrality agreement they made with SEIU 1021, and have instead chosen to deploy union-busting techniques to scare and intimidate workers.

It was apparent that management knew SEIU 1021 organizers were coming to meet with workers at their lunch break and they scheduled a window cleaning for the same time as the lunch rally. When that failed to stop the workers, management decided to lock the doors of the building to discourage workers from joining the action. The rally went on despite these challenges.

Like so many of us, these workers are facing short staffing issues due to hiring and retention problems. These problems impact the clients Felton Institute serves—particularly the most vulnerable. Those impacted include autistic and medically fragile children, pregnant and parenting teens, special-needs children, uninsured or low-income families, and people whose childcare and safety depend on services provided by the Felton Institute & its workers.

“There’s no staffing, there’s no negotiating. They don’t want to staff and it’s not the same quality of work environment as other places. We need a better workplace!” said Reyna Ferreira, Teacher and Aracely Duran-Cervantes, Teachers Assistant at Felton Institute.

Felton workers plan to continue to do lunch break solidarity actions at different Felton work sites while they continue negotiation with management.