Fed-up Mendocino County workers hold pickets in Willits, Ukiah, and Fort Bragg to alert public to administration’s failures As the San Francisco lawyers negotiating for the County rack up hundreds of thousands in fees, administration stubbornly refuses to address the staffing crisis decimating critical services for the county’s most vulnerable, demanding takeaways

The stench of hypocrisy is in the air, as Mendocino County administration claims it can do nothing to staunch the outflow of its workforce. Many of these workers are paid so far below market rates for stressful positions serving the county’s most vulnerable residents that they can earn more at burger joints. In fact, they are now demanding that their workers accept a 16 percent increase in healthcare costs in exchange for a mere two percent cost of living adjustment (COLA).

Meanwhile, they are paying their San Francisco lawyers 40 percent more than what they paid their former labor lawyers in 2020-2021, as they drag out negotiations with little incentive to settle a fair contract quickly.

Mendocino County workers have had enough. Starting last Tuesday in Willits, Wednesday in Ukiah, and Thursday in Fort Bragg, they spent their lunch hour picketing downtown in their respective towns, educating the public on the impacts of the County’s inaction on services in Mendocino County. Between April 1 and June 30 of this year alone, the County hired 73 employees – and lost 63. At this rate, it will take years to fill the 400+ vacancies. If the County gets its way with its healthcare scheme, the situation will be still worse. And it’s the county’s most vulnerable – like abused and neglected children, low-income seniors, and people with disabilities – who will pay the steepest price.

“​​I spoke with a nurse who is a single mom. When the hospital had her working nights, she didn’t want to leave her children alone and had trouble finding reliable childcare at night. So she took a huge pay cut to come work for the county,” said SEIU 1021 Mendocino County Chapter President and Senior Public Health Analyst Julie Beardsley to the Mendocino County Board of Supervisors at their last meeting. “But her salary is so low, she’s maxing out her credit cards, and now she’s thinking of moving out of the county. This 16 percent  increase in health insurance costs will certainly be the thing that pushes her out.”

With an average vacancy rate of 27 percent, and much higher in some critical classifications, critical service workers have been stretched beyond thin. For example, social workers responsible for monitoring the safety and wellbeing of vulnerable children and for assessing reports of neglect and abuse have unsustainable caseloads due to a 40 percent vacancy rate, forcing delays in visits and follow-ups that can have life-or-death consequences.

“The County’s finances are sound,” said Beardsley. “A review of the County’s past budgets shows that there is plenty of flexibility. In negotiations, we’ve suggested a range of options that the Board has to get the County on track, support its employees, offer salaries that will attract new employees to reduce the high vacancy rate, and make sure that we are carrying out the essential programs and services that county residents rely on. Lives are literally at stake. It’s time for the Mendocino County Board of Supervisors to force county administration’s hand to do the right thing. We are asking the public to support us in calling on the Board to show it cares about our county’s residents.”

Want to support Mendocino County workers? Send an email to the Board of Supervisors and county administration with just a few clicks here. 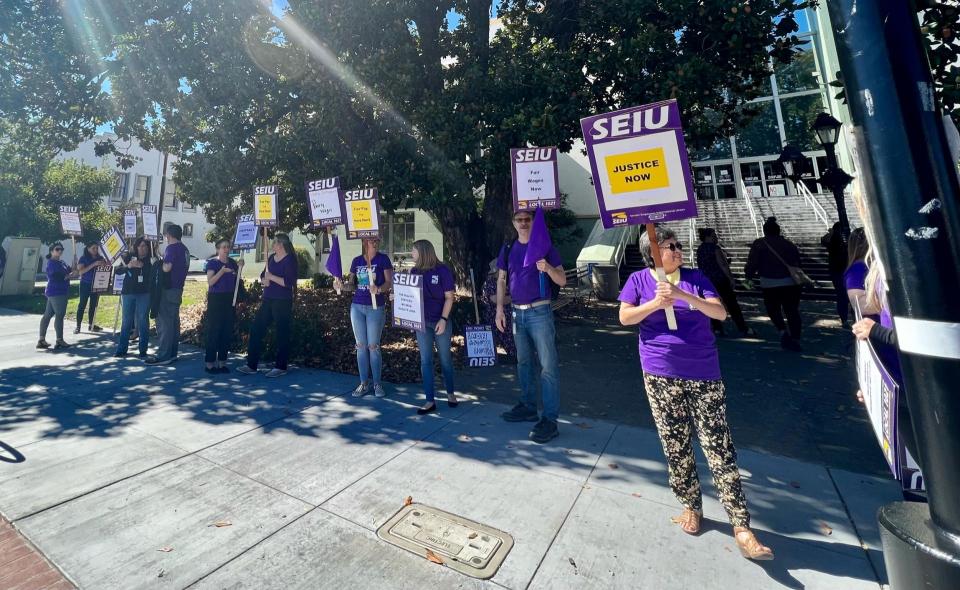