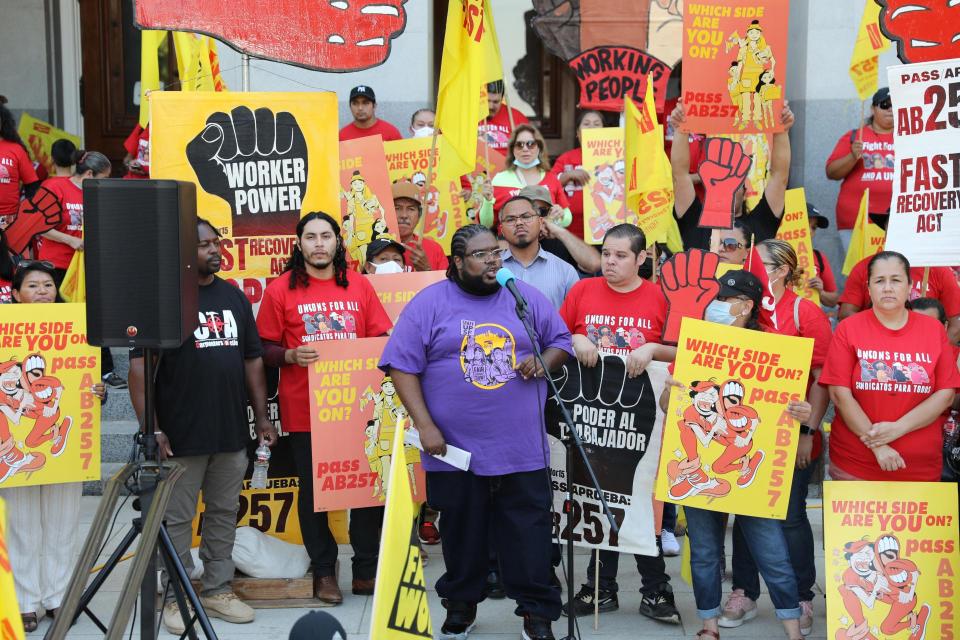 While fast-food corporations like McDonald’s Corporation, Burger King Corporation, Jack in the Box, Inc., and others attempt to roll back the significant gains with the passage of 2022’s Assembly Bill 257 – the Fast Food Accountability and Standards Recovery Act, or the FAST Recovery Act for short, fast-food workers continue the fight for higher wages, safer workspaces, and a union.

In San Francisco, fast-food workers won a major and long-deferred victory against their former employers. The victory resulted in the order by the state to pay $2.2 million in wage theft citations. Former Burger King workers said the restaurants were intentionally understaffed to cut labor costs. Employees frequently worked off-the-clock or overtime without pay — sometimes as late as 2 am. One cook stayed after her shift ended because if she had left, there would have been no one in the kitchen. They said that employees often worked through breaks or were denied breaks, while managers were under pressure from the owners to meet sales goals while keeping labor costs low. They often doubled as cashiers, took out the trash, and performed other duties not assigned to their positions.

“The violations at issue were not isolated instances that were the fault of rogue supervisors, but, based on the evidence, part and parcel of a way of operations initiated and/or known by both [owners],” the California Labor Commissioner Office’s decision reads.

As if the wage theft in San Francisco was not enough for the greedy multinational corporations, fast-food companies are attempting to subvert democracy by attacking AB 257 – the FAST Recovery Act.

“Every day AB 257 is kept on hold is another day that half a million fast-food workers across our state continue to face the threat of wage theft, sexual harassment, unsafe working conditions, and more,” said Perla Hernandez, a Burger King worker in San Jose, and leader in the Fight for $15 and a Union. “No matter how much companies like McDonald’s and Starbucks spend to try to silence our voices, we will keep up the fight until those corporations meet us at the table.”

“McDonald’s and Burger King want to repeat the same playbook Uber and Lyft used in 2020 with their $200 million campaign to deny gig workers their basic rights and benefits,” said Sandro Flores, Los Angeles Carl’s Jr. worker and leader in the Fight for $15 and a Union. “That’s not respecting democracy or workers’ rights — that’s a corporate power grab.”

“No lawsuit and no threat of a referendum will stop workers from organizing in their workplaces and speaking out about the violence, discrimination, harassment, wage theft, and retaliation they face on the job while being paid some of the lowest wages in the state,” said Mary Kay Henry, the International President of the Service Employees International Union.

Fight for $15 and a Union movement, along with SEIU Local 1021, is committed to supporting fast-food workers in their fight to defend the pro-worker landmark law and use their voices to create the change their industry and communities need. The same tactics will not fool workers and voters across California that greedy corporations pulled with 2020’s Proposition 22. The fight continues.