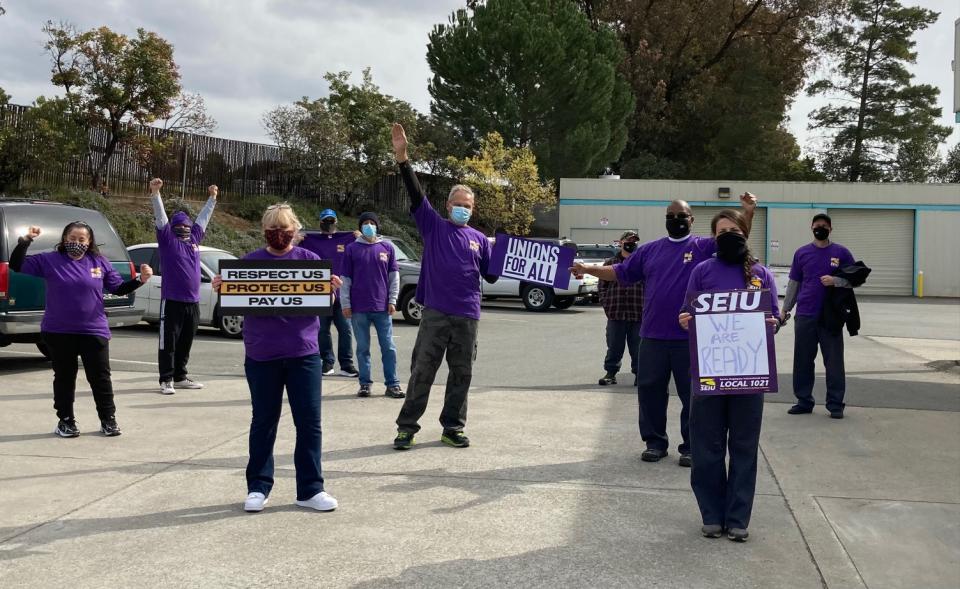 The workers of Contra Costra County’s Mosquito and Vector Control District recently voted unanimously to ratify their hard-won new contract, bringing a long campaign to an end. The new three-year contract includes a 1.5% raise and $1,600 signing bonus in the first year, with raises in the second and third years based on the published Consumer Price Index, with a 1% minimum and 4% maximum, to keep these workers from falling behind. The unit’s seasonal aides also received an additional $3 per hour. The workers won new flexible start times for summer work, increased ability to use floating holidays throughout the year, a better, clearer grievance procedure, a reduction in the length of time disciplinary records are kept, and more.

Throughout the campaign, the members took their case to the Board of Trustees who oversee the District, so that the decision-makers could hear directly from working people who were fighting to improve working conditions for 1021 members, streamline operations for the District, and, most important of all, allow everyone together to better serve the public. Two members, Joe Cleope and Heidi Budge, wrote to the Trustees to tell them how much their work meant:

I have been employed with the district since 1999. Protecting the residents and our constituents within Contra Costa County from potential risks and disease has often been praised by the general public and those I’ve served through the years. I have always felt the importance of maintaining a good working relationship with management, including the Board of Trustees, some of whom I’ve served myself. My goal continues to be to provide the best integrated pest management practices to uphold our vector control programs, our mission statement, and protect the general public from vector-borne disease. It has been gratifying serving those in Contra Costa County and being a representative of this district throughout my years of employment. I have thoroughly enjoyed the relations that I’ve built, along with a solid foundation of trust when called upon. Every day, I look forward to doing that work and providing that example.

I started with the district in 2008 as a seasonal aide, and then in 2018 I was hired as a vector control technician. I love my job and I put my heart and soul into it. I look forward to coming to work in the morning and one of my goals every day is to provide the best customer service to the residents of Contra Costa County. I am committed to keeping people healthy and preventing nasty viruses from making them sick, or preventing them from enjoying the community they live, work, and play in because of the mosquitoes, yellowjackets, or rodents causing havoc. I understand that I have a huge responsibility to uphold and it can’t be done alone. I’m proud to serve the community alongside my coworkers, who are also dedicated public health servants. Together, we work as a team—all of us do—from the vector control technicians and inspectors to the office staff and the lab, along with our supervisors, and our general manager, who is outstanding in her role, and provides us with ample opportunities to learn and grow, which enables all of us to be better at our jobs. We are lucky to have such great talent at our district. All of us work together for the betterment of our community we serve and protect. None of us could ask for better folks to work with.

In the end, their letters and testimonials and actions paid off, and the members won a new contract. Heidi and Joe summed up the experience by saying, “Always question authority and believe in self worth united together in solidarity.”