Workers’ Rights in the Gig Economy 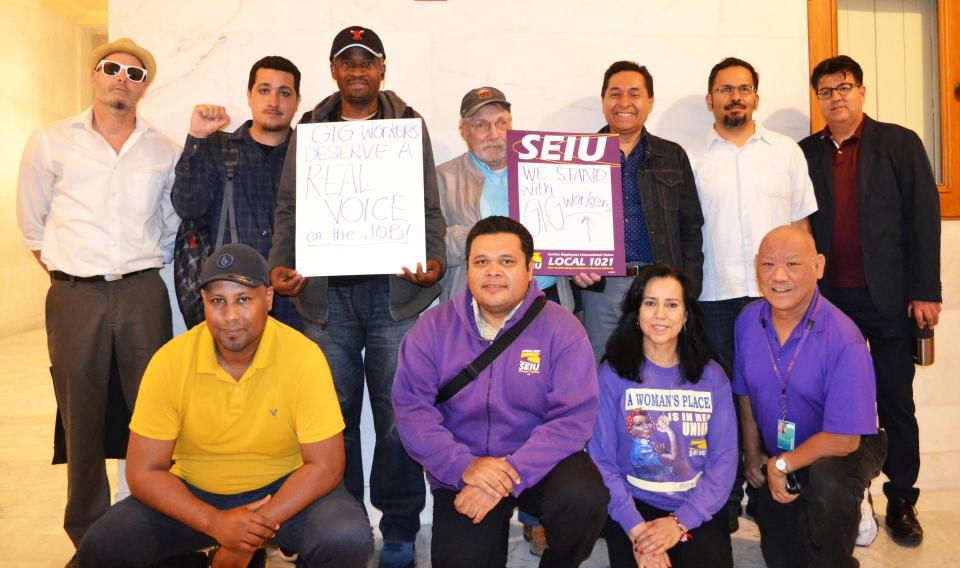 Online platform workers are organizing together to demand living wages, benefits, transparency, and a voice on the job. They’re exposing the ugly truth behind the business practices of billion-dollar gig corporations that profit off of their hard work without following labor standards.

In a hearing on the status of workers’ rights in the gig economy convened by San Francisco Board Supervisors Rafael Mandelman and Gordon Mar, gig workers flooded a City Hall hearing room on Friday, June 28 to shed light on their treatment by gig corporations.

“I feel trapped, like one of those caged hamsters running on a wheel,” testified Lyft Driver Adona Laval. “If I work normal hours, I do not earn enough to exist in the Bay Area and certainly not enough to cover my son’s health insurance, school expenses, etc. If I work longer hours—which I have done plenty—I end up with many more car maintenance costs, gas costs, my health deteriorates, and I put myself, my passengers, and others at greater risk of accidents due to fatigue.”

“Since Lyft incentives have traditionally been tied to number of rides rather than time on the road,” Laval continued. “I’m constantly encouraged to push myself past my limits, to keep running faster and faster in the Lyft hamster wheel.”

“I’m spending more time on the road, with less money in my bank account,” said one Uber/Lyft driver, Anette. “Uber and Lyft have preyed on low- and middle- class families like mine. They advertise lies and sold us unattainable dreams because they knew where they were taking their business. And where they were taking their business never included the drivers. We were always a means to an end.”

Alaina, a member of National Domestic Workers Alliance, shared how it’s not just drivers who are being exploited in the gig economy. She’s been a nanny for 19 years in the Bay Area and, like many domestic workers, has turned to online platforms in search of work.

“Gig economy platforms have changed the way domestic work is found, mediated, and paid for. These companies have become arbiters of domestic work standards.” she testified. “Working conditions are now shaped by ratings, reviews, access to the platform, and distribution of jobs via algorithms, which is technology that didn’t exist just a few years ago.”

Alaina concluded her testimony by urging elected officials to pass a resolution in support of AB 5. AB 5 protects workers from being misclassified as contractors instead of as employees who are entitled to minimum wage, benefits, and other basic labor protections.  “I believe that AB 5 is essential to protecting vulnerable workers in the gig economy, and to keep companies that have little regard for the well-being of their workforce and the state’s economy accountable.”

Allies including the San Francisco Labor Council, SF Progressive Workers Alliance, SF Jobs with Justice, SEIU 1021, SEIU USWW, Teamsters Joint council 7 and UFCW California attended in solidarity with the gig workers rising up against exploitation. They testified to urge SF Board of Supervisors to pass a resolution in support of AB 5 and for the Board to do everything in its power to uphold San Francisco’s labor laws for gig companies that operate within the city.

“We sit here in a city that Lyft and Uber call home, but whose laws they refuse to follow,” testified Ramses Teon-Nichols, Vice President of Organizing for SEIU 1021. “These corporations are acting as if the same rules that apply to everyone else doesn’t apply to them—including the rules that demand they treat their workers with dignity and respect.”

Join us, the California labor community, and gig workers in Sacramento on July 10 to urge legislators to pass AB 5. For more information and to RSVP, contact Chema Hernandez Gil at chema@seiu1021.org.