Workers Rally to Proclaim: “No Corporate-Funded Case Can Hold Us Down. We’re Sticking with Our Union”

February 26, 2018, the Supreme Court began hearing oral arguments in the Janus vs. AFSCME case: this case was funded and brought before the court as yet another attempt by the 1% to rig the economy completely in their favor.

To show that no court ruling or corporate-funded case can hold us down, more than 500 workers united in SEIU Local 1021 joined hundreds of other working people in front of San Francisco’s City Hall.

“We know California needs unions. We know this country needs unions,” said SEIU 1021 Regional Vice President Joseph Bryant, addressing the rally. “If we don’t have a strong labor movement, that growing gap between the wealthy 1% and the working class will continue to grow.” 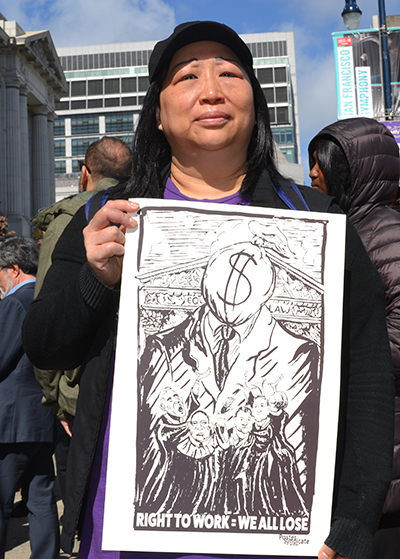 The continued assault on working people and their rights affects the most vulnerable among us. SEIU 1021 member Teresa Lee works as an Eligibility Worker for the San Francisco Housing Authority, providing Section 8 housing and housing for low-income public housing residents. She described the Janus case as “Just a ploy to reduce the strength of working-class people, people who have always been underrepresented, and have had to suffer at the hands of wealthy interests.” When asked what she was going to do if the Supreme Court ruled against working people, she simply said “I’m going to stick with my union.”