Why We March on Martin Luther King, Jr. Day 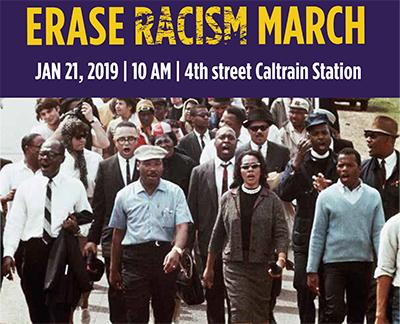 On Monday, January 21, all across the country, thousands are expected to march in commemoration of civil rights leader Martin Luther King Jr. In San Francisco, City and county workers will join the march to honor Dr. King’s legacy and to continue his fight for justice for all.

WHAT: Erase Racism March
TIME: Meet at 10 a.m.
LOCATION: Join us at the CalTrain station (4th/King Street in San Francisco) to welcome the MLK Freedom Train marchers or board buses at 780 Mission Street after the SF Labor Council MLK Breakfast.

“We are marching because Martin Luther King Jr.’s dream is still deferred,” said Alyssa Jones-Garner, a senior clerk at the SF Department of Public Health. “We are marching because his hope for a future free from hate, intolerance, and racism has not yet been realized. Every day in this city, his brothers and sisters of color are used, harassed, and degraded. Enough is enough.”

Last November, City leaders called for a public hearing on racism in City departments. The Mayor and Board of Supervisors heard testimony on how African American workers continue to face discrimination in the workplace, particularly in terminations, probationary releases, medicalseparations, and opportunities for career advancement. Workers testified about the ways the City’s employmentpractices and housing policies have contributed to the alarming rates of displacement of African Americansin the city.

“I’m marching in support of my union brothers and sisters who are facing discrimination and retaliation on the job,” said Jesse Stanton who works at the Hall of Justice as senior clerk in the SF Examiners’ office, “As a shop steward, I’ve heard of too many workers facing racism on the job, here in the city and county of San Francisco.”