Why we do politics 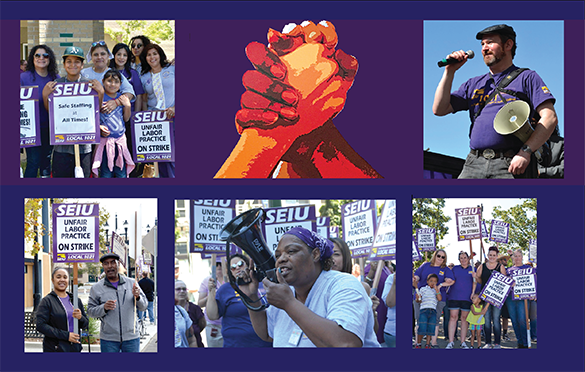 A Message from SEIU 1021’s Executive Board

The struggle for the rights of working people happens on many levels. There is organizing and the hard work of bringing new members into the union. There are contract negotiations and sometimes, strikes. There are shop stewards and union staff who make sure contracts are enforced. There are legal battles and fights to protect our rights in the courts.

And there are elections, politics, and organizing to get pro-labor candidates into public office. None of these efforts works in a vacuum. They are all part of the same campaign to build a more just and equitable society where working people — not just the billionaires and big corporations — have the right to a decent standard of living, to economic security, to health care, to housing, to a good education for their kids and to good public
services.

The decisions that affect our lives are made not just at the bargaining table but at school boards, city councils and county boards of supervisors; at the state Legislature and the White House, U.S. Congress, the Supreme Court and the offices of mayors and governors.

It’s critically important that the voices of working people are heard at all of those levels. And the only way that politicians will listen to us is if we work actively to elect and hold accountable people who support our agenda.

On the national level, the Supreme Court nearly dealt a devastating blow to public-sector unions — whose members are workers who deliver state, county, city and special district services to the public — which is why we will be working with you to make sure that the next members of the Court are nominated by a Democratic president — and confirmed by a Democratic U.S. Senate.

On the state level, we are working to get members of the Legislature who are willing to work with us against a governor who still insists on austerity measures for public services despite a booming state economy.

But some of our most intense electoral work is on the local level. All too often, local officials vote against labor and refuse to negotiate in good faith and agree to fair contracts. In cities, counties, school districts and special agencies like the BART Board and water districts all over Northern California, we have had to strike, picket and protest — for more hospital services, better schools and safety-net services for the most vulnerable in our communities. So when elections come around, we need to make sure those public officials are held accountable.

In June, our electoral work helped change the way that members of the Hayward City Council, which imposed a contract with severe service cuts on us, are elected. In November, we may be able to shift the balance of power at the Sonoma County Board of Supervisors where we had to strike for a contract.

The Oakland School Board has privatized more than 40 schools, eliminating union protections for the staff; in November, we hope to elect a School Board that can change that pattern. We have a strong candidate for BART Board who may be able to replace one of the most anti-labor members of that agency.

We also work with our allies to build better communities for all of us. We will be pushing rent control measures in Richmond and Oakland this fall — because our members, and their neighbors and friends, have to pay rents that are way too high.

It’s sometimes hard to find time to volunteer on political campaigns. But workers who have turned out in huge numbers to rally for fair contracts need to understand the importance of electoral work and the impact it has on our lives.

In cities all over the state we are finding that, even when we are outspent by the billionaires, the privatizers and the austerity-makers, we can still win with old-fashioned boots-on-the-ground efforts. Grassroots politics works — and we will be calling on everyone who can help to join us this summer and fall.

Take a stand. Do your part!

Volunteer for precinct walks and phonebanking.

Hillary Clinton has proven she will fight, deliver and win for working families and that’s why hundreds of SEIU members across the county are knocking on doors and turning out voters to elect her as the next president.

There’s simply too much at stake in this election. Be a Weekend Warrior Volunteer and get on the bus to Reno, NV to walk for Hillary! Reserve a spot today!