When we fight, we win: labor beats back the anti-union recall 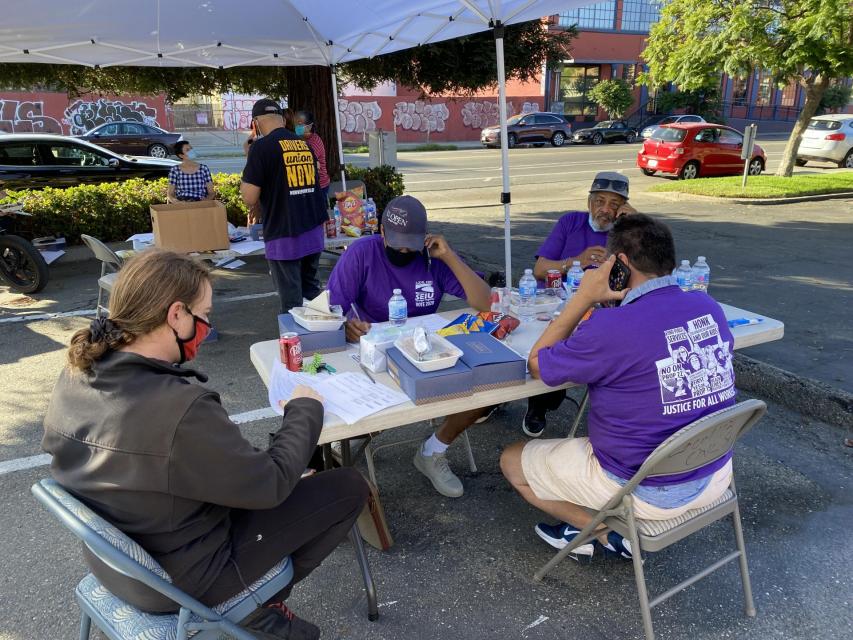 Last week, a threat to California’s democracy was defeated when the California gubernatorial recall election failed. With eighty-five percent of the vote counted so far, over sixty-three percent of voters rejected the right-wing, anti-union recall of Democratic Governor Gavin Newsom.

The power of SEIU members was on full display during this election. Along with the Fight for $15 movement and gig workers, SEIU members made the victory happen through local and state-wide voter outreach efforts.

Governor Newsom heard loud and clear from Local 1021 members as we campaigned side by side that the Republican-led recall would be disastrous for workers.

“There was an outright Republican attempt to thwart our democracy, and it was the labor movement that beat back the right-wing, anti-union recall,” said SEIU Local 1021 Vice President of Organizing Jennifer Esteen.

Hundreds of SEIU Local 1021 members and staff called all of our 60,000 members. We knocked on over 412,000 doors, with over 250,000 of those visits happening during the last four days of getting out the vote (GOTV) alone. Additionally, we made over 4.8 million calls to voters.

“Having Gavin Newsom remain as California’s governor means we will have a governor who will continue to fight COVID-19, a pandemic that SEIU Local 1021 members know all too well and face on a daily basis,” Esteen continued.

Fight for $15 fast-food workers and gig drivers also joined our efforts. Governor Newsom knows it’s the significant contribution of workers across Local 1021 who helped deliver the landslide win. The governor will continue putting workers first in his “California for All” agenda.

Esteen added, “Gig workers from We Drive Progress, a movement of Northern California app-based drivers, and fast-food workers from the Fight for $15 movement phone banked and canvassed for the anti-recall campaign. Those workers know better than anyone else that having a labor-friendly ally in the governor’s seat is vital for making sure app-based drivers and fast-food workers have a voice on the job, be treated with dignity and respect at the workplace, and have the fundamental right to form a union.”

The stakes for the election could not have been higher. We beat back the Republican-led effort to attack science, democracy, and worker justice. Now, we can get back to the all-important work of providing California the essential services needed to recover from the pandemic.

With last week’s landslide victory, we have momentum going into next year’s election. Unions are at a historic high approval rating, and the time is now to expand the labor movement and our power.

“Securing the win we had last week will set up to advance our ‘Unions for All’ campaign to make sure that all workers have a union and are afforded all the rights any union member has,” Esteen concluded.