VICTORY in Our Fight for Health Care Justice 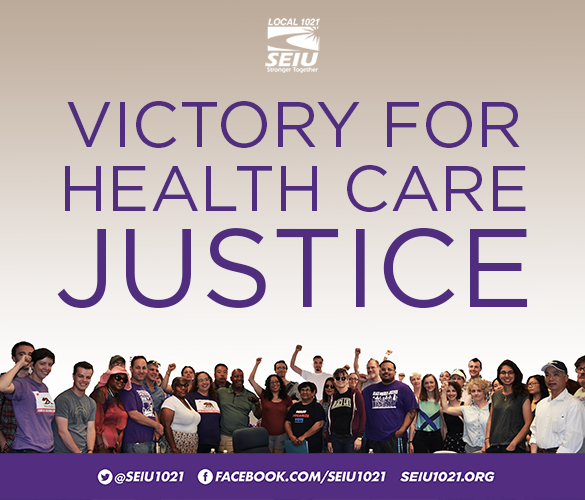 After months of pressure from SEIU members across the country, hundreds of allied organizations, and thousands of individuals of all political persuasions, the effort in Congress to repeal the Affordable Care Act failed late Thursday night.

“SEIU 1021 members knew this repeal would be devastating if it passed, and we sprang into action right away. We made phone calls to members of Congress and attended town hall meetings and protests,” said nonprofit worker and SEIU 1021 Vice President of Politics Alysabeth Alexander. “Our testimony about our family members, clients, and patients illustrated the suffering that would occur from kicking those with preexisting conditions off of healthcare plans, or placing lifetime caps on coverage. It was all of our voices raised together that stopped this repeal in its tracks,” continued Alexander.

This was a victory for the labor movement, and a testament of the strength of the coalition of diverse groups that formed to save health care for 32 million people, and the jobs of those who care for them. Kicking these people off their plans would have made plans for those retaining coverage even more expensive.

We have learned that politicians will serve the wealthiest people in this country at our expense unless we make our voices heard. When SEIU members join together we can beat back even the most well-funded attacks. This effort was made possible by COPE membership, a voluntary contribution that SEIU members make to build political power for working people locally and nationally. When we take on politicians who do the bidding of Wall Street instead of Main Street, we depend on the strength of SEIU COPE to hold them accountable.

We have learned how to win. Now, let’s make sure we hold Congress accountable as they take up the federal budget. We need to keep fighting to make sure that budget reflects priorities of working people, and that includes protecting crucial programs like schools, infrastructure, Medi-Cal (Medicaid) and Medicare. We need you to join with us to take this fight to the next level!