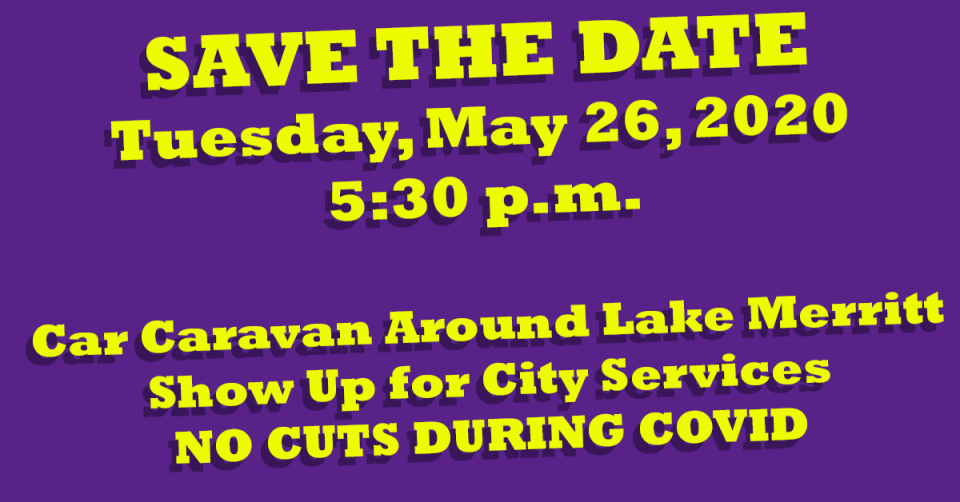 This week has mostly been more of the same from the City of Oakland. They have implemented plans that hurt workers without planning or meeting with the workers in advance, they have engaged in dishonest budgeting that seems more interested in hiding money than using it, and they abruptly cancelled a City Council meeting where important votes were scheduled to deal with the pandemic and appoint the new City Administrator.

Please Join Us to Show the City That We Are United
Tuesday, May 16
5:30 p.m.
Car Caravan Around Lake Merritt

You will be hearing a lot more about this upcoming action in the future, but I am excited about this event, so I want to share it with everyone.

On Tuesday May 26th starting at 5:30 p.m., your union, along with our City of Oakland labor allies and community groups, will be holding a Car Caravan around Lake Merritt to demand that the City protect vital services and the workers who provide them during and after the coronavirus pandemic.

We decided to plan this action because we are fed up with a City administration and Mayor who care more about what the City of Oakland looks like from the outside than on the inside, and who care more about Wall Street bond ratings than potholes on MacArthur Boulevard or sewers under East 14th Street or any of the other services we provide.

During the Great Recession of 2008 to 2012, we sacrificed to keep the City of Oakland running. I was here and I remember years of furloughs, increased retirement contributions, and no wage increases. The City of Oakland survived because the workers love this town and were willing to make sacrifices.

We were told that when the economy picked up again, the City would make up for the pain of the recession. We all know that never happened. From 2012 to 2020, the City fought us over every wage increase, telling us that the responsible thing to do was to put money into reserves so in the next downturn, the City would have enough in rainy day funds to protect City services and workers. As a result, we saw the cost of living skyrocket and our wages not keep pace while the City put millions and millions into reserves, and manipulated budget projections to cry poor when we demanded more services for our communities.

Now we face a once-in-a-lifetime pandemic that has killed over 60,000 Americans and shut down the economy, and the City is only even considering using $15 million of their total $63 million reserves. In fact, the City won’t even admit that $48 million even exists.

The City built up rainy-day funds on the backs of workers and at the expense of city services, and now they have the nerve to tell us that it’s not raining hard enough to use the funds. If this doesn’t qualify, I challenge the City to tell me what crisis is bad enough.

We are having this action on May 26th to demand that the City commit to protecting services and workers and that they work honestly and collaboratively with the unions and the community to prioritize city services and the city workers who provide them during and after this pandemic.

I hope to see you at the Lake.

Despite repeated demands from SEIU 1021, the City of Oakland ended ADO on Monday May 5th for all City workers. This impacted two groups:

The first group was instructed to return to their normal 40-hour schedules, while the second group was forced to use their own accruals while they work through the City’s Disaster Service Work (DSW) system. Last week we had heard that 449 workers were on 100% ADO at the City, and on Tuesday this week, our field representative learned from management that only 99 had effectively applied for DSW work. Based on these numbers, 350 City workers are currently being forced to use their own accruals because the City will not provide them work and place them on ADO until work is found.

We want to hear from you on this important issue. Please email Julio.Corral@seiu1021.org or Karen.Williams@seiu1021.org if:

I am asking our members to help us gather this information because the City has completely failed to provide adequate and timely information to these important questions. These are the exact topics management is obligated to meet with the union about prior to implementing. I am left to believe that the City denies this information on purpose in order to force City workers to use their own accruals to save the City money.

We are  continuing to fight this and we hope to get workers’ accrual balances restored for any time they have had to use. We also continue to pressure management to come to the table to negotiate over these policies.  We demand that the City find work for all workers who want to work and are able, and continue to provide ADO for workers while they wait for an assignment. The City needs to aggressively identify DSW opportunities for all “non-essential” workers and for all laid-off TPT workers.

On Monday, the City held a special finance committee meeting on the budget and the impacts of COVID-19. Prior to the meeting, Councilmember Lynette McElhaney reached out to SEIU 1021 and IFPTE 21 inviting us to participate as panelists. Basically, this just meant that we were able to talk for a little longer than normally under public comment rules.

I spoke to call on City administration to use both main reserves. This is a once-in-a-lifetime crisis, not a time to try to balance the City’s budget on the backs of workers who have given so much in the past.

Asking for concessions from City workers should be the very last option. There are many other cost-savings measures that should be done before concessions are even an option. We have never been made whole after the 2008 recession and many of us have never gotten back what we lost during the downturn.

I want you all to remember that all of the work we do and all the services we provide are critical to the health and well-being of our city.

In the meeting, Finance Director Adam Benson laid out several options for how to balance the budget considering the deficit anticipated by COVID-19’s impacts. His options included service reductions, furloughs, suspending OPEB payments, delaying contracts, layoffs, renegotiating schedule raises, and many other things. The union is reviewing the presentation so we can follow up with the City on many of the vague ideas and claims they made. Many of their “options” did not have costs associated with them, once again demonstrating either a lack of preparedness or a lack of transparency from the City administration.

What stood out most was what Adam Benson didn’t mention. The City has two reserve funds. The first, known at the Vital Services Stabilization Fund (VSSF) has $15 million in it, and gets its money from excess real estate transfer tax (RETT) revenues. When a large building is sold in Oakland, the City takes taxes from that sale. For large office buildings, this can be in the millions. The second is called the economic contingency fund. This fund is made up of unspent general fund revenues, what is left over when the City has a good year economically.

Anyone who has been involved in bargaining knows that every year the City underestimates revenue and overestimates expenditures. That crafty budgeting results in millions of dollars in surplus every year that the City puts into this fund. The economic contingency fund currently has $48 million. In talking about the reserves funds the City can use to protect vital city services and workers, Adam Benson only talked about the $15 million in the VSSF. He acts like the $48 million simply does not exist. The City seems like it is planning to demand concessions from workers and cut public services while hoarding 48 million dollars.

If this pandemic doesn’t justify using all available reserve funds, I can’t imagine what would. We must demand the City prioritize city services and city workers.