Throw Back to the 16th Century, Professors March on the NDNU President and Hand Her a 30 ft. Petition 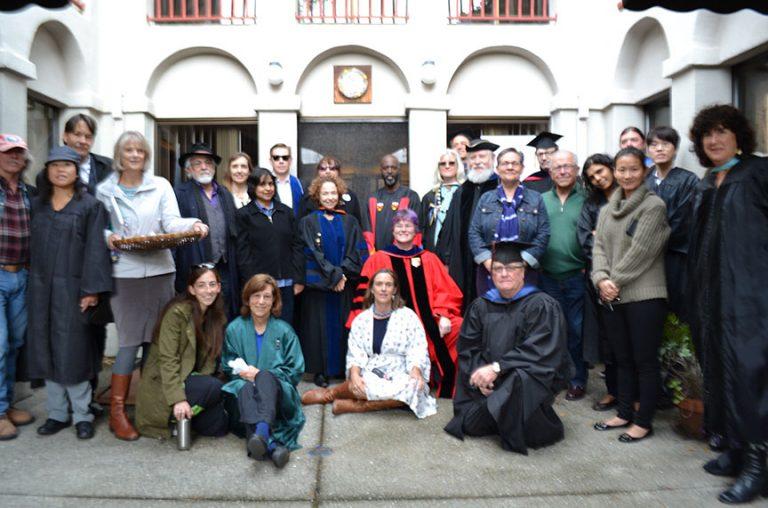 “We are a Catholic university and we chose to wear robes at this action because this is the 500th anniversary of Martin Luther, the protestant reformer, who carried a petition and pounded it on the door of the [Roman Catholic] Church. This sparked a counter reformation—a response from the church that resulted in positive change,” said Kim Tolley, faculty senate president and director of NDNU’s Master of Arts in Education program. “We thought we’d mark Luther’s moment by processioning with a long petition.  Initially we were going to tape it to the president’s door, but she was there so we handed it to her in-person.

This fall, students and faculty returned to campus surprised to learn that the university will no longer offer majors in philosophy, theater arts or master’s degrees in English, musical performance and systems management. Minors in French, dance and theater arts as well as certifications in clinical gerontology will be cut.

“Students who are in those programs are upset and grieving to know their programs will be taught out,” said Tolley. “Faculty who are watching the enrollment numbers can see that students have applied to those programs and now are being turned away. We are losing enrollments. We are concerned about this because, right now, NDNU’s enrollments are declining anyway. We see this as a disastrous financial situation to be in.”

Students and faculty members have joined forces to launch a public and campus-wide campaign to rescind the cuts. As the cuts continue to be protested, administration has given professors a “teach out” schedule, and students will have the bare minimum of time to finish their degrees.

“We hope that the president will be willing to hear the appeals of everyone who has programs that have been cut and that she will reconsider. We hope she would look at the economic data, and look at how these decisions have been hurting enrollment,” said Tolley.