Standing with Gig Workers in the Fight Against Uber and Lyft 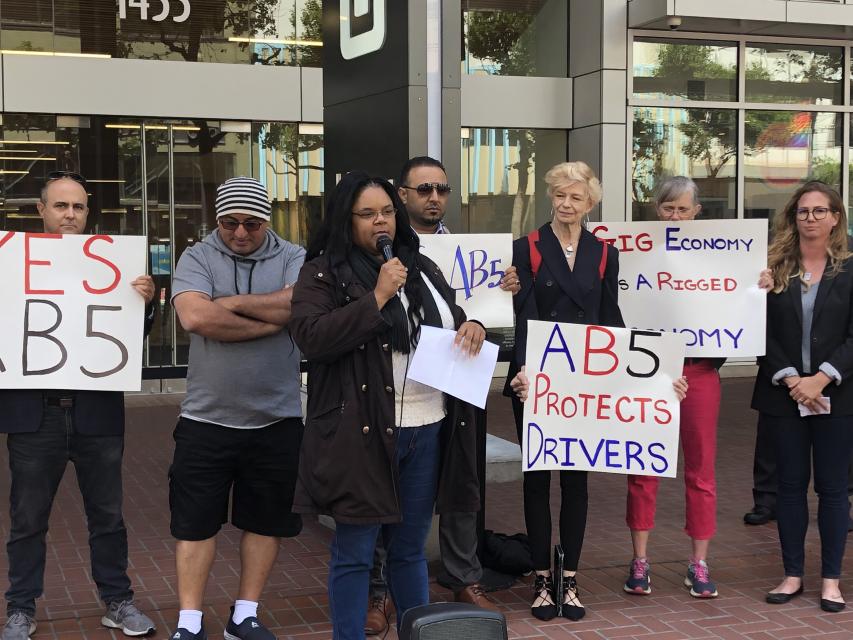 Uber and Lyft are trying to pressure drivers into opposing Assembly Bill 5 (AB 5), a piece of legislation that would expand rights and protections for drivers in California. Starting last Friday, the billion-dollar companies launched emails to try to trick drivers to sign a misleading petition so they don’t have to treat drivers fairly.

Uber and Lyft are scared of working people standing together, so they’re trying to mislead us into believing that the passage of AB 5 would rob drivers and other gig workers of the flexibility in their work schedules. Drivers aren’t falling for it and have organized to fight back against Uber and Lyft’s efforts to co-opt their voice. Earlier today drivers, joined by community allies, held a press conference in front of Uber’s headquarters in San Francisco.

“Drivers deserve their own voice, and we can speak for ourselves,” said Rebecca, an Uber driver who opened up the press conference. “We’re here to let them know that we won’t be swayed by their scare tactics.”

Nicole Christian, an SEIU 1021 member leader and SFMTA worker, expressed our union’s support for gig drivers who are standing up to the tech giants, “Your message here is so important: money and technology and threats can never replace the real voice of workers. And it is because you have been using your voice that the CEOs have started to change their tune.

“These CEOs and other powerful and wealthy people in their companies have come to believe that they are the masters of the universe, but you have shown them your power by using your voices – to demand justice and fairness. We are proud to stand shoulder to shoulder with you as you lead this important fight to change the “gig economy” model of exploitation,” she continued.

We are supporting AB 5 because drivers–like all workers–deserve a minimum wage, benefits, and all the protections provided by California’s laws, including a real voice on the job and the power to bargain for pay and rights at work.