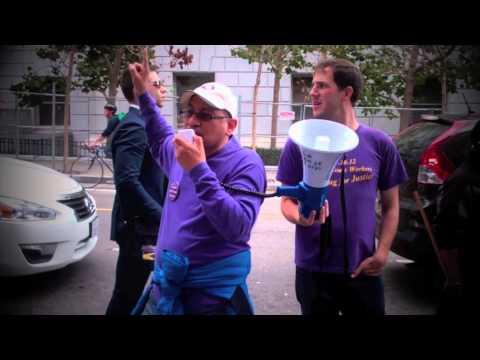 Picket lines went up at all three of the San Francisco court sites — the Civic Center Courthouse (CCC), the Hall of Justice (HoJ) and the Juvenile Justice Center(JJC) — at 6:30 am. As workers arrived in the morning, they were greeted by chanting people in purple. Even court reporters and court interpreters, members of other unions, joined the line.

Chief Shop Steward Gary Feliciano emphasized that this was a ULP strike because management had so blatantly broken labor law in negotiations.

“We are very disappointed that the San Francisco Superior Court, the institution we are devoting our careers to, the institution that should be the beacon of justice in our community, would show such disregard for the rights of others. The judiciary is not above the law,” Feliciano said. “We are taking this strike action today to hold them accountable, and to publicize to everyone in the City this Court’s outlaw behavior.”

The noon rally at CCCC showcased SEIU 1021 members from all over Civic Center, from City Hall, the Main Library, the PUC, the Museum, the Health Services Agency and more. A delegation of AFSCME Local 3299 from UC Hastings Law School a block away, who are in their own contract struggle, came by in a show of solidarity. SEIU 1021-endorsed candidate for San Francisco District 10, Supervisor Tony Kelly, made a guest appearance in support of the court workers as well.

In an important first for court worker solidarity, the court interpreters of the California Federation of Interpreters-Communications Workers of America nearly unanimously respected the SEIU 1021 picket line and joined it. Two of their members spoke at the noon rallies, Northern California field representative Anabelle Garay at the HoJ and Spanish interpreter Shannon Raintree at CCC. Almost all court reporters, members of IFPTE Local 21, also stayed out, many joining the line.

The interpreters and reporters took advantage of a recent PERB ruling allowing them to not cross the picket line without employer retaliation. That was the result of a challenge of the City and County of San Francisco’s Charter provision prohibiting sympathy strikes by city employees. SEIU 1021 contended state labor law supersedes that the provision. The PERB agreed, and demanded the City remove that language from the Charter, clearing the way for intra-city union solidarity.

The noise, the silence

Pickets covered all entrances at the CCC and the HoJ. The pickets at the front of the CCC were so loud that whenever a sheriff would open a door, the noise reverberated through the entire building.

The strike shut down most court operations. All the windows where papers are filed and fines and fees collected were closed. “The place is like a church on Saturday,” one court reporter said.

The effectiveness of the strike so rattled Court Executive Officer Michael Yuen that he appeared to be losing it. First, when a union delegation went into the building to deliver the official notice that workers would return to the job the next day, he commanded his staff not to allow any strikers in the building even though he knows he can’t ban people from a public building.

After that Yuen called his own press conference where he branded the strikers “a group of rouge unionized employees.” He went on to say the strike was illegal and threatened to file a ULP against the union for walking out when there is a no-strike clause in the contract. Those statements were silly lies since he knows a ULP strike is legal even while a contract is in place. He doubled down on that claiming nearly half the courtrooms were still operating, something any reporter who bothered to look could see wasn’t true.

The court workers are in the last year of a three-year contract. The employer flatly told them that they weren’t going to give them any of the $16 million surplus they were required by law to spend. To the union’s wage proposals they simply said “no” and pretended they were making a counter offer when they responded with an “offer” of no raise at all.

The union responded by filing a ULP charge of bargaining in bad faith, alleging withholding of information, never really negotiating and making threats to its members’ jobs. As much as they were disgusted by the Court’s not offering any part of the surplus, they were disgusted more by the way the Court callously spent the full $16 million without restoring a single service cut during the last five years of budget deficits.

“We are here on the picket line because Michel Yuen won’t consider restoring five years of cut court public services cuts and he won’t consider making us — the lowest paid court employees — whole after years of layoffs, furloughs and wage cuts,” said Beto Gonzalez, a clerk in the Jury Dept. of the Hall of Justice.