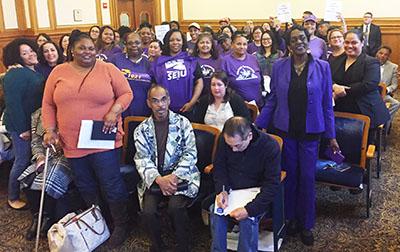 In March of this year the U.S. Department of Housing and Urban Development (HUD) directed the City of San Francisco take over the long-embattled SF Housing Authority. HUD instructed the agency to develop a plan to relinquish all of the agency’s operations and programs. The Housing Choice Voucher Program and the Long-Term Lease Program were the last 2 remaining programs administered by 90 members of SEIU 1021.

Members at the agency received layoff notices, and days later they went into action to fight for a fair separation agreement.

After months of actions, workers reached a deal with the SF Mayor’s Office to transition them into city jobs, or receive a severance package.

“The city has set aside, as of now, 76 jobs for Housing Authority employees and continues to work on finding more jobs that match workers skills and qualifications. And workers who get laid off will receive a severance package of two weeks of pay for every year of service—up to 40 weeks,” said Theresa Rutherford, San Francisco Vice President.

As part of the deal, the Mayor’s office agreed to place a measure on next year’s ballot to help housing authority workers keep their retiree medical benefits that they would otherwise lose through the privatization of the agency.

“SEIU is very proud of our members at the Housing Authority and the dedicated service that they delivered to the people that they served. We were honored to help them to fight back against the devastation of job loss. We are happy that the mayor heeded the call and did the right thing by committing to training these workers and ensuring that they would transition into city jobs,” said Rutherford.