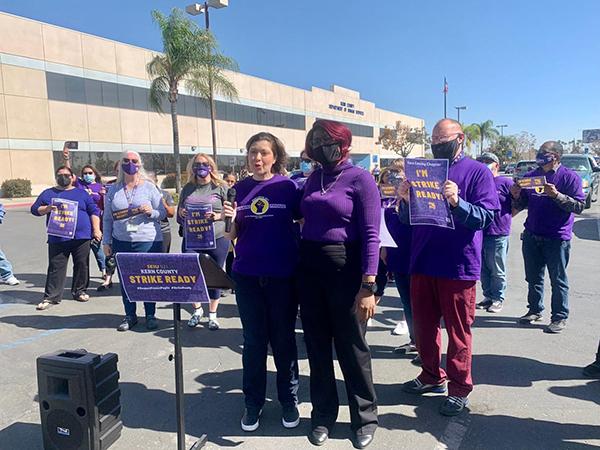 October 18, 2021: In a month gaining significant press coverage as “Striketober,” SEIU Local 521 members employed by Kern County are the latest to join over 100,000 working people in the U.S. who have authorized a strike in their workplace. Kern County 521 members voted overwhelmingly–by 91 percent–to allow their bargaining team to prepare for an unfair labor practice (ULP) strike after over two years of fruitless negotiations with Kern County. In authorizing the strike, union members also voted down a “last, best, and final offer” that would lock county workers out of raises for years to come and renege on wage increases some were promised when they were hired.

Inadequate pay and a lack of a cost-of-living adjustment (COLA) since 2013 have contributed to critical short-staffing across the county’s workforce even amid outsized need during the pandemic: One in three positions in the public health department is vacant, as are one in four positions in the public defender’s office, one in five in human services, and nearly half in animal services, just to name a few. The short-staffing puts more work on the workers who remain–fueling burnout and, in conjunction with pay that hasn’t kept up with the cost of living, creating a vicious circle of high turnover, as workers seek better options. Indeed, 43 percent of county employees have been there less than five years.

“We do not want to strike, but the county’s unfair labor practices and legal tactics have forced us to prepare for the worst,” explained 521 Kern County Vice-President Tiffany Sagbohan at a press conference last Friday announcing the strike authorization vote results. “County management and the board of supervisors have the ability to avert a work stoppage by immediately putting an end to the unfair labor practices and returning to the table for a resolution. Our message to the community is that we have seen the hardships you have faced through the pandemic and we know you are not receiving the care you deserve and in many cases depend on to survive. Our fight is about protecting you and protecting the future of this county.”

The strong showing of support for a strike is notable in one of California’s more conservative counties, where hostility to unions tends to run high. 521 members were joined by labor icon Dolores Huerta, who at Friday’s press conference pledged to back county employees if they ultimately must go on strike. “If they have to do a work stoppage, in my personal capacity I will do everything I can do to rally support for them. They are out there keeping my county’s residents safe and healthy,” she said.

Needless to say, SEIU Local 1021 stands firmly in solidarity with SEIU 521 members as they pull out all the stops to make working for Kern County a family-sustaining career workers can retire from, attractive enough to fill the countless vacant positions to make sure that county residents get the care and services they need and deserve.