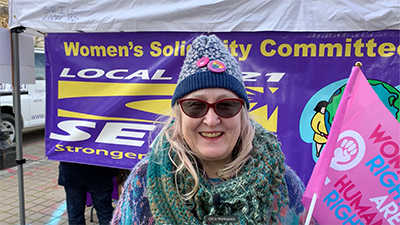 On January 18, hundreds of thousands of women and allies hit the streets across the United States and the world. The 2020 Women’s March a women-led movement providing intersectional education on a diverse range of issues and creating entry points for new grassroots activists and organizers.

Speaking at the Tri-County Women’s March in Walnut Creek, SEIU 1021 Vice President of Organizing and San Francisco Department of Public Health RN Jennifer Esteen said, “Let’s remember that no matter how we present, whether we have X or Y chromosomes, we’re all people…all of us—women, boys, trans men, our nonbinary allies—we have to stand up for women, girls, and trans women. Whether they are our daughters, our sisters, friends, mothers, or even strangers walking down the street.”

Jennifer went on to make a call to action, saying, “So I offer everyone here today a challenge. It’s time to step up and show up to make change…the opportunity to step up presents itself all the time: when you witness acts that are misogynist, homophobic, or racist. When you witness microaggressions or blatant acts of disrespect, reject it. Say no to it. Speak up and say enough is enough.”

You can watch Jennifer’s full remarks at https://youtu.be/nl1C9Nya98g.

The mission of the Women’s March aligns closely with that of SEIU 1021; to unify and empower everyone who stands for human rights, civil liberties, and social justice for all, and to harness the political power of diverse women and their communities to create transformative social change.

“Women’s March is an exciting way to do activism and promote the visibility of the different campaigns that affect women and other people in the community. That’s why the Lavender Caucus and labor is here to represent—because we support women, women’s rights, the right to healthcare, the right to choose, and to protect transgender women of color. There are just so many things we have to keep fighting for, because freedom is a constant struggle,”said Sally Buchmann, an SEIU 1021 retiree from San Francisco General Hospital and co-chair of the SEIU 1021 Lavender Caucus.