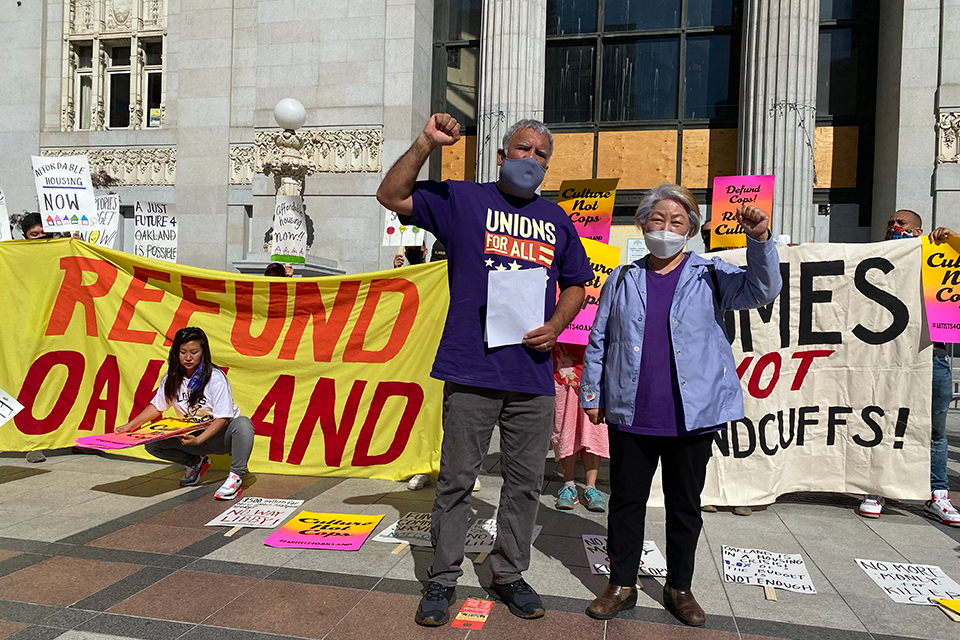 As Oakland’s City Council continues to work towards passing a balanced budget, SEIU 1021 members and other members of the community keep the pressure on.  The City’s Refund Coalition, a group that includes SEIU 1021 and other labor organizations along with many community groups, has been tireless in its advocacy for a budget that prioritizes the things Oaklanders really care about: investing in housing as a human right; public safety and public services; protections for frontline workers; and arts and culture funding. All of this is to be funded by holding wealthy companies accountable, so they pay their fair share. To support the coalition, 1021 members showed up and spoke out at a press conference and rally at City Hall last Friday, June 17th.

Yeon Park, an Alameda County healthcare worker and SEIU 1021 East Bay Vice President, joined the rally to say, “We need the City to reinvest and restore art and culture programs, and in the crucial City services that residents of Oakland deserve. We need the City to invest in housing the thousands of homeless on our streets, who right now are living in inhumane and substandard conditions. We need the City to invest in the public safety programs that actually keep us safe, especially mental health response programs like MACRO, youth jobs, and violence prevention programs. This will create sustainable, equitable union jobs that will both serve the community and help reinvest in it by fighting displacement.”

Following the rally, City Council met to discuss the budget, which must be passed by June 30. Both the Sing Tau Daily and People’s World covered the event.