Secure Choice Board hearings pit big business against … everyone 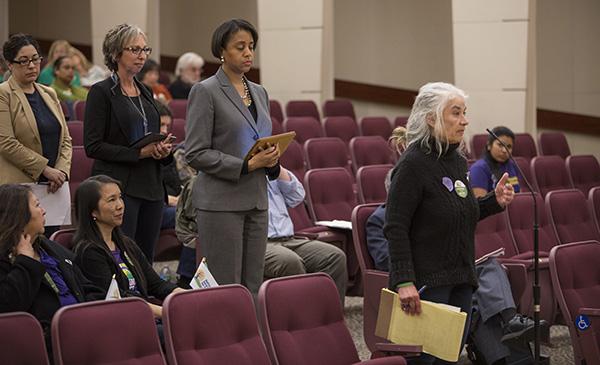 With the fate of millions of California seniors, now and into the next few decades, hanging in the balance, a state board heard hours of testimony March 1 and 3 before having to gather the political will and decide how – or even whether – to build new paths to retirement with dignity

Against the united opposition of business, scores of workers, labor leaders, retirement experts and youth and community advocates pitched to the head and heart for a new state-sponsored retirement program that would provide a modest hedge against grinding poverty for those in their golden years and protect them from losing their hard-earned savings in the type of wild market fluctuations that hit the financial markets in recent months.

Meant as a supplement to Social Security, it was designed for employees who don’t have access to any other employer-based retirement plan (pension, 401(k), etc.). Employers with five or more employees would enroll them in the Secure Choice Savings program where they would contribute from their post-tax pay into the savings plan. The plan would be portable so it could follow workers when they change jobs.

The need for some response was highlighted in a report released late last year by University of British Columbia and University of California at Berkeley researchers. Their “Aging California’s Retirement Crisis: State and Local Indicators,” found:

For the last three years this “Secure Choice Board” – composed of financial planners, retirement experts, labor leaders with expertise in retirement issues, and attorneys appointed by the Governor and legislators, and assisted by economic consultants – has been studying different financial models to make the plan work.

Now as the deadline approaches to complete its recommendation and submit it to the legislature and Governor for action, public hearings – one in Los Angeles and one in Oakland – were held to get input on the final version.

The board had narrowed the options for the vehicle for the savings plan to two. The first option, “Target Date Funds,” would be individual IRA-type accounts whose investments would be divided between stocks and bonds in proportions determined by the participant’s age. Younger participants would have a larger share of their investments put into higher risk, higher potential return stocks and less in lower risk, lower return bonds. As the participant ages and approaches retirement, the proportions would gradually shift to a higher proportion of bonds versus stocks.

The second option is a “Pooled IRA with a Reserve Fund.” Here individual contributions would be pooled together, reducing complexity and administrative costs long term, and a reserve fund would be created (using some of the first few years’ investments) to help smooth out market losses and reduce risks.

At the Oakland hearing the witnesses lined up at the mic to tell their stories for more than two hours. The single mother working at a fast food restaurant living paycheck to paycheck and fearing following in the path of her mother who is approaching retirement age with no options, the young woman who has watched her parents work all their lives with nothing to show, the older man forced onto disability because of a body wrecked by hard work and hoping the program could help his daughter, the woman in her 70s who is looking at having to work till she dies, the mother who has spent most of her working life taking care of her disabled son and doesn’t even qualify for Social Security, a retired mother who has a good pension but sees that possibility escaping her children.

Everyone who expressed a preference opted for the pooled IRA with the reserve fund, noting that with their limited resources and savings they needed the more stable plan.

During the testimony the board’s chair, California State Treasurer John Chiang, occasionally asked witnesses clarifying questions whose answers drew out the heartbreak in their stories. One board member could be seen wiping away tears as she listened.

As the line began reaching its end, the well-coiffed suits from the California Chamber of Commerce, the California Manufacturers and Technology Association, the Securities Industry and Financial Markets Association, and the California Life and Health Insurance Guarantee Association made their way to the mic. In that auditorium at that time they couldn’t possibly oppose some form of retirement security. They didn’t even say which of the funding options they preferred.

Instead they argued that this program was too important not to get it right the first time, and rolled out the “what ifs.” What if the enrollment numbers didn’t pan out as projected? What if the rules around retirement savings change? What if employers’ costs are higher than anticipated? We need to take more time to study all the questions we have.

Bill Sokol, a board member and union attorney who sits on several pension boards, responded. “You have posed interesting questions, but no answers. Give us your answers, not just 42 questions for us to answer,” he said. “This is what we used to call paralysis by analysis.”

Jesse Hunter, an SEIU 1021 member, approached the mic. “If the Chamber of Commerce and other employers were concerned, they should have done something before getting rid of pensions,” he said.

The Secure Choice board will meet again Monday, March 28 in Sacramento to make the final decisions on its recommendation to the legislation.