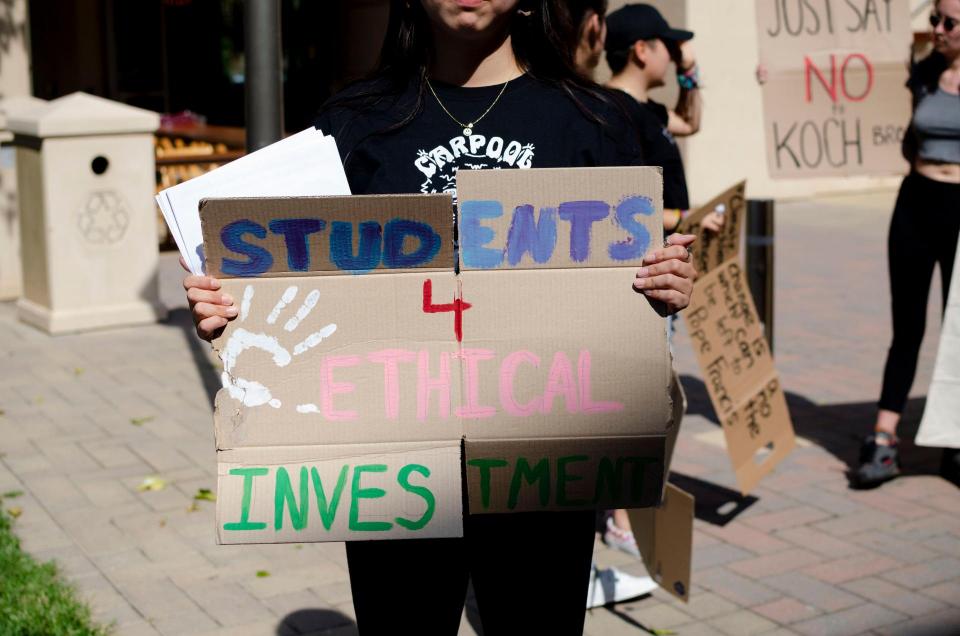 ​As Santa Clara University’s new president Father O’Brien was inaugurated, students engaged in a silent protest action against the University abandoning its mission and not upholding its Jesuit values. Their banner and signs reference the University’s refusal to let faculty have a vote on unionization, its continued investment in fossil fuels in the midst of a climate crisis, and acceptance of $4 million from the notorious Charles Koch foundation. Protesters wore sunglasses and hats in an attempt to avoid identification and let the administration know that they are fearful of speaking out against the University. This action happened after months, and in some cases years, of circulating petitions, sending mass emails, engaging in face to face meetings with administrators, and other actions asking for change in the University’s policies and practices but to no avail.

“In the beginning of his new presidency, Father O’Brien has the opportunity to create real change at Santa Clara toward environmental justice and ensuring that the voices of all students, faculty, and staff are heard,” says Adri Moses, a third-year at SCU participating in the protest. “However, in choosing to maintain the status quo of our university investing in fossil fuels and accepting donations from the Koch family he has chosen to leave behind these Jesuit values​”.

Students have expressed solidarity with faculty many times through letters and actions as Trump’s anti-worker National Labor Relations Board has endangered the customary path to unionization for adjunct faculty and graduate students, and the University has refused to let faculty conduct an in-house vote on unionization. ​ There have also been years of student organizing and activism to push the school to divest from fossil fuels, an effort that has been shut down by administrators in the past. Toward the end of last year, the school also announced its acceptance of $4mn from the Charles Koch Foundation, and over 1,000 students, staff, faculty, and alumni promptly signed a letter demanding the incoming University president to acknowledge the harm in the acceptance and implications of the money. Students have sent him hundreds of still unacknowledged emails, and in August, two student organizers met directly with administrators to express their frustration and demand that the University cut all ties with the Koch name. To many students, staff, and faculty, the University is abandoning its social justice mission and refusing to act in accordance with its Jesuit values.

“We should be doing everything in our power to be doing good in the world in the face of the impending climate crisis,” said Sophia Smith, also a third-year at SCU. “Yet we are accepting money from, and therefore condoning and enabling, one of the most powerful inhibitors of social and environmental justice.”

“We are proud of the efforts taken by these courageous students,” said Jasmine Banks, Executive Director of UnKoch My Campus. “The Koch network’s policy agenda is oppressive and anti-democratic, and we’re excited to support young people who are refusing to allow their schools to legitimize donor habits that destroy academic freedom.”