Santa Clara University Faculty and Allies Rally Outside the Golden Circle Fundraiser to say “Let Us Unionize. Let us Vote!” 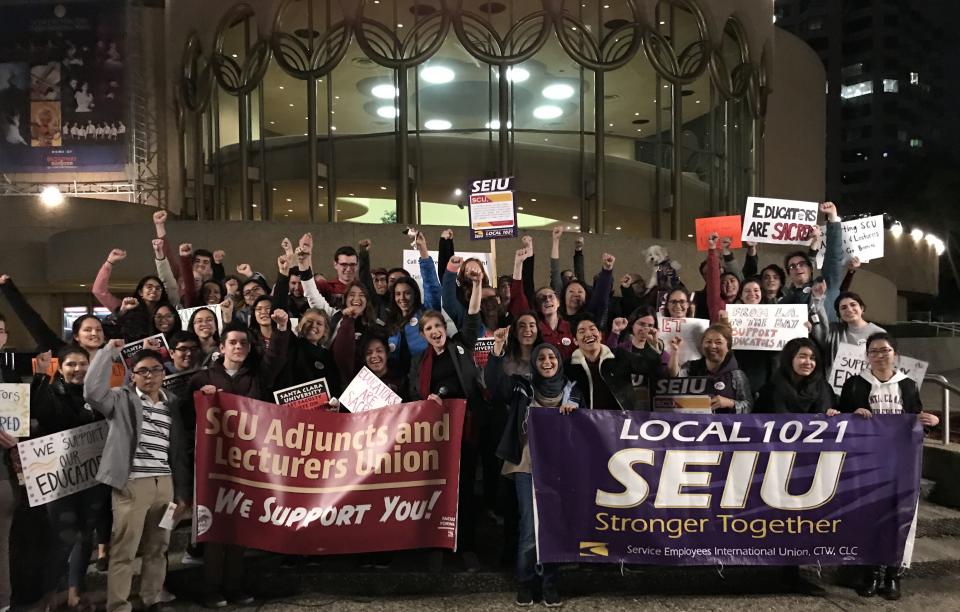 On January 19, 2019 at the San Jose Center for Performing Arts,more than 100 faculty, students and community supporters were outside the black-tie Golden Circle fundraiser in support of SCU adjuncts and lecturers voting on whether or not to join together in a union. On the day when women marched around the Bay Area to support women’s rights, social and economic justice, and workers’ rights, SCU adjuncts, lecturers and supporters highlighted how denying a vote on unionization denies an expanding class of contingent workers (predominantly women) a voice for improved working conditions and a living wage.

Adjunct faculty and lecturers make up more than half of all faculty at Santa Clara, and teach more classes and mentor more students than any other group. The adjuncts and lecturers’ salary puts them, according to a 2017 report by US Department of Housing and Urban Development, below the ‘very low income’ limit for Santa Clara County.

“A union will give us—adjunct faculty and lecturers—a meaningful voice at the bargaining table. We believe that holding this vote in-house would allow the university to live up to its Jesuit values. Granting adjunct faculty and lecturers this opportunity would demonstrate that SCU treats our voices with respect, which a lack of response to this reasonable call for a vote denies,” Madeline Cronin, Academic Year Adjunct Lecturer, Department of Philosophy.

After hundreds of petition signatures and letters of support from students, alumni, faculty, community organizations, and elected officials—including Santa Clara University (SCU) alumnus Gov. Gavin Newsom—calling for a fair process for adjuncts and lecturers to vote on unionization, the SCU administration is actively ignoring the will of the Santa Clara community.

Tensions mounted at the Jesuit university last summer when the president of Santa Clara University announced he would be stepping down amidst calls to stop hiding behind the Trump labor board and allow faculty to vote on whether to form a union. The traditional path to unionization through the Trump Administration’s National Labor Relations Board recently has come under scrutiny for obstructing workers’ rights to unionize. SCU faculty strongly believe that a neutral party, in-house vote on unionization is the only way.

“The potential for a unionized lecturer/adjunct teaching force to contribute more effectively to decision-making processes that lead to equitable and system-wide improvement is great.  We see both a better climate for student learning and faculty sustainability improving with unionization. Many lecturers and adjunct faculty members are afraid to voice their concerns about their real workplace challenges, which proves that it’s time for a cohesive, communal approach,” Mary Long, Lecturer, Department of Math and Computer Science.