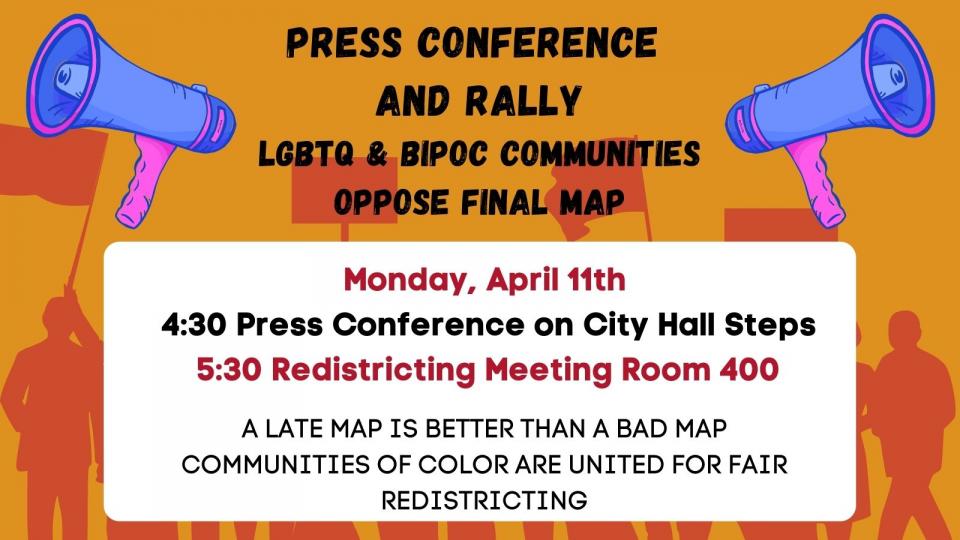 Right now, San Francisco’s millionaires are working hard to hijack our city’s redistricting process to undermine the vote and voice of San Francisco’s union workers, communities of color, immigrant and monolingual residents, as well as the most marginalized in our communities and those at greatest risk of displacement.

This is an all-hands-on-deck emergency and the outcome will impact our elections, negotiations, and funding for our jobs and services for the next decade.

Right now, San Francisco’s millionaires are working hard to hijack our city’s redistricting process. They want to undermine the vote and voice of San Francisco’s union workers, communities of color, immigrant and monolingual residents, as well as the most marginalized in our communities and those at greatest risk of displacement.

Our city’s elites want to redraw our electoral maps to seize control of our city’s government and its $13 billion budget to serve their own interests rather than those of the working people who keep San Francisco running. If they succeed, we could be left with a Board of Supervisors who is less willing to support union workers or vote to invest in and fund the crucial services we provide.

This is an all-hands-on-deck emergency.

Every 10 years, local governments redraw district lines to align with the most recent census so that every district has an equal voice, equal resources, and equal representation. This year, however, our city’s most elite, well-off residents want to subvert this process in an attempt to control the next decade of elections in San Francisco.

This is a fight for the heart, soul, and future of our city. The people elected to the Board of Supervisors often determine the funding for our jobs and services and have the final say in approving our union contracts.

On April 10, five members of the San Francisco Redistricting Task Force (RTF) voted to adopt a map that will split communities of interest and make it harder for union members, people of color, and vulnerable populations to make their voices heard in our city’s elections.

This shocking and shameful vote occurred after four members of the RTF walked out in protest around 2 AM on Sunday after meeting all day Saturday. The remaining five RTF members voted to pass the draft map anyway, and have faced increasing criticism for the lack of transparency and consensus. The map they adopted was referred to by one member of the Task Force who opposed it as a “class warfare map.”

We can’t allow San Francisco’s wealthiest residents to hijack our city’s redistricting process. We need more public accountability and meetings to give input before any map gets finalized. A late map is better than a bad one.