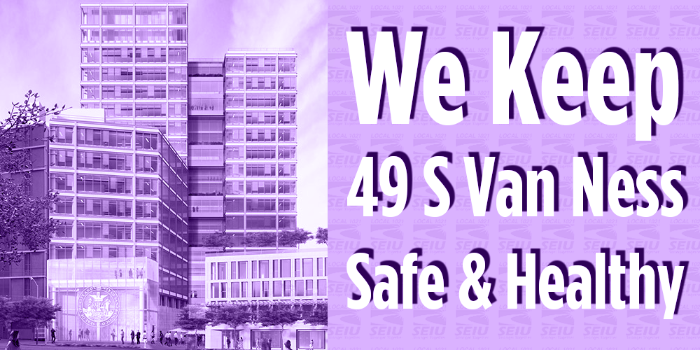 SEIU 1021 members at 49 S. Van Ness scored a partial victory this month in their fight against the proposed outsourcing of custodial and security jobs in the building. Members have been working hard to rally opposition to the plan which would see these union civil service positions traded for lower-paying and less stable contactor positions.

In a June 4 meeting, management finally backed off their plan somewhat, saying that custodial jobs would continue to be done by civil servants but that they wanted to proceed with subcontracting security services. While we’re happy to see some movement in the right direction on this issue, members remain committed to fighting against any outsourcing or subcontracting of either the custodial or security work being done at 49 S Van Ness.

Kenneth Li, a Custodial Supervisor, had the following to say:

“We as SEIU members came together for a cause—to fight to prevent the outsourcing of these jobs. All the custodial staff, including their families, signed the petition. We had over 600 signatures in total, including security guards.

We provide an emergency service. There were cases of employees in the building who tested positive for COVID-19, but our staff continued to suit up in coverall, goggles, disposable gloves, and masks to go to work and keep people safe. We use the latest technology like spraying disinfectant the way that airliners do using a rechargeable spray with electrostatic disinfectant that can stick to any surface to exterminate the virus within minutes. We are continuing to provide such services when asked to do so.

It was a victory for us to stop the outsourcing of these jobs. I hope the city will work with us and protect the jobs of our security workers as well.”