Not backing down on economic justice 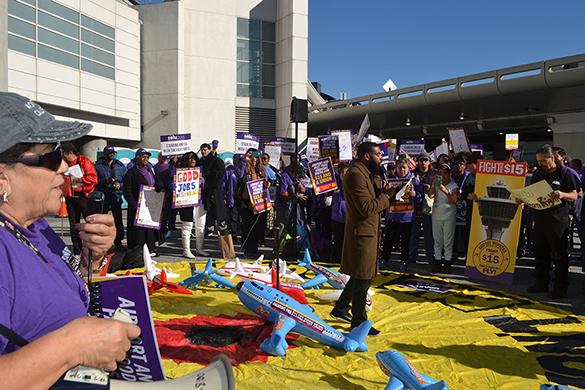 With a rallying cry of “Poverty Doesn’t Fly”, SEIU Local 1021 members joined hundreds of working people at San Francisco International Airport on November 29 to demand $15 an hour and union rights for all workers. The spirited rally saw SEIU members from Local 1021, USWW, and 2015, Uber drivers, and low-wage workers and immigrant justice activists banding together to call attention to the plight of the chronically-underpaid at a time when more and more wealth is being shifted to the richest in our economy.

Our presence at SFO was part of the Fight for $15 national day of action that saw rallies in more than 330 cities across the nation. The Fight for $15 is a labor-backed movement that began four years ago when fast food workers walked off their jobs in protest of wages that don’t pay for basic human needs. Since the Fight for $15 began its campaign of grassroots economic change, 22 million workers have seen their wages raised.

Local 1021 members who make less than $15 an hour–in jobs such as school cafeteria workers, bus drivers and adjunct professors–aren’t the only members who struggle when the wage floor is too low; whole communities suffer when underpaid workers have no purchasing power to contribute to the economy. That’s why we participated in the rally at SFO and will continue fighting to raise the minimum wage in order to hold corporations and the financial institutions that sustain them accountable to the common good.

The presidential election proved the economy has been taken over by corporations, capital and the wealthy, rigging the rules of employment, politics and government to their advantage and to take obscene profits. There will be future fights ahead and we will need all of our members to come out if we are going to level the playing field and create a just society where the economy works for everyone, not just the privileged few.

Myrna Spiegler, a retired 1021 member from Sonoma who came to the rally, challenged all her union brothers and sisters to join the progressive resistance whenever they have the opportunity.

“Read, make yourself knowledgeable about the issues, then get out in the streets and do it,” Spiegler said.