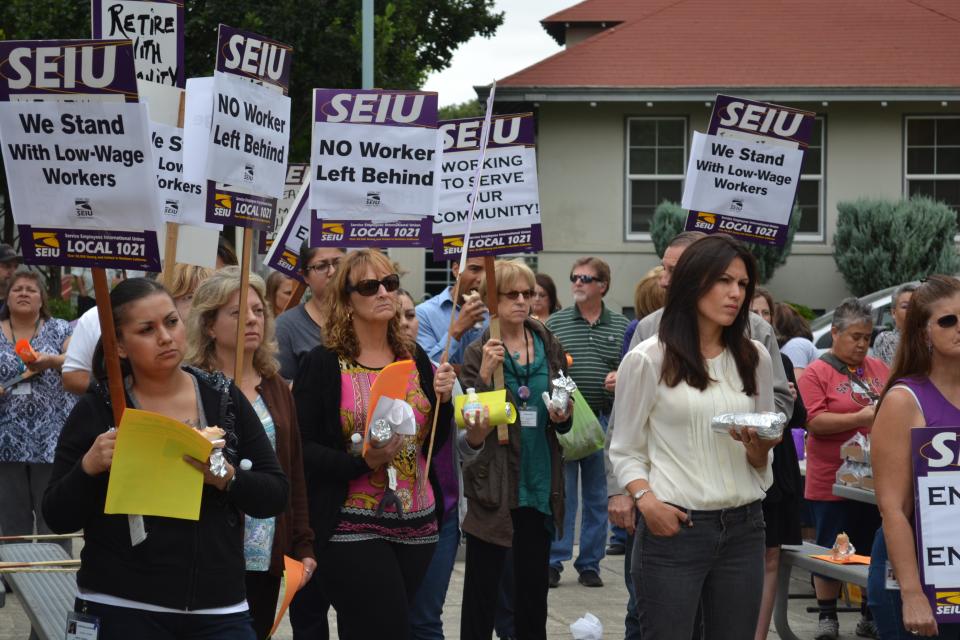 Napa County employees’ contract expired June 30. Though progress has been made in negotiations, health care remains a sticking point: Napa County is demanding that all County employees pay more for their health care, despite a 3% rate drop for Kaiser next year—a move that would hit the lowest-paid workers hardest.

“It is unacceptable for the County to ask those who have already fallen behind the cost of living to take another hit,” says Sabrina Bucklin, an HHS employee and President of the Napa chapter of SEIU Local 1021. “The Board of Supervisors should make sure health care is affordable for all County residents.”

Wednesday, August 20, Napa County workers held a rally outside the health clinic on the HHS campus and leafleted the public, asking them to call the Board of Supervisors and tell them to prioritize affordable health care for workers and the community.

Napa current provides very limited medical care for those who fall into the “health care gap”—those who do not have employer-provided insurance, do not qualify for state or federal programs, but cannot independently afford health care. Many counties in California offer public or publicly funded hospitals and primary care clinics to serve this population. Napa County employees will call on the Board of Supervisors on Wednesday to expand the health care services offered—a move that would ensure better and more affordable health care for low-income residents, and which would also bring jobs to the County.

Napa County is currently doing the bare minimum to comply with the new federal health care law. The County does not provide primary, ongoing care for those in the “health care gap,” even though adequate, consistent primary care yields much better outcomes. Hospital emergency rooms can turn away uninsured patients who are in stable condition, and do not provide routine care or treatment to uninsured people with chronic conditions like diabetes, asthma or cancer. They also bill uninsured patients, even if they are not admitted, which is the leading cause of personal bankruptcy in the U.S.

The current eligibility threshold for very basic, limited medical services is 133% of the federal poverty level, or $31,720 for a family of four, allowing many uninsured working families to fall through the cracks, and excludes undocumented residents—unlike many other counties.

The local economy is booming, the County has a surplus, revenues are up and property values are through the roof, but many have been left out of the economic recovery. One major problem is that when figuring in the cost of housing and health care, the practical poverty threshold in Napa County is considerably higher than in most places: $31,355 according to a study by Stanford/Public Policy Institute released last October—considerably more than the official $22,811 state poverty threshold, putting Napa’s poverty rate at 25.5%. That is more than twice the official poverty rate.

These numbers mean the difference between qualifying for services and programs that would help low-income working people make ends meet and letting them fall through the holes of a tattered safety net. In a county where, in 2013, 11% of homes sold for over $1 million, a family with an income in the low $30s will not qualify for most safety net programs or services. Yet one disaster—an accident or catastrophic illness, for example—often easily lands them in bankruptcy, foreclosure or even homelessness.

“Some of our coworkers have lost their homes,” says Bucklin. “To the Board of Supervisors, who make almost $7300 a month, these health care contributions may not seem like such a big deal. But to those of us trying to raise a family on $649 a week in one of the most expensive places in the country, it’s a lot. Some County workers can’t afford to lose a single dollar more out of their paycheck. And they shouldn’t have to. The County has a budget surplus and increased revenue. We won’t allow our lowest-paid workers to be attacked this way. The Board of Supervisors needs to understand the effects of income inequality in this County and keep health care affordable for its employees, as well as assist the rest of those in the community suffering from income inequality.”