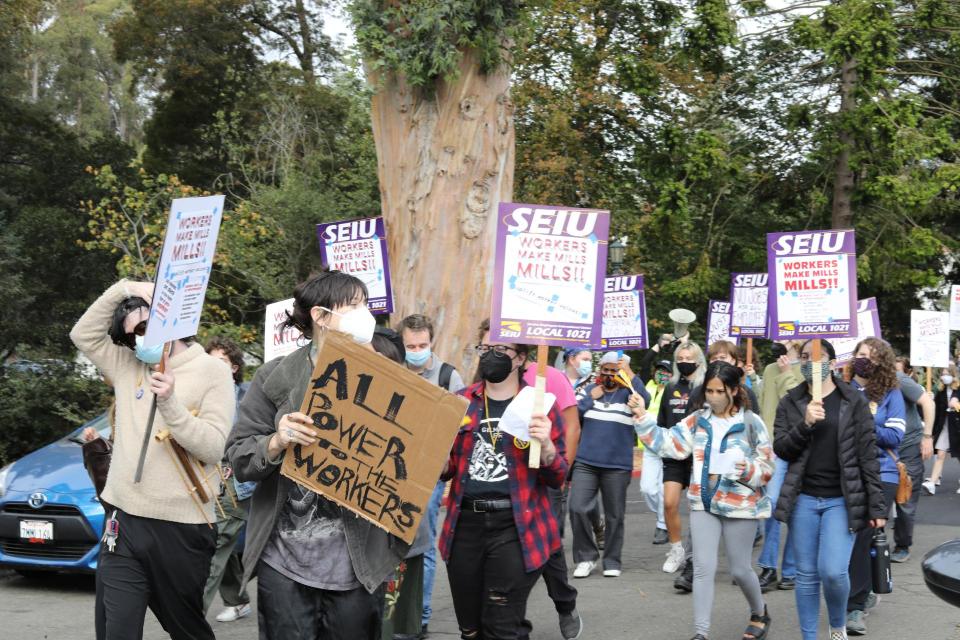 Over the past year, the future of the women’s college has been in doubt, leaving workers and students without any commitments in writing as to their future employment and education status, respectively. 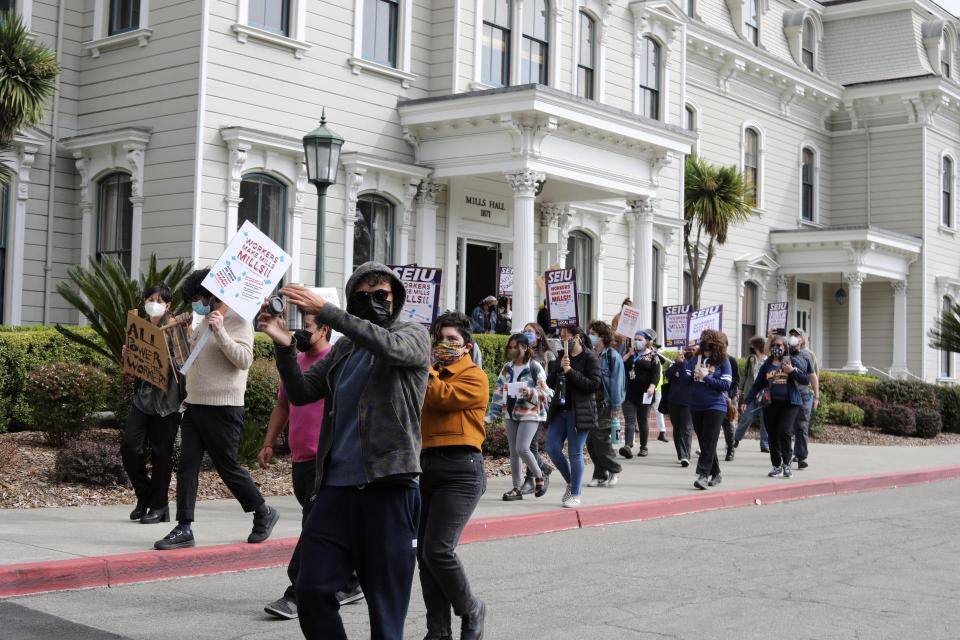 To win job security and living wages, staff at Mills College voted to form their union with SEIU 1021 in February of 2020. Nearly a year later, Elizabeth L. Hillman, the president of Mills College, announced that, due to the pandemic accelerating the college’s financial issues, Mills would transition into Mills Institute. That move would see Mills drop its status as a degree-granting college. However, over the Summer, the Mills administration changed course and announced its plans: be acquired by Northeastern University, the private research university based out of Boston, Massachusetts, to become “Mills College at Northeastern University.”

Throughout the entire process, the Mills administration has failed to meet with those who provide the experience that students seek and value: the staff union. 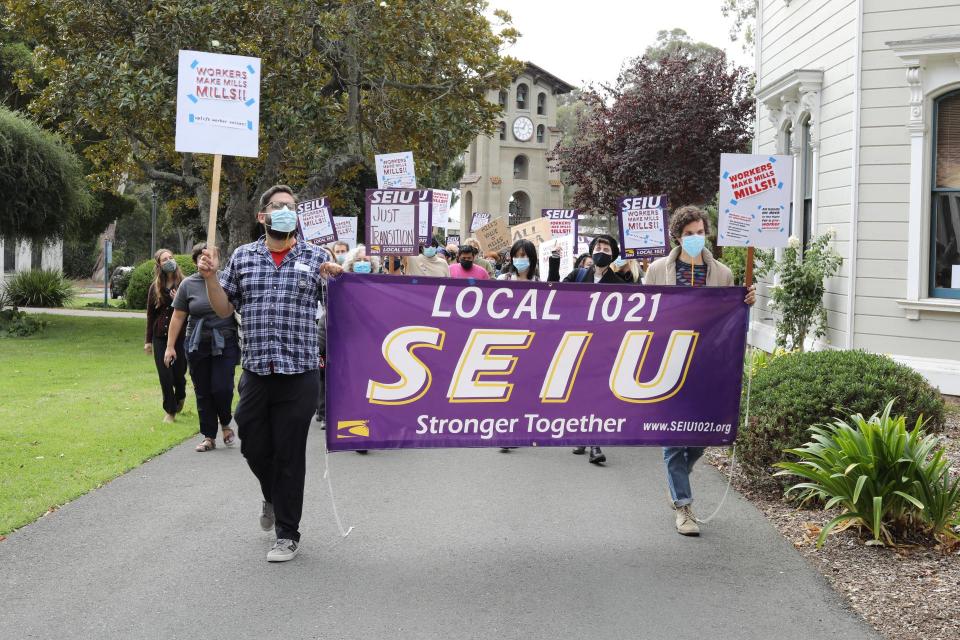 Vala Burnett, who has worked in various administrative positions at Mills College since 2005, spoke before the rally:

“Against the backdrop of the administration’s statements that they will preserve Mills’ unique character and support staff and faculty through the merger process, their actions—or inaction, more precisely—in contract negotiations with the staff bargaining committee are in direct opposition to their public statements. Many of us have worked at Mills for years. Some of us are alumnae. I have worked here for over fifteen years, and am an alum twice over, with a BA and an MA. Our staff are a crucial part of the fabric of Mills. We have relationships with the students; we implement the programming that the students are here for; we keep the college running. Our students deserve to know that they will have some sort of continuity as they navigate this change. Experienced staff can provide that. We both need and deserve written commitments through collective bargaining that assure us that we won’t be disposed of when or before Northeastern takes over. So far, the administration is refusing to do any of these things. It’s unacceptable.”

Kate Beckwith, union member and the Communications Coordinator for the Alumnae Association of Mills College, spoke about the possibility of the acquisition by Northeastern University of Mills and the treatment that the Mills administration has taken toward the Staff Union:

“The Staff Union is cautiously optimistic about the acquisition. People really care. Our union, like Mills College itself, is based on social justice. That is why it is all the more disappointing that the administration’s refusal to participate in the collective bargaining process not only arguably violates federal labor law but is clearly in contrast to the image Mills projects of itself as a social justice-minded institution.

While making public-facing statements and taking interviews with the press, President Hillman claims that the Northeastern acquisition of our college has broad support from faculty and staff. That it would allow the college to keep us employed, but we haven’t been offered any guarantees in writing or even verbally in the collective bargaining process. They have explicitly said the opposite to us. Many of our members have been working at Mills for several years, and some of us are alumnae, like me. So far, the Northeastern administration has not indicated that they will recognize the unions or negotiate impacts with the union. So, this is why we are out here today, rallying support and marching across campus to demand that we have a seat at the table and a voice in the future of our beloved college.” 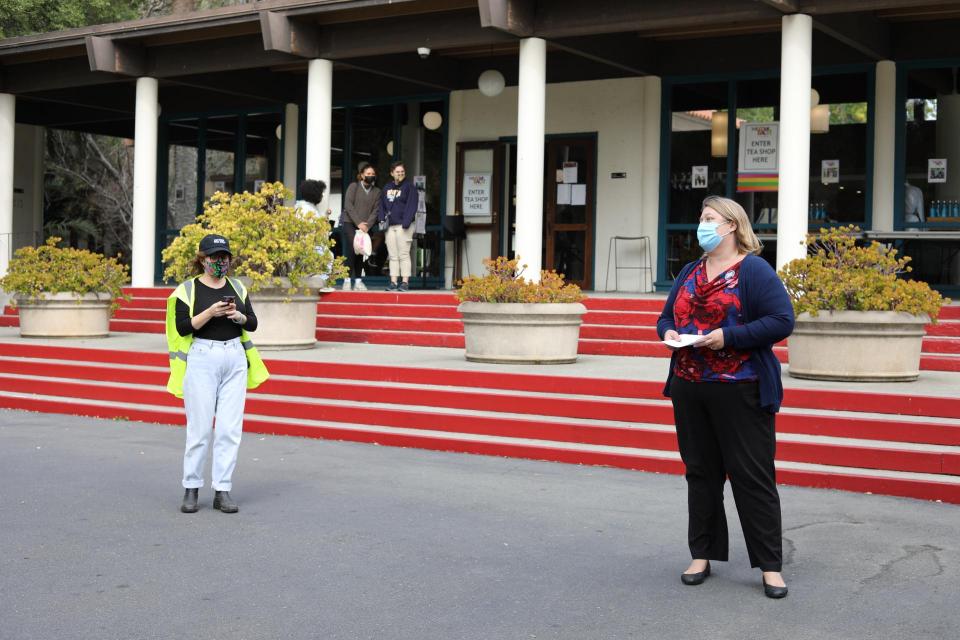