Members working for the Town of San Anselmo reach a new one-year contract extension, and first-time bargaining team member Mattie O’Grady reflects back on the process 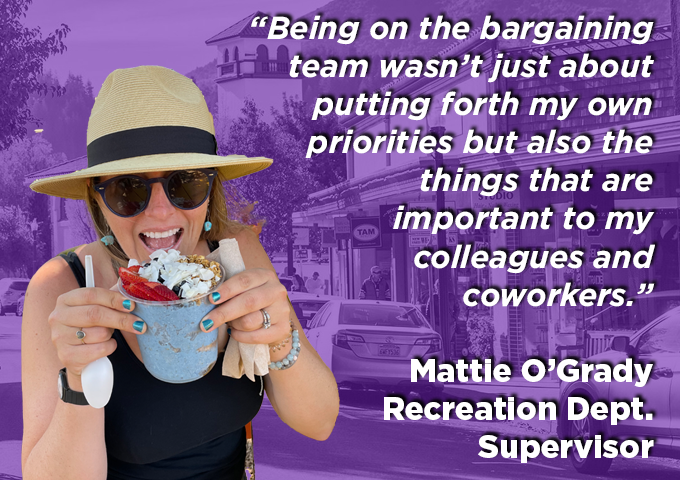 Congratulations to our members working for the Town of San Anselmo, who just settled a 1-year contract extension! Bargaining during COVID has presented a whole new set of challenges to the negotiations process, but members were pleased that they could reach an agreement quickly, including Mattie O’Grady, a Supervisor in the Recreation Department and first-time bargaining team member for SEIU 1021.

“The person who had been on the bargaining team for a long time in our department retired a few years ago, and we had two department members step up for the last year, but this year it was just sort of my turn to step up and play that role. I’m always open to learning new things and trying out new opportunities so I wouldn’t say that I was nervous, but I was definitely interested to see how it all works,” said Mattie.

Reaching an agreement took about 4 bargaining sessions, which were all conducted over Zoom. 1% raises will go into effect in both July of this year and January of next year.

Mattie was surprised at how smoothly things at the table went in this most recent round of negotiations, saying, “Obviously because of COVID, these negotiations were different than normal. Things were all done via Zoom and we moved quickly and collaboratively in reaching a resolution. There’s a lot of uncertainty around the impacts of this pandemic on the town’s budget, of course, but I’m grateful we secured an agreement that will reward our members for their work and sacrifices throughout this time.”

“For me personally, it was really important to keep an open mind and remember that I was bargaining for the greater good and not just for myself. Being on the bargaining team wasn’t just about putting forth my own priorities but also the things that are important to my colleagues and coworkers,” Mattie said. “I would say that I was a little hesitant to get involved at the beginning but I’m so glad I did. Our union is a big part of our life at work and it was a great learning experience. I saw my role as representing everyone’s values and views at the bargaining table, and I was proud to do that. I’d like to thank my colleagues, fellow bargaining team members, and SEIU1 021 Field Rep. Joel for all of their hard work throughout this process.”