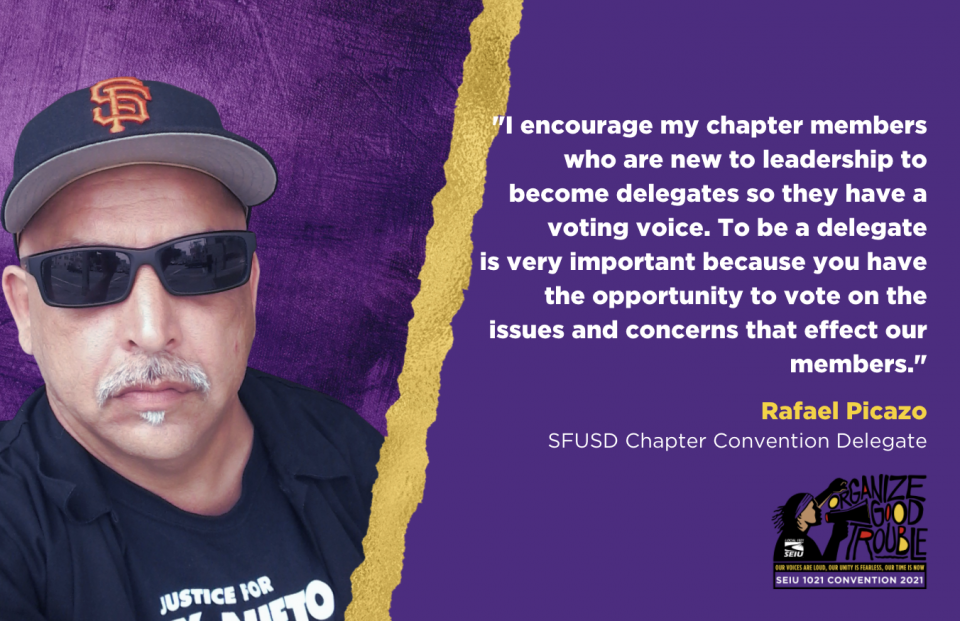 What is your name, title, and chapter?

I’ve worked for SFUSD for the last 38 years in the Environmental Health Department. I also serve as the SFUSD Chapter President.

Is this your first time as a chapter delegate for the convention?

No, I’ve been a delegate a few times over the years and attended many conventions in the past as a Delegate.

What was your experience as a first-time delegate?

My first time as a delegate was a long time ago but I remember enjoying the company and all the people I met. Also, I remember learning how we get things done as a union and how we work together to accomplish our goals. We discussed the issues and concerns of our members and strategized about how to be unified in supporting our membership. Unifying our membership and supporting each other was a big theme.  It was nice to support each other, especially the smaller chapters in the union. There was music and dancing after the convention but the best part was getting to know each other.

What inspired you to become a chapter delegate for a second time?

I was inspired by my past experiences meeting the other chapter delegates and continuing to learn about how we organize as a union to get things done. I am inspired by how we work together as a union.

Why do you believe members should get involved as delegates for their chapters?

I believe it’s important to refresh how members view the union in their minds and to learn new ways to run our chapters and organizing campaigns more efficiently. If you are a new delegate, you get to meet new people in the union from the e-board all the way down to chapter leaders and staff. It’s good to know how other chapters are organizing and what they are doing in the field. I encourage my chapter members who are new to leadership to become delegates so they have a voting voice. To be a delegate is very important because you have the opportunity to vote on the issues and concerns that affect our members.

As a delegate, what impact do you hope to have at the convention?

Personally, I want to rebuild the local in the San Francisco area. When I was younger in the mid-’90s, we were SEIU 790 and the membership had a strong voice in the union. Today, I don’t see that same strength in our membership. I see a lot of members walking away from the union and I want to focus on building the skills and techniques that will get people to come back into the union. The union represents us and protects us from everything from health and safety concerns to health benefits, and keeping pay scales up to par with the cost of living. I believe our members can have a deeper understanding of the union difference and I want to learn techniques that will help with outreach to get our members involved in the union again.

The party was my favorite part. The dancing and everyone having fun was the best part. Learning other’s roles in the union was also very interesting. Meeting folks in departments like communications and research helped me to learn more about the union structure.  Learning who all the staff and members and chapter leaders are was my favorite part. It’s always important to know who does what in the union and what roles people play so you know where to go when you have questions and you know who can answer them.

What would you like to see in the virtual member convention this year?

I want to see a lot of Q&A sessions for the delegates to participate in. I want to see the conversations continue. I think we have to encourage the members who will be present but won’t have a voting voice like the delegates do to participate and stay engaged.  We have to focus on the importance of building up our union The last convention I attended was “Stronger Together” at the Oakland Hilton. That was such a great message — to say that we are working stronger together. That message solidifies the idea that we want to help the members understand the work we do and the importance of being a union member.