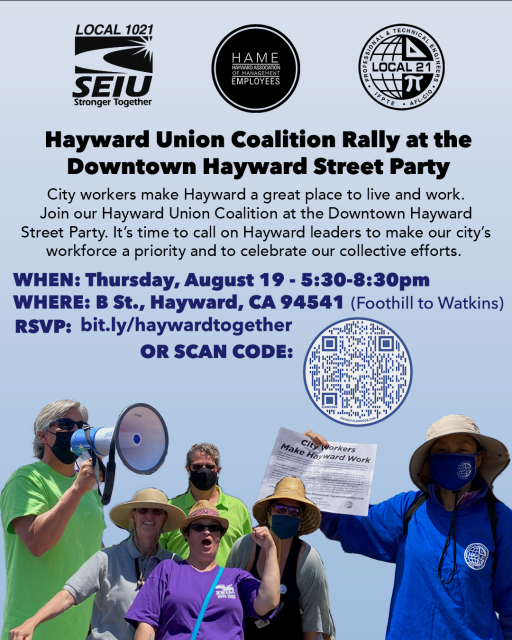 This Thursday, August 19, from 5:30 to 8:30, SEIU 1021 members in coalition with IFPTE Local 21 and Hayward Association of Management Employees (HAME) workers will join the City’s downtown party to celebrate the work they do and show the city that it’s time to honor that work and the workers who do it.

All three unions have been bargaining new contracts with the City for months. Among the issues they are highlighting together are sub-standard wages that make the City an unattractive employer in the region. This has helped worsen what the workers say is a recruitment and retention problem that leaves many positions unfilled. So far, the City’s representatives haven’t even committed to doing more than studying the issue, despite repeated calls for them to make things right and raise the wages of underpaid workers.

SEIU 1021 East Bay Vice President Yeon Park said, “Our union siblings in Hayward work hard every single day to make the city a special place. They are in coalition to make sure everyone there can thrive, including the working people do so much for the whole community. Please come out on Thursday to help celebrate the important work they do and show them that their whole union is behind them!”

At the Downtown Street Party, members from all the unions will be rallying together at 6:30 p.m. The San Francisco Poster Syndicate will be screenprinting and giving away posters live on site from 5:30 on, and there will be petitions to sign and giveaway items. The whole thing is family-friendly and will be a great chance to have a good time while showing some union solidarity with the workers who work to make Hayward a great place to live, work, and play.