“This is an important bill”–Governor Newsom signs AB 736, Setting a Wage Floor for 20,000 Adjunct Faculty Members in California, Including More Than 500 SEIU 1021 Members 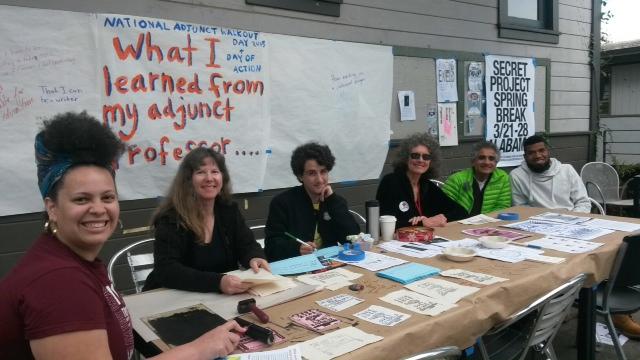 Anne Wolf, an SEIU 1021 member at California College of the Arts, where she is a senior adjunct professor, said “This is an important bill that sets minimum pay for adjuncts. In an already undercompensated profession, starting salaries can be quite low and often without benefits. The cost of living in California makes it especially difficult for adjuncts working here to make a living wage, and this will help.”

Across California, there are nearly 20,000 adjunct professors, many of whom are paid a flat rate of two or three thousand dollars per course, and limited to teaching only four or five courses per year. This is far from a living wage, and Lance Winkle, a part-time lecturer at Otis College of Art and Design and member of SEIU 721, estimates that some adjuncts will see as much as a 50% wage increase as a result of this bill.

Anne Wolf has been with CCA for nearly 20 years, and said “Teaching is a vocation that requires skills, credentials, experience and dedication. Adjuncts, who now make up the majority of faculty in Higher Education, often struggle to gain the most basic conditions of employment: Fair compensation, benefits and job security.” At seven Bay Area colleges, more than 500 adjunct faculty members have joined together to form union chapters with SEIU 1021, and some have scored big wins for job security, wages and benefits,and fairness in discipline and course assignments.This historic bill sets a wage foundation that will help the adjuncts set their sights higher as they fight to make their workplaces fairer and their working conditions better.

As Anne Wolf concluded, “The role Adjunct Professors play in higher education is a crucial one, yet Adjuncts have been historically underpaid, undervalued, and exploited. This is a step toward fixing that.”