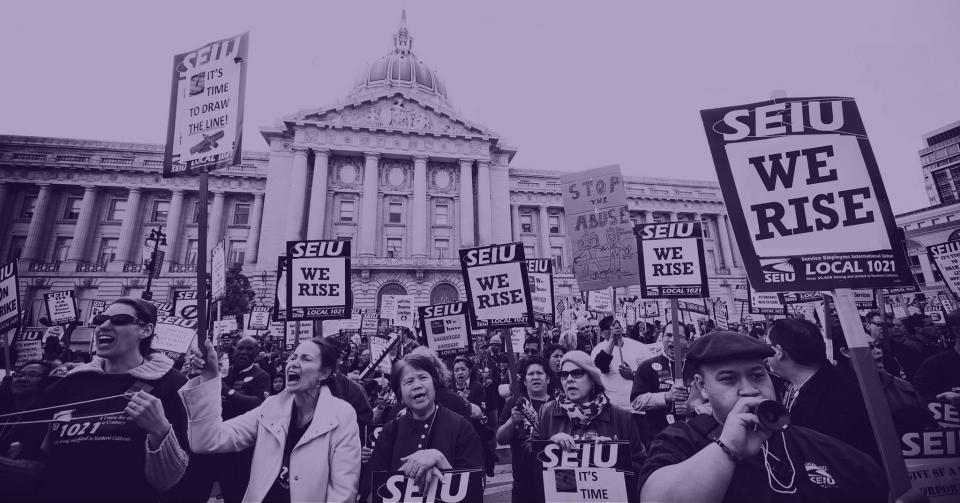 Bay Area workers to protest billionaire-driven effort to use Supreme Court to further rig the system; #WeRise actions at workplaces call for more good, union jobs in our community

The San Francisco Bay Area’s working people will respond to Janus vs. AFSCME oral arguments by pledging to stick together and demonstrating why America needs union jobs

[San Francisco, CA] – Monday, February 26th at noon, hundreds of workers, community leaders, and allies will gather at City Hall in San Francisco to speak out as the Supreme Court begins hearing oral arguments in the Janus vs. AFSCME case, the latest attempt from corporate interests to prevent workers from uniting in unions. Union workers including nurses, librarians, parks and recreation workers, social workers, MUNI workers, and homecare workers will by joined by fast food workers, gig economy workers and others seeking better conditions for themselves and their communities.

“My coworkers and I help keep people off the streets. Being part of a union helps us speak out for safe working conditions and to improve programs for the people who rely on us,” said Janay Washington, a San Francisco homelessness and supportive housing caseworker and SEIU 1021 member.” Corporations that are funding the Janus court case are trying to keep us from uniting, but we won’t let them. No billionaire-funded propaganda campaign is going to divide us or keep us from sticking together and calling out the injustices at work or in our city.”

Monday’s action is one of more than 600 similar actions at worksites across the nation that will send a message that working people won’t be deterred by this latest attack on their collective power from joining together in unions. The court case being heard at the Supreme Court, Janus v AFSCME, seeks to overturn legal precedent that guarantees public sector workers the right to organize in a union and have the resources to collectively bargain with employers.

WHAT: “Rise Up Day of Action” Rally to protest the effort to weaken America’s working families

WHERE: Steps of San Francisco City Hall
For a complete list of the nationwide actions visit seiu.org

WHO: Workers including teachers, nurses, parks and recreation workers, janitors, and homecare workers who keep our Bay Area communities safe, clean and healthy places to live and work in. These workers are united in the following unions: SEIU locals1021, 1000, 2015, Committee of Interns and Residents, USWW, California Faculty Association AND CSUEU members, non-union workers, elected officials, and labor, community and civil rights leaders