By Holding Firm and Not Backing Down to the Mayor, City of Oakland Workers Win a Contract Extension with No Concessions 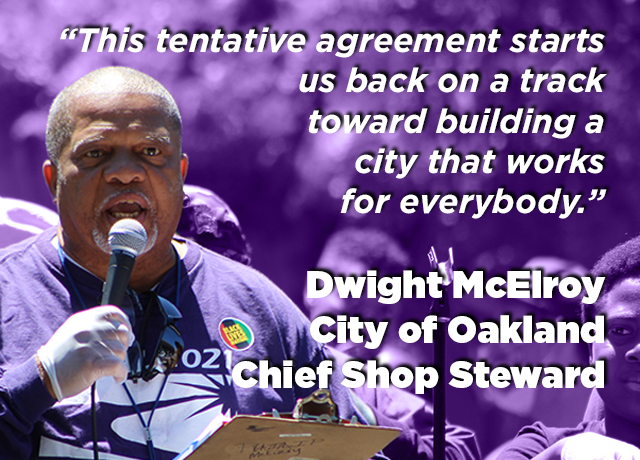 On May 18, the elected Bargaining Team for the SEIU 1021 City of Oakland chapter signed a tenatative agreement with the City. The agreement extends the chapter’s existing contract for a year, with no concessions or takeaways, and adds an across-the-board 3% raise for all members, effective the first full pay period in July of this year.

In a time of uncertainty and insecurity, a contract like this, with no give-backs and a COLA, is a big achievement. To get this win, 1021 members worked hard to elect a progressive, pro-working-family City Council in Oakland, and, worked in community groups advocating a just recovery for all, formed a powerful union coalition with CMEA, IAFF 55, IBEW 1245, and IFPTE Local 21, and showed solidarity against Mayor Libby Shaaf’s repeated attempts to balance the budget on working people’s backs. The Mayor’s attacks included demanding more than a month’s worth of unpaid furlough days last summer, and threatening layoffs and withheld raises just before Christmas of last year. The chapter held fast and never wavered in its demands to be treated fairly and equitably, and, in the end, working people stuck together and prevailed.

As Street Maintenance Leader and Chief Shop Steward Dwight McElroy said, “This tentative agreement starts us back on a track toward building a city that works for everybody. Getting this agreement signed took a lot of hard work. It took the community, our members, our union coalition partners, and our political allies all putting the needs of Oakland’s residents first, and the result was an extension that is fair for our workers and the community. It shows what we can accomplish if all parties come together with one thing in mind: what’s best for all, not what’s best for some.”