“History was made today”: A Historic Coalition Helps Working People in Hayward Speak Up for a Fair Contract and Services for the Whole Community 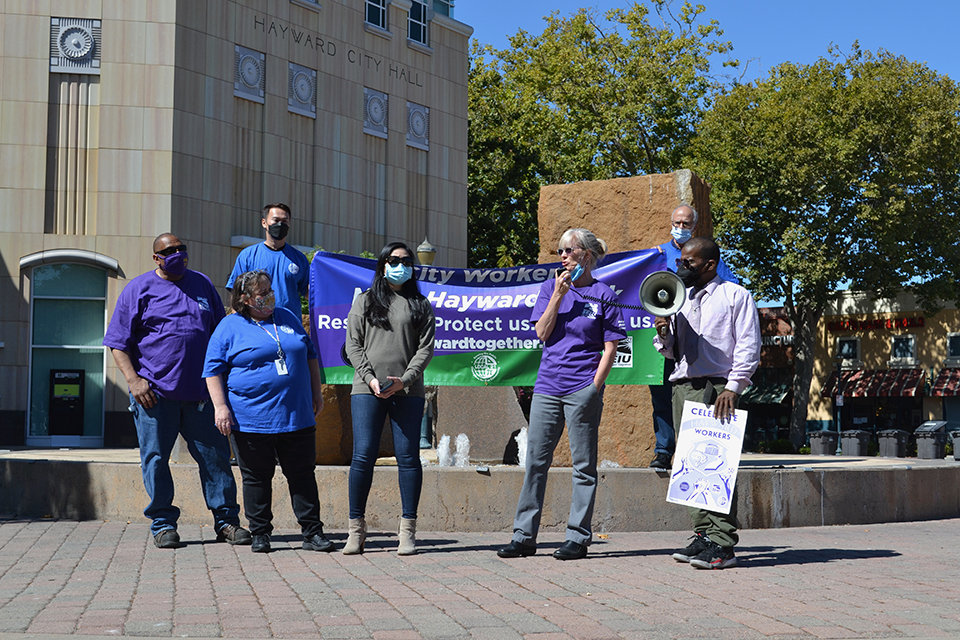 Hayward City workers have had enough of City leaders slow-playing contract negotiations and refusing to invest in services for the community, and are fighting back–together. A coalition has brought workers from SEIU 1021, IFPTE Local 21, and HAME (Hayward Association of Management Employees) together to tell the City that these are the workers who make Hayward work, and they deserve better.

On Tuesday, September 28, around 100 workers rallied in front of City Hall to show their solidarity. Robert Mitchell, a Senior Maintenance Leader in the Traffic Division, has been with the City for 27 years. He said, “This is a historical moment, with all the unions together, rallying to let City Hall know that we’re all together, we’re not going to separate. We just want to be treated fairly–all of us! We have people behind in wages. Some are 30% behind. We’re the heart of the Bay, so treat us that way!”

Mitchell concluded, “History was made today. Never have the three unions come together like this. This coalition is a beautiful thing.”

Suzanne Philis is a Senior Secretary in the City Manager’s office, and she addressed the rally to say, in part, “Nobody will give you anything if you don’t demand it. We’ve learned from the past that you have to ask and you have to speak up and you have to make them uncomfortable. I hope everybody will show up. If you don’t show up, they think you don’t care! You gotta speak up.”

To learn more and find out how you can get involved in the fight for a fair contract and good city services, visit haywardtogether.org.